Please ensure Javascript is enabled for purposes of website accessibility
Log In Help Join The Motley Fool
Free Article Join Over 1 Million Premium Members And Get More In-Depth Stock Guidance and Research
By Rick Munarriz - Updated May 7, 2021 at 3:47PM

Investors bailed on Roku on Thursday. They're regretting it on Friday after a blowout quarterly report.

It takes a lot to send a stock reeling just minutes before it reports fresh financials. Shares of Roku (ROKU 3.92%) plummeted nearly 7% on Thursday. It was a rough day for high-octane growth stocks, but some of the market's streaming leaders clawed their way back to positive gains by the end of the day. Roku got left behind.

One can argue that investors feared Roku would disappoint the market with its first-quarter performance. We've seen high-flying stocks swoon even after largely decent quarterly updates. The rub here is that the stock closed on Thursday 42% below the all-time high it hit less than three months ago. There was no crust of optimism on this earnings pie.

The market was more indifferent than outright bearish with Roku. The stock's short interest is a third of what it was a year ago. Wall Street had come down with Roku fatigue. Bulls and bears alike were ho-hum about the streaming pioneer, probably figuring that it would be hard for it to come through with monster financials after packing years of growth into just a few months during the pandemic. Roku was about to give everybody who'd left it for dead a big surprise. 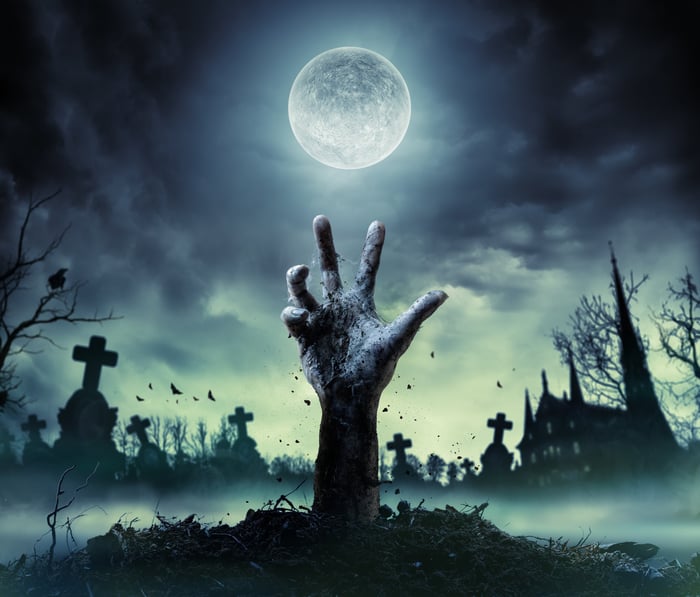 Just around the time that Roku stock was hitting all-time highs in mid-February, it issued guidance calling for $478 million to $493 million in net revenue, a 49%-to-53% increase over the prior year's showing. Roku has historically been conservative in its outlooks, but analysts on average looking for 53% year-over-year top-line growth suggests that they thought Roku wasn't going to pull a rabbit out of the hat.

Revenue soared 79% to hit $574.2 million for the quarter. Platform revenue more than doubled, now accounting for more than 80% of the revenue mix. This is naturally the high-margin segment for Roku over its now significantly smaller hardware business, but even there analysts couldn't piece it all together. All 24 analysts covering Roku expected a quarterly deficit. Roku is clocking in with a net income of $0.54 a share.

This is the third time in a row that Roku has scored a profit as Wall Street pros were bracing for a loss. Let's hope those crystal balls have money-back guarantees.

Roku's popularity continues to expand. It had 53.6 million active accounts by the end of March, a 35% increase over the past year. We're now lapping the start of the pandemic, when we did a lot of streaming during the "shelter in place" phase of the COVID-19 crisis, but the record 18.3 billion hours streamed by Roku users in January, February, and March combined this year is 49% ahead of where it was a year ago.

Good things happen when consumption is growing faster than an audience headcount, and Roku is a dinner bell for marketers right now. With advertisers hungry to reach viewers who can no longer be accessed through old-school linear television, average revenue per user for the otherwise free Roku service has risen 32% over the past year. Average revenue per user is now $32.14 over the trailing 12 months, and that figure keeps moving higher as connected TV advertising continues to boom.

Things aren't perfect. Roku wasn't able to provide an update on its tiff with Alphabet's (GOOG 2.36%) (GOOGL 2.39%) YouTube TV during Thursday afternoon's earnings call. It's a lose-lose distraction that could hurt both parties if it's not properly resolved.

Thankfully, that's pretty much the only blemish on the next-gen media stock's beat. Roku's guidance for the current quarter calls for revenue growth of 71% to 74%, a forecast that's even more impressive given how Roku historically undersells its reality. Gross profit is expected to more than double. I think the days of analysts fetching red-ink pens are done here. The days of investors cashing out moments before a Roku earnings report might be toast at this point, too.