Please ensure Javascript is enabled for purposes of website accessibility
Log In Help Join The Motley Fool
Free Article Join Over 1 Million Premium Members And Get More In-Depth Stock Guidance and Research
By Adria Cimino - May 9, 2021 at 6:00AM

The question is whether it will hurt future revenue -- or not.

Moderna's (MRNA -5.93%) success story is all about its coronavirus vaccine. The product generated a whopping $1.7 billion in revenue in the first quarter and brought the company its first ever quarter of profitability. This is big -- especially considering Moderna didn't have any commercialized products until regulators authorized the vaccine in late December.

Investors are hoping this is just the beginning of Moderna's coronavirus vaccine revenue growth. It should be. Experts say the virus is here to stay. And Moderna is ramping up to produce 3 billion doses next year. But one threat to revenue could be on the horizon. And it has to do with the potential waiving of vaccine patent protection. But is this really a threat? Let's take a closer look. 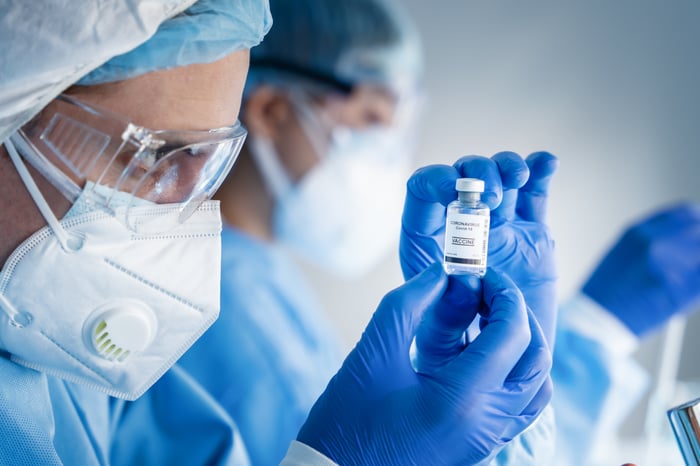 This week, the U.S. said it would support a controversial proposal to waive vaccine patent rights to ramp up the production of doses globally. Now, all World Health Organization members must weigh in on the issue. Meanwhile, shares of Moderna slipped 8.6% this past week. Some investors were concerned that a potential approval of such a proposal would hurt Moderna's ability to generate future revenue from its vaccine.

From an intellectual-property point of view, waiving patent rights may set an unwanted (at least by healthcare companies and their shareholders) precedent. That's because it may make it easier for countries to repeat the move in the future. And in some cases, that could weigh on a company's ability to generate revenue from a product.

But the Moderna story is a bit different. Here's why: Moderna could easily hand over instructions to make its mRNA vaccine. In fact, last fall the company said it wouldn't enforce its COVID-19 patents during the pandemic.

But this doesn't mean anyone else can actually produce the vaccine. Imagine trying to make your grandmother's signature cake recipe. But you don't have access to the key ingredients, the right pan, or even a proper oven. That's similar to the situation of potential vaccine makers if they hope to replicate the Moderna vaccine.

In Moderna's earnings report on Thursday, CEO Stephane Bancel said a possible waiver "doesn't change anything for Moderna" and added:

There is no mRNA in manufacturing capacity in the world. This is a new technology. You cannot go hire people who know how to make the mRNA. Those people don't exist.

Bancel is right. The skilled workers, the manufacturing processes and equipment, and the production scale-up are roadblocks potential producers are unlikely to move past. And even if a rival decided to dive in and give it a try, the effort would take an extraordinary amount of time and money. That's because Moderna's original effort took a lot of time and money too.

Moderna may look like an overnight success. After all, it brought the coronavirus vaccine to market in about nine months. But the company has been working on mRNA technology for years. And government investment of $2.5 billion wasn't just an order for doses. Some of the funds helped Moderna develop the vaccine and build up manufacturing capacity over the past year.

So, for a patent waiver to actually hurt Moderna, governments would have to help potential vaccine makers by investing in manufacturing facilities and raw material production. They would have to help companies create processes and train workers. It seems very unlikely such a scenario will play out.

The potential patent waiver isn't a threat to the Moderna vaccine. Whether its approved or not, Moderna is likely to remain in control of its product well into the future. And from what we can see so far, Moderna's vaccine profit prospects remain strong. The company is in discussions for 2022 orders with all countries that ordered vaccines this year. And all of this means investors shouldn't worry about any dips in the biotech company's share price related to vaccine waiver news.