Please ensure Javascript is enabled for purposes of website accessibility
Log In Help Join The Motley Fool
Free Article Join Over 1 Million Premium Members And Get More In-Depth Stock Guidance and Research
By Rick Munarriz - May 10, 2021 at 11:55AM

The House of Mouse has a big earnings report coming on Thursday.

It's time for Mickey Mouse to say "cheese" for his company's quarterly snapshot. Walt Disney (DIS 4.68%) reports its fiscal second-quarter results on Thursday afternoon, and the stakes are high with the shares approaching the all-time highs hit back in March.

The media giant has been coasting on the strength of Disney+ through the pandemic, but now it's time for other segments to start carrying their own weight. With Disneyland finally reopening in April and Disney movies returning to the multiplex in March investors are ready to weigh the bellwether on more than just a fast-growing streaming video platform that won't be profitable until 2024. There's a lot for Disney to prove this week, and investors know it. 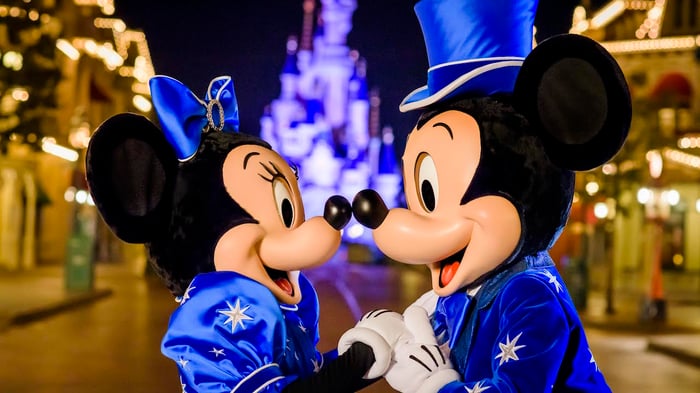 Analysts aren't holding out for much when Disney unveils its financials shortly after Thursday's market close. The $15.87 billion that Wall Street pros are forecasting on the top line is 12% below where it landed for the same three months a year earlier. It will be the fourth consecutive period of double-digit year-over-year declines in revenue, and thankfully it will be the last. The comparisons will get a lot easier starting in the current quarter.

The market also isn't getting greedy on the bottom line. The analyst consensus of $0.28 a share in earnings for the first three months of the calendar year is less than half the $0.60 a share it rang up in the prior year. An encouraging trend on that front is that Disney has landed well ahead of where Wall Street was parked in each of the past three quarterly reports.

The look ahead should be a lot kinder than the look back. Disney's slate of theatrical releases will start picking up with the live-action Cruella origin story later this month. Restrictions are starting to lift at Disney World, and it's quite possible that capacity restraints will be eased heading into the telltale summer travel season. Even Disney's cruise ships -- the last of its businesses to get back online -- could be eyeing a resumption of travel in the coming months.

The return of Disney's previously shuttered businesses will help ease any potential slowdown at Disney+. There are no signs that the premium streaming video service is peaking, but after hitting 100 million subscribers in record time it will be harder for Disney+ to wow investors of a stock that is now commanding an enterprise value of $390 billion.

Global travel restrictions will be a near-term challenge, and not every country's economy is recovering at the same pace as the U.S. However, in a world of media stocks where content is king it's hard to deny that Disney is the one that wears the crown with its unmatched franchises.

Will Disney resume paying its dividend? Is churn holding up at Disney+ given the recent pricing increase? Is there any visibility on opening up Disneyland to more than California residents or boosting Disney World's capacity above its recent 35% level? Will there be any shifts to the digital distribution strategy of its upcoming theatrical releases? There are a lot of questions out there. Disney won't answer all of them. It probably won't even answer some of them. Investors will still get a clearer picture of the state of Disney by the end of this week.