Please ensure Javascript is enabled for purposes of website accessibility
Log In Help Join The Motley Fool
Free Article Join Over 1 Million Premium Members And Get More In-Depth Stock Guidance and Research
By Jason Hawthorne - May 12, 2021 at 6:14AM

A new agency could help fund the attack on this chronic disease.

One of the most notable items in Joe Biden's recent budget proposal is $6.5 billion to create an agency called the Advanced Research Projects Agency for Health, or ARPA-H. The naming is intended to mirror DARPA, the defense agency that had a hand in producing the internet, GPS, and Boston Dynamics robots like this.

The goal of the agency would be to lead the charge in curing cancer, Alzheimer's, and diabetes. The latter affects just over one in 10 Americans and accounts for 24% of healthcare spending by some estimates. If the agency is created, that could send funding toward cutting-edge diabetes research from companies like CRISPR Therapeutics (CRSP -1.79%) and Vertex Pharmaceuticals (VRTX -1.22%), as well as those helping better manage the disease like Teladoc's (TDOC 0.53%) Livongo unit. 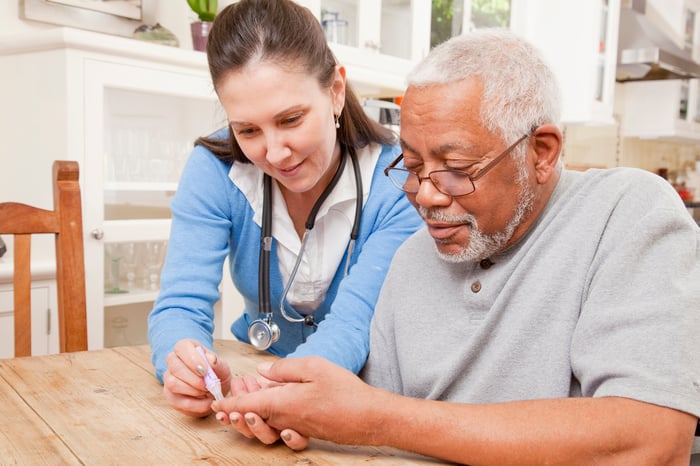 Perhaps the most exciting recent study in diabetes has been the use of clustered regularly interspaced short palindromic repeats (CRISPR)-Cas9, the gene-editing tool, to reverse diabetes. One of the primary ways diabetes develops is a shortage of insulin-producing beta cells in the pancreas. A 2016 study sponsored by the National Institutes of Health showed that transplanting pancreatic cells can come close to curing type 1 diabetes. That procedure comes with some drawbacks. It requires a hard-to-find cadaver donor, and the recipient must take immunosuppressant drugs to prevent the body from rejecting the transplant.

To get around those constraints, ViaCyte and CRISPR joined forces in 2018, using CRISPR, to engineer stem cells to be immune-evasive, insulin-producing pancreatic cells. Preliminary results have shown that these cells do indeed mature into normal human pancreatic tissue. That could serve as a functional cure for many type 1 diabetes patients.

CRISPR and ViaCyte aren't the only companies taking this approach. However, they do have a head start. In February, the pair announced the initiation of a phase 2 study for the treatment. Initially, they are recruiting 10 type 1 diabetes patients with plans for as many as 70 in total. Data is expected in the second half of this year.

If the method continues to show positive results, the new agency could put significant funding behind an expanded study to make the treatment available sooner. That would mean revenue for CRISPR that the market likely isn't anticipating anytime soon. A positive surprise like that would undoubtedly benefit shareholders.

Vertex is another company developing a cell therapy for type 1 diabetes. The $55 billion biotech acquired Semma Therapeutics for its treatment in 2019. Semma's therapy was developed by co-founder Douglas Melton at Harvard University, where he showed it could produce working pancreatic cells in mice.

In March, the company announced it was beginning human testing. The study will initially enroll 17 participants and isn't slated to conclude until 2024. Both Vertex and ViaCyte have received fast-track designation from the Food and Drug Administration (FDA). That will expedite the review of trial data. The new administration would no doubt love to have a potential cure for type 1 diabetes to prove the value of ARPA-H. If the 2021 budget ultimately includes funding for this agency, expect Vertex to get all the support it wants to make that a reality.

A company taking a different approach in helping support diabetes patients is Teladoc. By acquiring Livongo last year, the telemedicine company added chronic disease management to its services. That portfolio also includes primary care doctors, specialists, and general medical appointments. Its position at each step in the patient journey helps identify those with undiagnosed diabetes, as well as ensure existing diabetic patients get the proper care and take appropriate steps to best manage their disease. The approach works.

In 2019, Livongo and Eli Lilly teamed up for a retrospective analysis of about 10,000 patients. It showed members of Livongo's diabetes program saved $88 per month on healthcare costs. The longer members had been enrolled, the greater the savings. In another study by the company, those at risk for type 2 diabetes saw an average weight loss of 10 pounds after one year in the digital diabetes prevention program.

This type of preventative care was one of the goals of expanding health insurance through the Affordable Care Act (ACA) in 2010. With Biden in the White House, access to coverage has already been expanded. One million people have taken advantage of a special enrollment window to sign up for coverage. Although much of the early conversation from the budget proposal has been on curing diabetes, increased funding should also flow to companies that can demonstrate both better outcomes and lower costs.

With data to prove its value and a push to increase coverage for Americans, Teladoc looks to be in the right place at the right time. Investors will have to keep a close eye on language in the formal budget request, as well as in what is enacted by Congress this fall. However it is spelled out, it's hard to imagine a scenario where there isn't more emphasis put on the kind of service that Livongo provides.