The housing market is booming, especially new construction in hot markets from Idaho to Texas. That means higher demand for lumber, which is outpacing what sawmills can handle.

The stock market has more than doubled from the COVID-19 low in late March 2020 while lumber prices have more than quintupled, notching another record high on Friday at more than $1,600 per thousand board feet. As one of the largest timberland owners and sawmill operators in North America, Weyerhaeuser (NYSE:WY) is a key beneficiary of the lumber boom. The company is posting some monster results, but it's really strong fundamentals that are paving the way for lasting gains. Here's why Weyerhaeuser is positioned to thrive beyond the current housing boom. 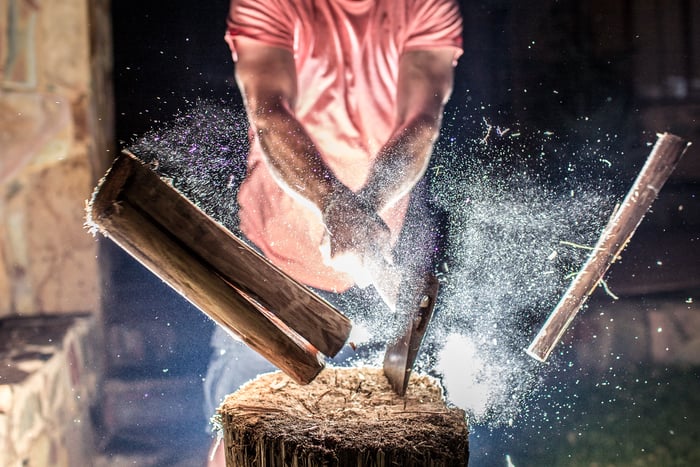 After peaking around the beginning of 2007, shares of Weyerhaeuser have underperformed the S&P 500 (including dividends). 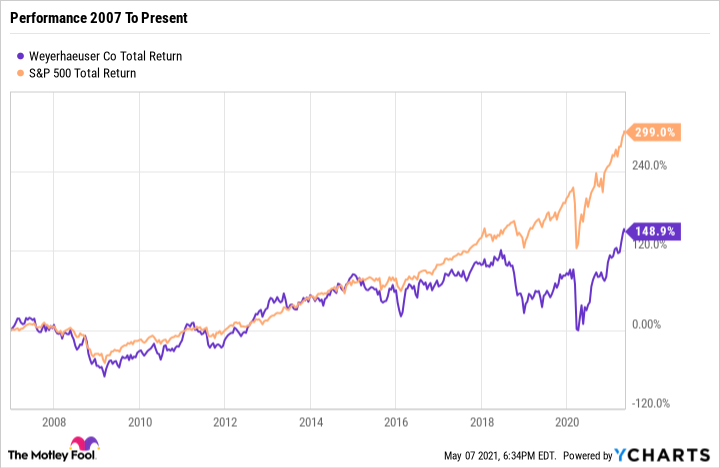 Before the housing crisis, a burst in spending led to surging profits for timberland owners and sawmills. It also left them more exposed to the housing downturn. Weyerhaeuser recorded its worst year on record in 2008, losing $1.2 billion. Since then, it has shifted its business model to a more conservative approach. The results have been good, as the company has been able to increase its profitability while lowering spending. 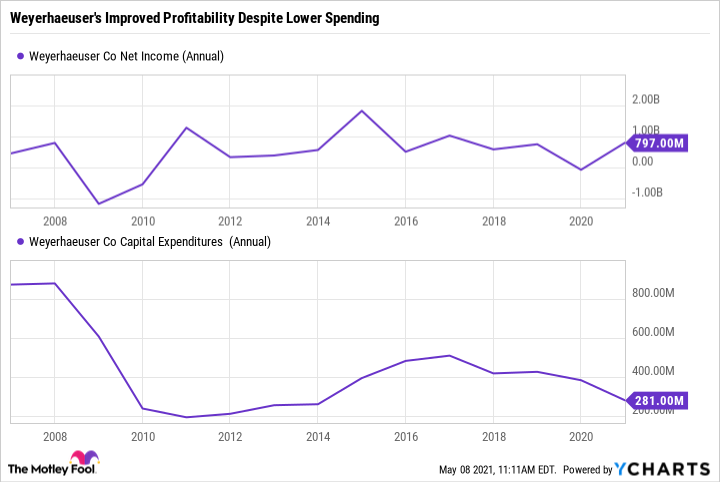 Weyerhaeuser manages 10.7 million acres of U.S. timberlands and has long-term licenses for over 14 million acres of Canadian timberlands, making it one of the largest timberland owners in the world. Managing its forests, selling land, and selling logs is part of its business, but the main industry is turning logs into wood products. In fact, its timberland business recorded its lowest revenue in five years in 2020 due to a sharp decline in western log production. Yet even with that underperformance, Weyerhaeuser had $2.2 billion in 2020 adjusted EBITDA, its highest in 15 years.

To illustrate how good business is for Weyerhaeuser right now, consider that it earned $681 million in net income in the first quarter of 2021, which is 85% of what it earned in all of 2020. With management guiding for a strong second-quarter performance, the company could very well book its highest annual profit in history this year.

Weyerhaeuser's big advantage over its peers is its integrated business model that consists of access to a reliable timber supply, high manufacturing capacity, and a distribution network.

Right now, there's a particularly large spread between the price of timber and the price of lumber, which the company is able to take advantage of with its privately managed timberlands. Its long-term Canadian leases directly supply timber for its sawmills, which are producing the same volume of wood products as past years but for a much higher price. For Weyerhaeuser, the real money is being made on higher prices for wood products used to build houses, not so much on rising lumber prices on their own. 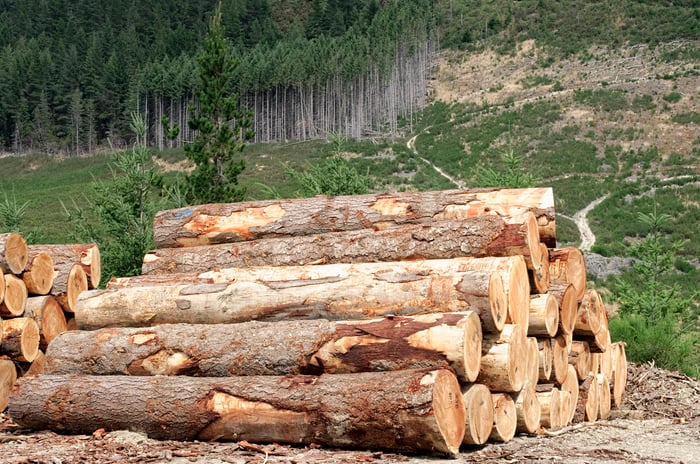 From 2016 to 2020, Weyerhaeuser produced roughly the same quantities of wood products, mainly structural lumber and oriented strand board. Yet in 2020, it earned $5.8 billion in revenue on these products compared to just $4.6 billion in 2019, $5.3 billion in 2018, $5 billion in 2017, and $4.4 billion in 2016. Simply put, the housing boom makes for easy money for Weyerhaeuser, and that's what's driving its high profit margins right now.

A dividend hike could be on the way

Like many of its peers, Weyerhaeuser suspended its dividend in spring 2020. It reinstated a $0.17 per share quarterly dividend in October, which was half of its prior payout.

On its first-quarter conference call, Weyerhaeuser reminded investors that it is committed to paying 75% to 80% of its annual adjusted funds available for distribution (FAD) in dividends. The rest is earmarked for capital expansion, paying down debt, and buying back shares.

In the first quarter, the company distributed just 20% of its FAD in dividends. Management's positive outlook also suggests the second quarter should produce tons of profit in excess of the dividend. Management is aware of how "mispriced" its dividend is and is likely to issue a supplemental dividend to make up for that. CEO Devin Stockfish mentioned that buying back shares can be an effective way of returning cash to shareholders when a company's stock is undervalued. "But absent that, I think the preference really is to distribute that via the supplemental dividend," he said.

Many leading lumber companies were burned by the 2008 housing crisis, including Weyerhaeuser. Ever since, the materials company has been conservative with its spending, focusing on preserving free cash flow (FCF) and keeping debt off its balance sheet. The recent uptick in business has further enhanced its financial position. Weyerhaeuser sports one of the best balance sheets in the industry. Its financial metrics are now at their healthiest levels in more than five years. 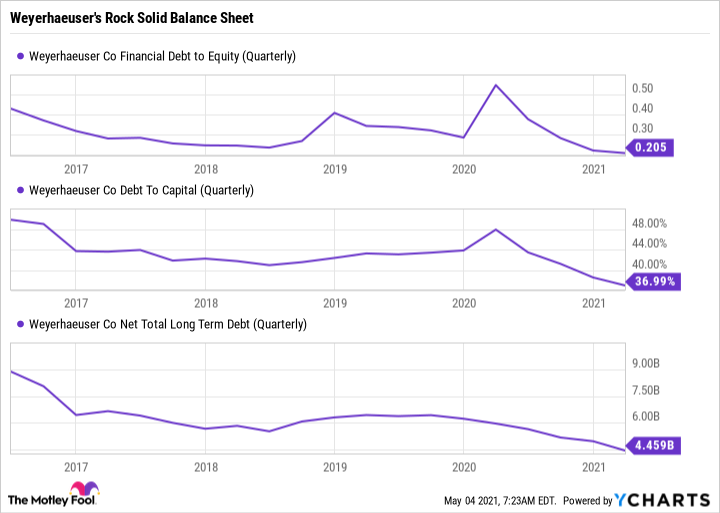 Shares of Weyerhaeuser are at their highest level since right before the Great Recession. The company's earnings growth, diversified business model, and potentially massive special dividend make it one of the most well-rounded ways to invest in the lumber market. Weyerhaeuser's strong balance sheet should help the company navigate volatility and capitalize on industry weakness if the housing market cools off.