Please ensure Javascript is enabled for purposes of website accessibility
Log In Help Join The Motley Fool
Free Article Join Over 1 Million Premium Members And Get More In-Depth Stock Guidance and Research
By Patrick Bafuma - May 20, 2021 at 6:50AM

Life sciences research company 10x Genomics (TXG -0.17%) delivered its first-quarter numbers on May 5, reporting that it grew revenues by 47% year over year, with instrument sales up by 22% and consumables sales up by 52%. The combination of increasing consumable sales and lower litigation expenses produced a mouth-watering gross margin of 84%, compared to 79% for the prior-year period.

There is a lot to like about this Cathie Wood favorite, even if the market disagreed, sending the stock down by a double-digit percentage in the wake of earnings. 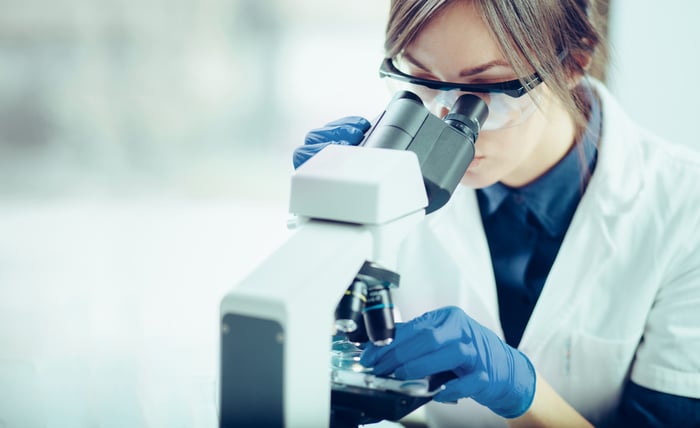 With 50% of sales occurring outside of the U.S., 10x Genomics' growth is spread out globally. Notably, all top 20 global pharmaceutical companies and all top 100 global research institutions utilize its offerings. Its platform has become a necessity for innovative researchers.

The bleeding-edge research company also anticipates a favorable funding environment, with calls for increased investment in science and research worldwide. Likewise, the latest U.S. federal budget proposal includes what (if approved) would be one of the largest annual budget increases ever for the National Institutes of Health. And while yes, the COVID-19 pandemic has sparked renewed interest in research, the company has also rapidly become the top dog in single-cell analysis solutions.

In Q1 2020, this $15.8 billion giant began to receive a great deal of interest from the immuno-oncology community. However, most biopsy samples are preserved and saved as formalin-fixed paraffin-embedded (FFPE) tissue samples -- which its Visium platform was not able to analyze. Recognizing an opportunity, the company got to work. Just over a year later, 10x Genomics is now accepting pre-orders for a new addition to its platform: Visium for FFPE. Thus far, the majority of interest has come from new customers, essentially showing that the innovative company has opened a new market for itself.

During Q1, 10x Genomics also launched low-throughput kits, which allow scientists to test-drive its product inexpensively. Rather than running costly large-scale experiments, researchers can pilot new kinds of studies or experiments at a lower scale. This encourages them to experiment with using the platform in novel ways that could lead to new use cases for it.

CEO Serge Saxonov said, "We're not so much counting on selling that particular kit, but it's what follows that kit is what we're really keen on enabling. And I think that it seems to be playing out that way."

This is what I find most endearing about 10x Genomics' management: They continue to focus on the customer and ask how to best provide the tools to allow customers to better succeed. That's what leadership looks like.

While this was not addressed on the conference call, all signs point to the company achieving profitability within the next couple of years. Its operating loss in Q1 was $19.9 million, down from $10.2 million in the prior-year quarter despite an increase in stock-based compensation from $6.7 million to $16.2 million. With $617.2 million in cash and cash equivalents at the end of the quarter, and guidance for 2021 revenue in the $480 million to $500 million range (which would amount to growth between 61% and 67%), profitability seems to be around the corner.

Then there are the headwinds that COVID-19 has created for the company. Management was quick to note that 10x Genomics does not have a significant number of sales in India, where the crisis has sharply intensified. However, they also said, "there are many indications that our customers are not yet back to normal productivity... In large part due to COVID-related protocols which have a disproportionate impact on decentralized bench experiments."

Any further challenges that keep scientists out of the lab in the U.S., Canada, or Southern Europe will likely cause short-term headaches for 10x Genomics and its shareholders. However, if vaccination levels keep increasing and the health crisis recedes further in the U.S., I think there's is a strong possibility that 10x will outperform its guidance in the back half of 2021.

All of this sounds great, so what happened?

Despite all of these positives, the market punished the healthcare stock in the days after its Q1 report, sending it from a close of $182.90 on May 5 to as low as $129 on May 11. Perhaps Wall Street was frustrated that the company did not raise guidance, or perhaps investors were concerned by its rising stock compensation expenses. 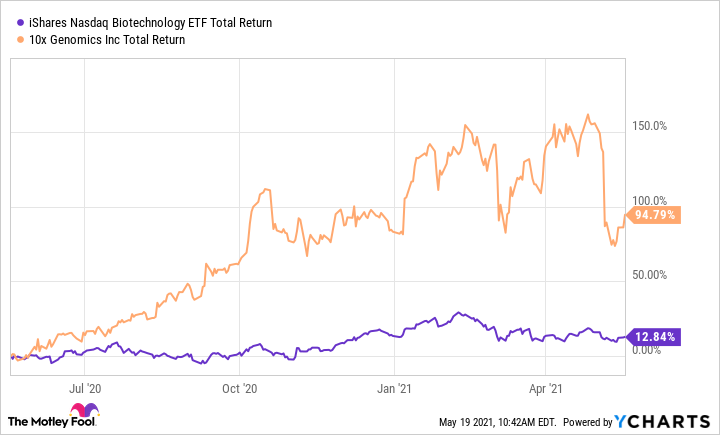 However, when I look at 10x Genomics, I see a visionary company that's growing rapidly and is trading at a price-to-sales (P/S) ratio of 32. That's a sky-high valuation, but I think it is warranted, particularly given that its spatial genomics competitor, NanoString Technologies (NSTG -2.08%), which is only growing at only 28% annually, sports a P/S of 15, while Illumina (ILMN -8.40%), which is growing revenues at 25% annually, trades at a P/S of about 14.

With 10x Genomics stock now down by almost 30% from its peak, growth investors may consider this a great moment to open a position in this revolutionary, customer-centric company.