Please ensure Javascript is enabled for purposes of website accessibility
Log In Help Join The Motley Fool
Free Article Join Over 1 Million Premium Members And Get More In-Depth Stock Guidance and Research
By Manali Bhade - Updated May 24, 2021 at 9:48AM

The U.S. equity market has been quite volatile over the past few weeks. The first three days of last week saw tech stocks falling on fears of increasing inflation and a faster-than-anticipated tightening monetary policy. Then, on May 13, Federal Reserve officials played down the risk of a tightening policy and claimed that the rising prices in the reopening economy were only temporary. On May 14, the market bounced back on this newly injected optimism. Worries over whether temporary price surges aren't, in fact, temporary, have continued to be borne out in daily market swings.

While no one can predict the short-term direction of the market, retail investors can convert this period of uncertainty into opportunity by investing in fundamentally strong and resilient stocks such as AT&T (T 1.67%), Apple (AAPL 1.62%), and AbbVie (ABBV 0.42%). These companies have the potential to sail through any market condition. 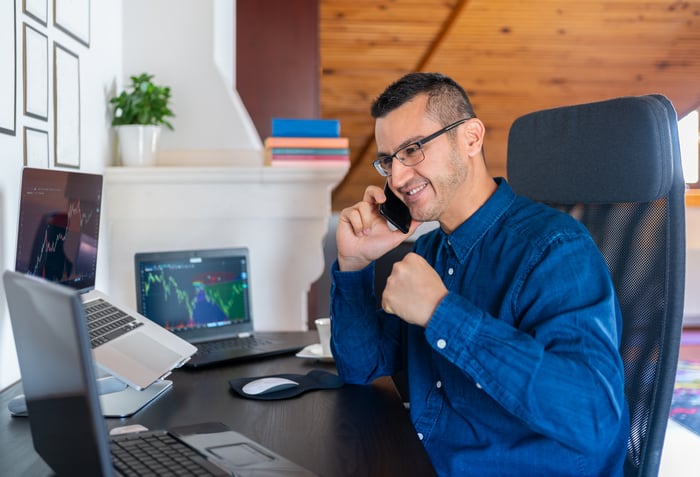 AT&T's stock has mostly languished in the past decade. However, things may take a turn for the better in the coming years. The company surpassed both top-line and bottom-line consensus estimates in the first quarter ending March 31.

On May 17, AT&T announced its decision to spinoff WarnerMedia and combine it with Discovery's (DISCA) (DISCK) nonfiction, international entertainment, and sports business assets to form a stand-alone global entertainment company. The deal has been finalized at $43 billion which includes cash, debt securities, and WarnerMedia retaining a portion of AT&T's debt. AT&T will control a 71% stake in the new company.

Subsequent to deal completion, AT&T plans to reduce its annual dividend payout from the current $15 billion to a range of $8 billion to $9 billion. Since a majority of the company's investors have preferred the slow-growing company mainly for income generation, it is not surprising that this change in dividend policy has left many of them embittered.

However, going beyond dividends, investors need to consider the potential of shareholder value creation. Free from the drag of AT&T's current net debt of $169 billion, WarnerMedia's business will now be valued more in line with its competitors such as Netflix and Disney. AT&T, Netflix, and Disney currently trade at forward price-to-earnings (P/E) multiples of 9.4, 47, and 72, respectively. With the largest content library in the world, the new company is well-positioned to benefit from the already high pace of subscriber acquisition of the HBO Max (streaming business) and HBO (cable) business. In the first quarter, HBO Max and HBO subscriber count grew by 33.5% year-over-year to 44.2 million in the U.S. and has reached 64 million globally. A $43 billion reduction in net debt will also help reduce AT&T's future interest expenses and bring the company's valuation more in line with other telecommunications players such as Verizon and T-Mobile.

Post spinoff, AT&T expects its revenues and adjusted earnings per share (EPS) to grow year over year by a low single-digit percentage and mid-single-digit percentage, respectively, from 2022 to 2024. After spinning off its entertainment business, AT&T will be a pure-play telecommunications and broadband player set to benefit from structural tailwinds such as the rollout of the 5G wireless network and expanding fiber broadband network. In this backdrop, the spinoff of WarnerMedia can actually prove to be the much-needed catalyst in AT&T's turnaround story.

Apple's second-quarter top-line and bottom-line results (for the quarter ending March 27) crushed Wall Street expectations. The largest public company in the world is firing all cylinders -- be it product sales or service revenue.

In the first half of fiscal 2021, iPhone sales soared by 34% year over year to $113.5 billion, mainly due to the increasing popularity of the iPhone 12, Apple's first 5G smartphone. Although the company currently leads the global 5G smartphone market with a 30.2% share, there's still potential left for future growth in the 5G device upgrade cycle.

Apple has also gained significant traction in its high-margin and mostly recurring services business, which includes Apple Music, the App Store, Apple News+, and Apple TV+. In the first half of fiscal 2021, services' net sales were up 25% year over year to $32.7 billion. With an installed base of over 1.65 billion devices, the company is well-positioned to further increase penetration of its services through its very sticky customer base.

Apple is anticipating a $3 billion to $4 billion revenue hit in the third quarter (ending June 2021), due to ongoing chip shortages. The company is also facing risks associated with antitrust investigations in Europe and the U.S. and a legal battle with Epic Games. Adverse developments in any of these cases can result in fines and the loss of future business for Apple.

However, with total cash plus marketable securities worth $204 billion and total debt of only $12 billion, the company's balance sheet is strong enough to withstand any challenges. Despite the company trading at almost 24 times forward earnings, this tech stock can prove to be an attractive long-term investment for retail investors.

After a lackluster performance in 2020, biopharmaceutical giant AbbVie's stock seems to be back in the game after releasing solid first-quarter results (for the period ending March 31, 2021). The company handily surpassed top-line and bottom-line consensus estimates. The market is especially impressed with the company lifting its fiscal 2021 adjusted earnings per share (EPS) guidance to $12.37 to $12.57, a bump from its previous profitability guidance of $12.32 to $12.52.

With Humira accounting for 37.7% of AbbVie's first-quarter net sales, investors are justifiably concerned about the drug losing its U.S. patent protection in 2023. While even the company is anticipating 2023 to be a tough year in terms of overall sales, it expects revenues to start recovering as soon as 2024.

AbbVie has been preparing for this big patent cliff for many years by gradually reducing its reliance on the Humira franchise. To replace a major chunk of Humira's lost sales post-patent expiry, the company has already launched two superior immunology drugs, Skyrizi and Rinvoq. AbbVie has also built a strong oncology franchise comprising of blockbuster cancer drugs Imbruvica and Venclexta, which together delivered $1.7 billion in sales in the first quarter. Finally, AbbVie's recent acquisition of Allergan has added a leading aesthetics portfolio comprising of strong brands such as Botox Cosmetics and Juvederm.

AbbVie's current dividend yield is 4.5%, while its trailing-12-month (TTM) dividend payout ratio has been just over 58%. With total cash of $9.8 billion on its balance sheet and TTM free cash flow of $17.8 billion, this S&P Dividend Aristocrat (first as a part of Abbott Laboratories and then as an independent company post spinoff in 2008) seems capable of paying dividends for the foreseeable future.