Please ensure Javascript is enabled for purposes of website accessibility
Log In Help Join The Motley Fool
Free Article Join Over 1 Million Premium Members And Get More In-Depth Stock Guidance and Research
By David Jagielski - May 26, 2021 at 6:27AM

They all report earnings in the coming days, and with high valuations, it won't be easy to impress investors.

Although earnings season is about finished, three large companies report their earnings this week, which could dictate where the market takes them. Veeva Systems (VEEV 1.59%), salesforce.com (CRM 0.62%), and Costco (COST 1.59%) are among the stocks to watch. Investors will be looking for them to continue posting strong sales numbers.

All of these companies have done well amid the pandemic, but with comparable numbers from 2020 making it tougher to outperform this year, will they continue to be strong buys? Below, I'll look at how these companies have been performing recently, what to watch for when they release their latest numbers, and whether they look like good investments to be holding right now. 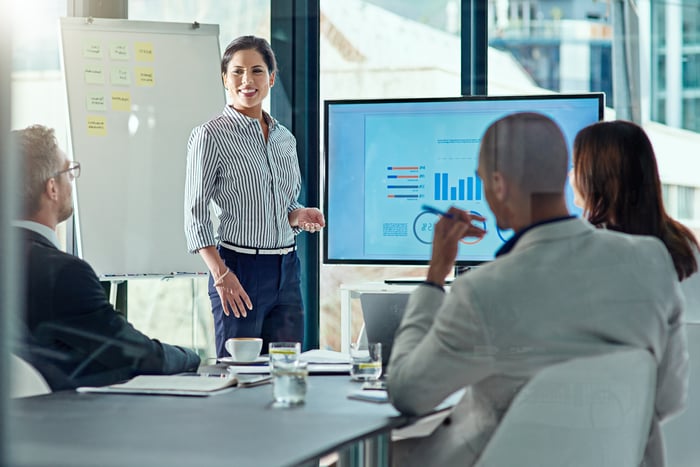 Veeva has had a relatively tame performance over the past year, with its share price rising 29% and underperforming the S&P 500, which has risen by 44%. Growth stocks have come under pressure over the past few months, and that is going to make it difficult for the cloud-computing stock to rally on anything but an amazing report when it releases first-quarter earnings on May 27 (for the period ending April 30).

When Veeva last reported its earnings on March 2, which were for its year end (ending Jan. 31), the cloud-based software company reported revenue of $1.5 billion, which was up 33% year over year. That's a better growth rate than the previous year, when sales rose by 28%.

As healthcare companies move to digitize their businesses amid the pandemic, there's an opportunity for Veeva to tap into that potential growth. Veeva's key products are its Commercial Cloud, which includes customer relationship management (CRM) software, and Veeva Vault, which helps companies manage their data online. While both could continue to be in high demand, investors will certainly want to watch to see if Veeva's heightened growth rate will last much longer. Whether that's the case could offer a hint as to whether the "aggressive" investments Veeva said it was previously making, "for the sizable market opportunity we see across all our major product areas," are paying off.

Although Veeva generates strong net margins that typically come in at 25% or better, the stock still trades at a hefty price-to-earnings (P/E) multiple of 111. The average stock in the Health Care Select Sector SPDR Fund trades at a P/E of just 27.

Investors will want to see if the company's growth rate and profits improve. But even if they do, that still might not provide enough of a reason to invest in Veeva right now given the pricey level it's trading at today.

Salesforce offers similar services to Veeva but isn't focused primarily on healthcare. Although its P/E of 51 isn't nearly as high as Veeva's, that's still a large premium and well above the Technology Select Sector SPDR Fund's average earnings multiple of 34. Its shares have performed similarly to Veeva's, generating returns of about 20% in the last 12 months.

However, the company's rapid growth has been slowing down in recent years. It released its fiscal 2021 numbers on Feb. 25 for the period ending Jan. 31, and its sales of $21.3 billion grew by 24% from the previous year. In fiscal 2020 and 2019, the growth rate was 29% and 27%, respectively. Unlike Veeva, Salesforce's margins aren't nearly as strong. Its operating margin is usually no more than 4% of revenue due to its high sales, general, and administrative expenses, which take up more than half of its revenue. For this coming fiscal year, Salesforce projects its revenue will have a similar growth rate, with sales topping around $25.7 billion. That estimate includes the assumption that its purchase of Slack Technologies completes in the second quarter.

In addition to reports on Salesforce's growth, investors will want to look for an update on the Slack acquisition and whether it will close on time. Bringing the group messaging and collaboration company into the fold will boost Salesforce's offerings and unlock more growth opportunities down the road.

But Salesforce remains in a tough spot. If its growth number starts to taper off more, its shares could be poised for a sell-off. Unless it can surprise investors with a growth rate over 25% to suggest it is tapping into more opportunities, the stock could be in for some tough times ahead.

Costco's shares trade at a P/E of around 40. And while that is the lowest on this list, it's incredibly high for its business. Investors are paying just 33 times the profits of rival Walmart. The good news is that last week, Walmart beat expectations going up against a period last year that was boosted by panic-buying during the early stages of the pandemic. That bodes well for Costco, and suggests that the retailer may also deliver a positive surprise for investors when it posts its results this Friday.

On May 5, the company reported its April sales numbers and continued to see some solid year-over-year growth, with e-commerce sales up 21% and comparable company sales rising by 33%. Although consumers may no longer be stocking up on toilet paper, shopping habits changed during the pandemic, and Costco is still seeing strong e-commerce growth.

Its most recent results came out on March 4 for the period ending Feb. 14. Sales during that quarter grew by 13% over a 12-week period and 14% when looking at 24 weeks. E-commerce sales numbers were up 76% for the three-month period and 80% on a year-to-date basis.

Investors will want to watch for both growth numbers, particularly to see if e-commerce remains strong or is showing signs of slowing. But with Costco getting a boost from the pandemic and consumers having fewer places to shop in 2020, it wouldn't be surprising if sometime this year Costco's sales began to lag. Its shares have risen 27% over the past year, but it may be difficult for the retailer to continue building on that success. Investors have become warier of buying stocks that have benefited as a result of pandemic-driven trends that may not last over the long term.

While Costco's business has proven solid, investors should be careful not to expect a whole lot more growth from the company. Its top line may soon run out of room to rise.

David Jagielski has no position in any of the stocks mentioned. The Motley Fool owns shares of and recommends Costco Wholesale, Salesforce.com, Slack Technologies, and Veeva Systems. The Motley Fool has a disclosure policy.