Please ensure Javascript is enabled for purposes of website accessibility
Log In Help Join The Motley Fool
Free Article Join Over 1 Million Premium Members And Get More In-Depth Stock Guidance and Research
By Matthew DiLallo - May 29, 2021 at 10:39AM

These companies offer high yields thanks in part to their bottom-of-the-barrel valuations.

When stock prices rise, dividend yields fall. Because of that inverse relationship, the rally in the S&P 500 over the past year has pushed the yield on the average stock in that index down to about 1.4%.

However, while most stocks have rallied in the last year, some haven't quite caught up; they still trade at rock-bottom prices. On a more positive note, they offer higher-than-average dividend yields. Three incredibly cheap income producers that stand out are energy master limited partnerships (MLPs) Crestwood Equity Partners (CEQP -0.56%), EnLink Midstream (ENLC -2.87%), and Energy Transfer (ET -1.01%). 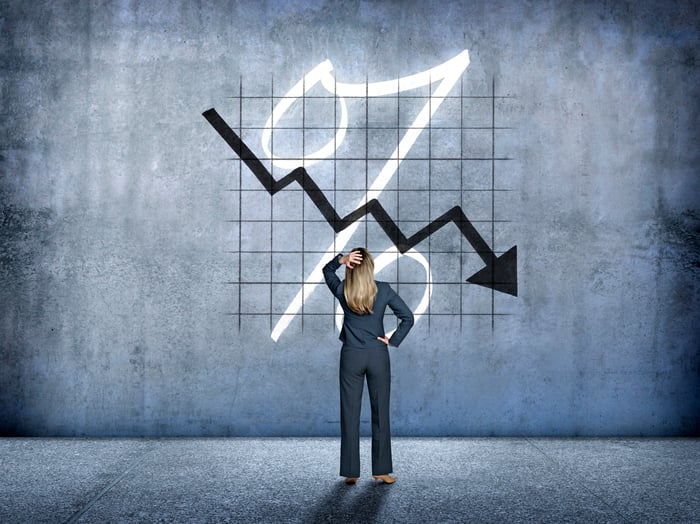 Dirt cheap no matter how you slice it

Thanks to improving commodity prices, Crestwood Equity Partners expects to generate $575 million to $625 million of adjusted EBITDA this year, along with $335 million to $385 million of distributable cash flow. That forecast suggests the MLP is ridiculously cheap.

For example, Crestwood currently has an enterprise value (EV) of $5.58 billion. Thus, this forecast implies it trades at an EV-to-EBITDA ratio of between 8.9 and 9.7, which is very inexpensive considering that midstream assets typically sell at a mid-teens multiple of their EBITDA. Meanwhile, Crestwood is even cheaper when looking at its price-to-cash-flow ratio. At its current market cap of $1.9 billion, Crestwood trades at 4.9 to 5.7 times cash flow.

Because it's so cheap, Crestwood has a high dividend yield that's currently around 8.4%. While a payout that high is usually a sign of trouble, that's not the case with Crestwood. The company is on track to generate enough cash to cover its payout with about $130 million to $180 million to spare. Meanwhile, it only expects to invest $35 million to $45 million on expansion projects this year, leaving it with plenty of excess cash. It intends to use that money to shore up its already solid balance sheet and repurchase some of its beaten-down equity.

A gusher of cash

EnLink Midstream expects to generate $940 million to $1 billion of adjusted EBITDA this year. With a current enterprise value of around $8.5 billion, EnLink trades at an EV/EBITDA of 8.5 to 9.0.

Thanks to that low valuation, EnLink also offers a dividend that's currently yielding 7.8%. That lucrative income stream is also on rock-solid ground, because the company expects to produce between $275 million and $325 million of free cash flow after paying its dividend this year. That's more than enough money to cover its capital spending program of $140 million to $180 million.

Thus, EnLink will be able to pay off some debt to maintain its solid financial profile and take advantage of acquisition opportunities. It recently agreed to purchase a gathering and processing system for an upfront cost of $50 million, and up to $25 million in additional future payments.

Dirt cheap, and getting cheaper

Energy Transfer expects to produce between $12.9 billion and $13.3 billion of adjusted EBITDA this year. With a current enterprise value of around $87.4 billion, the MLP trades at an EV/EBITDA of 6.6 to 6.8.

Meanwhile, the company is in the process of acquiring rival MLP Enable Midstream Partners (ENBL) in a $7.2 billion deal. Enable will add about $1 billion of annual EBITDA to Energy Transfer's tally, while the combination should save the company roughly $100 million per year. That implies a purchase price of around 6.55 times EBITDA, making the company seem even cheaper on a combined basis.

Because it's so cheap, Energy Transfer pays a dividend that's currently yielding around 6.1%. It covers that payment with ample room to spare. In the first quarter alone, the company generated $3.5 billion in excess cash flow after paying its distribution. As it only expects to invest $1.6 billion in capital projects for the year, Energy Transfer is producing a gusher of excess cash that it's using to repay debt.

High yields thanks to bottom-of-the-barrel valuations

MLPs have fallen out of favor among investors in recent years. That means these companies are trading at ridiculously low prices, which has pushed up their dividend yields. For investors looking for low-cost income streams, that makes them intriguing options.