Please ensure Javascript is enabled for purposes of website accessibility
Log In Help Join The Motley Fool
Free Article Join Over 1 Million Premium Members And Get More In-Depth Stock Guidance and Research
By Danny Vena - May 29, 2021 at 7:30AM

If you're an investor with the right temperament and a sufficient investing horizon, these stocks could change your life.

Every investor dreams of catching that one life-changing stock, buying it early in its life cycle, hanging on for dear life, and riding it to untold riches. While this sounds simple in theory, the reality is much more complex and difficult to achieve. The most difficult part of the equation is the human element: Many investors have had their hands on a game-changing stock at one point or another, only to lose faith or be scared out by the gut-churning volatility that is the cost of admission when it comes to life-changing investments.

Some of the most successful stocks over the past quarter century -- think Netflix, Apple, and Amazon, just to name a few -- have each lost more than half their value at some point while producing these mind-boggling gains. There's no question these were life-changing investments, returning roughly 42,000%, 29,000%, and 17,000%, respectively, for investors who bought early and held on for the past 25 years.

The recent volatility that hammered many tech stocks highlights the nerves of steel required to stay the course, but the massive potential remains. Putting some of your disposable cash to work in the next generation of high-growth stocks could result in explosive gains and the potential to upgrade your lifestyle. 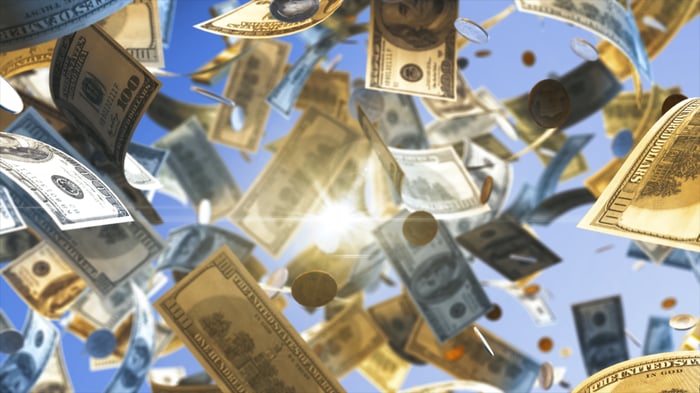 While U.S. investors may not be familiar with Sea Limited (SE -3.44%), you'd be hard-pressed to find someone in its native Southeast Asia that doesn't know its name. The company began as a mobile game developer, but strategically expanded its offerings and now hosts a full-fledged digital empire that includes mobile gaming, online retail, digital payments, esports, and more.

Garena, the company's mobile game developer and publisher, has a global hit on its hands with Free Fire. The popular game has expanded beyond Sea Limited's core market and is now available in 130 countries worldwide, with large and growing user bases in Latin America, India, North America, Russia, and the Middle East.

Its digital sales site Shopee is the largest e-commerce platform (in terms of gross merchandise volume) in the region, which includes Indonesia, Taiwan, Vietnam, Thailand, the Philippines, Malaysia, and Singapore. The company also recently expanded its online retail operations to Latin America.

Sea Limited's first-quarter results tell the tale. Total revenue grew 147% year-over-year, with robust contributions from each of its three core business. Digital entertainment grew by 111% year-over-year, e-commerce climbed 250%, and total payment volume from digital financial services more than tripled. It's important to note that the company is far from profitable, though its adjusted EBITDA (earnings before interest, depreciation, and amortization) has moved into the plus column.

Sea Limited sits at the intersection of several large and growing secular trends -- gaming, e-commerce, and digital payments -- and is well positioned to continue its pattern of explosive growth. 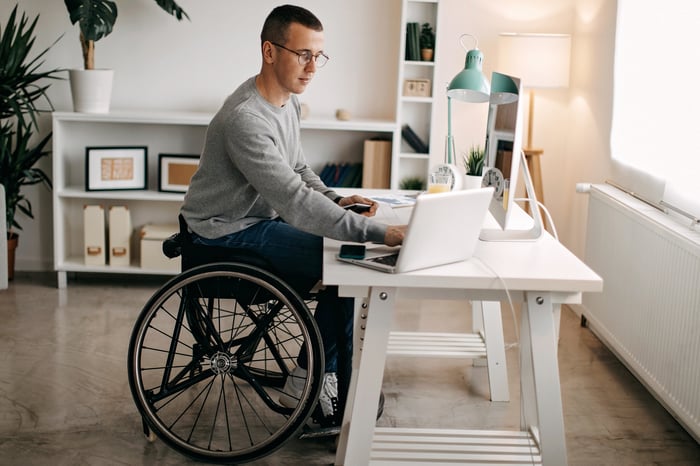 The workforce is in the midst of a dynamic shift, and the statistics regarding freelancers are nothing less than staggering. Roughly 36% of the total U.S. workforce, or 59 million Americans, are currently freelancing. The numbers are even higher among younger workers, with 44% of millennials and 50% of Gen Z freelancing. That represents a large and growing opportunity for the companies that unite freelance workers with potential clients. That's where Fiverr International (FVRR 1.87%) comes in.

The company is one of the world's largest digital repositories of skilled laborers, providing a cloud-based platform that powers the gig economy. It operates as a marketplace that connects skilled freelancers with businesses looking to pay for their services. The freelancers (sellers) use the platform to list their services (called "gigs") in one of more than 300 categories for buyers looking to hire them.

Fiverr acts as the go-between and maintains control of the funds to ensure both parties are satisfied with the arrangement, and charges a small fee for each transaction. The company also provides a host of tools to simplify the process, including invoicing, payment processing, and even analytics that help facilitate these deals.

Its position as a toll collector is a lucrative one. In the first quarter, Fiverr's revenue was among the highest in its history, growing 100% year-over-year. The company is still losing money, but its adjusted EBITDA losses improved by more than 75%. Its customer metrics were equally compelling. Active buyers increased 56% to 3.8 million, while the average spending per buyer climbed 22%.

Management estimates Fiverr's addressable market at roughly $115 billion. Considering the company generated revenue of roughly $190 million in 2020, it has a long runway of potentially explosive growth ahead. 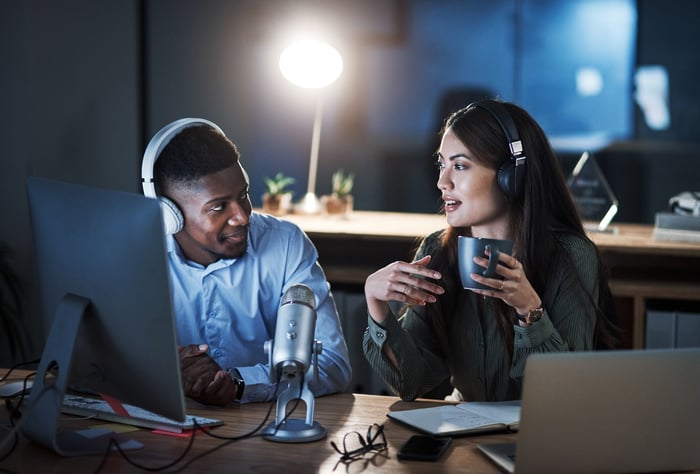 The next generation of digital advertising

Gone are the days when advertising agreements were consummated in smoke-filled offices. The Trade Desk uses high-speed computers equipped with artificial intelligence (AI) and sophisticated algorithms that automate much of the ad-buying process, while also ensuring that the ads reach their target markets.

The company's proprietary cloud-based platform helps marketers place ads across the digital realm, reaching social media, podcasts, mobile video, websites, apps, and even connected TV. The Trade Desk also provides tools that help advertisers measure the success of their ads, ensuring they achieve reasonable returns on their investments. Its proprietary platform can evaluate 12 million ad impressions and quadrillions of permutations each second, ensuring its ads are shown to the right audiences. This combination of unrivaled transparency and cutting-edge tools have made The Trade Desk a favored partner with the world's largest advertising agencies.

Its financial results illustrate the success of this strategy. Revenue growth accelerated to 37% in the first quarter, up from 33% in the prior-year period. The Trade Desk's revenue is growing faster than the overall industry's, a sign that the company continues to steal market share from the competition. At the same time, its adjusted net income jumped 61%. As a result, The Trade Desk thrashed analysts' consensus estimates on both the top and bottom lines.

The advertising industry is in the midst of a paradigm shift, and The Trade Desk -- with its state-of-the-art ad-buying platform -- is well-positioned to thrive long into the future. 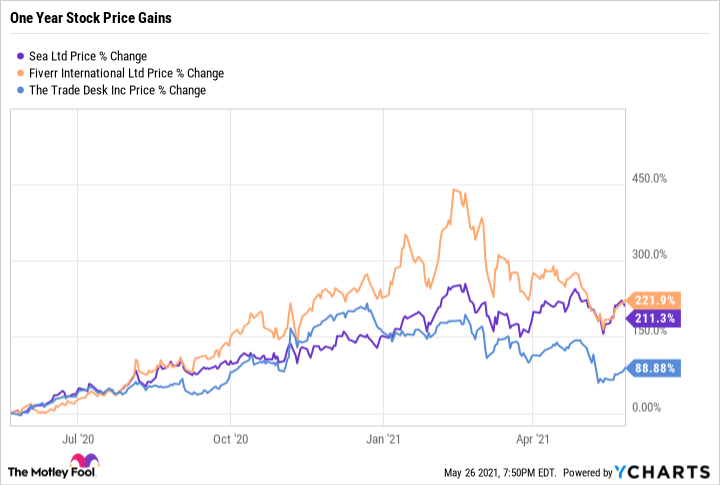 Part of the cost of admission when it comes to high-growth stocks is the seeming disconnect with their valuations. Like many of their high-flying peers, these companies don't come cheap. The Trade Desk, Fiverr, and Sea Limited are selling for 32, 30, and 23 times sales, respectively, when an attractive price-to-sales ratio typically falls between one and two.

In each case, however, investors have thus far been willing to pay up for the impressive top-line growth and the explosive potential gains that could result in the months and years to come.