Please ensure Javascript is enabled for purposes of website accessibility
Log In Help Join The Motley Fool
Free Article Join Over 1 Million Premium Members And Get More In-Depth Stock Guidance and Research
By Jeff Little - May 29, 2021 at 6:25AM

It's improving the customer experience by putting education and purchasing at people's fingertips.

Cannabis companies have recently become increasingly active through mergers and acquisitions and in using technology and innovation in an effort to become vertically integrated players with self-contained supply chains. Colorado-based Charlotte's Web Holdings (CWBHF 5.37%) -- specializing in hemp-based cannabidiol (CBD) products including extracts, oils, and gummies -- recently made moves of its own to improve the customer experience and ensure its self-sufficient presence in a post-pandemic world, where pot is legal in an increasing number of places. 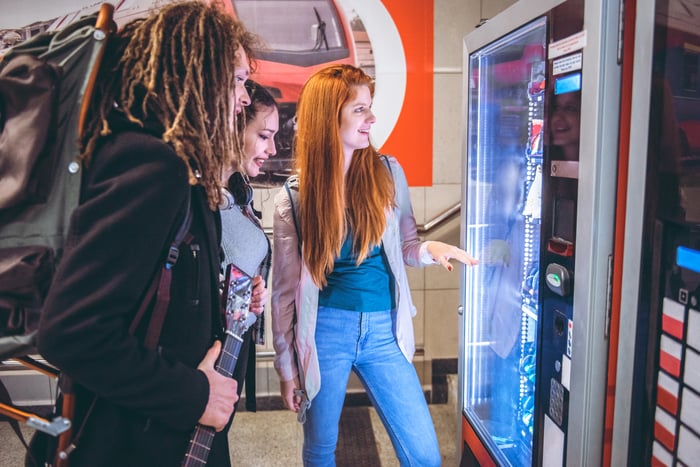 As consumers return to retail stores, they might find that Charlotte's Web is now offering more than 30 of its products in first-to-market self-serve TRUYU kiosks, developed by Limelight Automated Retail. The kiosks have automated elevator retrieval system that protects products and is accompanied by a 50-inch interactive video screen through which users can explore educational content. Its basic hemp CBD lessons are aimed at engaging buyers, retail employees, and managers, with special rewards and certificates of completion provided to those who complete end-of-module quizzes.

If Charlotte's Web has its way, those kiosks will help build on a 9% year-over-year increase in consolidated revenue the company experienced during its most recent quarterly results, driven by 14.5% higher direct-to-consumer sales. If foot traffic is there, it should be fairly easy to get people engaged through interactive and educational devices on a 50-inch video screen. But the question remains, with pre-COVID normalcy approaching, when consumers return to stores, how often will they do so?

Charlotte's Web isn't just crossing its fingers for a return to retail stores in the U.S. The company is making moves to expand internationally, now into Israel, with initial product sales there planned for 2022. The Israel connection will provide Charlotte's Web a distribution agreement with InterCure Ltd. (IRCL.F 1.15%), owner of Canndoc -- a pioneer in pharmaceutical grade cannabis and a medical cannabis producer -- making Charlotte's Web products available to the 40,000 patients Canndoc has provided for and the rest of the Israeli public.

Charlotte's Web may need this additional international exposure in order to impress investors. Coming off of its most recent quarterly report, the company is on a not-so-favorable streak with eight of the last nine quarters missing earnings estimates.

Controlling expenses is another way the company can get to being profitable. During the fourth quarter of 2020, it implemented a strategy to reduce production costs and expenses. Although expenses rose year over year by 2.9%, the company was able to reduce expenses by 15% compared to the third quarter. It also hopes that continued efforts to reduce production costs will help contribute to profit by offsetting an increased portion of revenue being attributed to the lower margin product line of gummies.

It's going to take some time, and a big vote

Looking forward, Charlotte's Web needs a lot of plans to come to fruition. It could also use the help of lawmakers as federal legalization of recreational-use cannabis in the U.S. is further debated. In preparing for that hopeful day in the company's future, it recently announced that it secured the option to purchase cannabis wellness incubator, Stanley Brothers USA, in a five-year $8-million purchase agreement option. Stanley Brothers founded Charlotte's Web, and currently operates in highly visible cannabis states, including Colorado, California, and Florida, with expansion plans for eight more states. This would give hemp-focused Charlotte's Web immediate exposure to the U.S. cannabis wellness market upon recreational-use legalization.

Time will tell if new interactive kiosks will play a hand in driving foot traffic and growing revenue. If the company can keep its leading market share in CBD wellness products and optimize international expansion in tandem with its strategy to reduce production costs, long term investors with a higher risk threshold might benefit by purchasing a heaping amount of the stock now. But for those waiting to see whether or not federal legalization takes place, it might be a good idea to buy a portion of shares now and a portion later, when there is less uncertainty around that debate.

The current stock price is hovering at $4, with a one-year target of $5, having stabilized a bit since the start of the year. But one doesn't have to look back too far, during the hype of recreational-use cannabis legalization in Canada, and the initial public offering of Charlotte's Web, to realize that it has the power to be in the $20 range when supported by the right news, and with the balance sheet to back it up. In the meantime, Charlotte's Web will need to make good on its attempts to curb expenses and production costs in order to generate some much needed profit growth.