Please ensure Javascript is enabled for purposes of website accessibility
Log In Help Join The Motley Fool
Free Article Join Over 1 Million Premium Members And Get More In-Depth Stock Guidance and Research
By Mike Price - May 30, 2021 at 6:01AM

The management teams for these three banks think their stock is a buy.

In 2020, big banks were preparing for pandemic-related disaster. Expecting a wave of loan defaults, they fortified by setting aside huge amounts of loan-loss reserves. After the Federal Reserve released the results of its annual stress test that June, it acted to ensure capital stability by banning large banks from buying back stock and limiting their dividend payouts. But by December, after an unprecedented second round of stress tests, the Fed announced that it would allow banks to repurchase shares again -- and a few of them announced that they would do so.

Share buybacks are a tax-efficient way for companies to return capital to their shareholders. Repurchased shares are retired, which increases each investor's claim on earnings. Over time, buybacks increase earnings per share, which should result in a higher stock price. Unlike dividends, which are taxed immediately and possibly at your income tax rate, tax on stock appreciation doesn't have to be paid until you choose to sell.

But there's a catch -- this only benefits investors if the stock is actually a good buy. Let's look at three banks that are working through stock repurchase programs right now -- JPMorgan Chase (JPM -1.22%), Wells Fargo (WFC -1.30%), and Ally Financial (ALLY 2.73%) -- and see if we should join along with them. 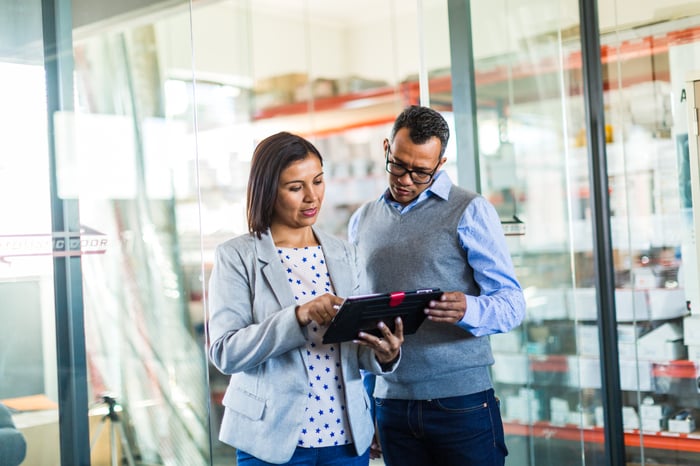 JPMorgan Chase was the first bank out of the blocks, announcing on the same day as the Fed that it would be resuming stock buybacks in 2021. It has followed through with that announcement. Through the end of Q1, the company bought back $4.3 billion in shares  and has the capacity to buy back another $7.4 billion in Q2. But are these buybacks a good use of capital?

Stock buybacks are only accretive to shareholders if they're done when the stock is undervalued. If the company buys back overvalued stock, it is deploying capital to a low future expected return. There are likely better avenues for the capital to be used -- say, expansion, or to pay a dividend.

JPMorgan appears undervalued by at least two metrics: Its price-to-earnings (P/E) ratio of 13 and price-to-book-value (P/B) ratio of 2 are both well under industry averages. Additionally, a tier 1 capital ratio over 13% means the company has plenty of capital available to distribute to shareholders.

It's hard for the too-big-to-fail banks to really wow the market with their quarterly earnings because they're just so huge. But JPMorgan did just that in Q1, beating Wall Street estimates by over 45% thanks to massive growth in investment banking fees and a loan-loss reserve release. Be careful relying on those numbers, however -- loan loss reserve releases don't happen often, and the investment banking fee increase was helped by the likely unsustainable boom in special-purpose acquisition companies (SPACs). The total net benefit of the reserve release was $4.2 billion; the company still has total reserves of $26 billion. And the investment bank's equity underwriting spiked by $1.1 billion, or 67%, last year.

Wells Fargo also quickly announced its intent to buy back shares after the Fed's announcement last year, but its situation is a little more complicated.

The bank was punished for its phony accounts scandal with a $1.95 trillion asset cap in 2018. That means the bank is not allowed to accumulate more assets than the cap, restricting its growth. Many expect this cap to be lifted in 2021, and that should lead to more cash flow that can be distributed to shareholders.

The Wells Fargo board of directors increased the total authorized buyback amount to 667 million shares in December last year. Through the first quarter, Wells had repurchased just 17.2 million shares, which amounted to just under $600 million.

Shares have been on a hot streak year to date (up roughly 55%) and it's possible that management is waiting for the price to cool off to complete the full program. That said, Wells Fargo's P/B of just under 1.2 is extremely low, and the eventual lifting of the asset cap is likely to push the price even higher.

Ally committed to a $1.6 billion share repurchase program at the beginning of 2021, and through the first quarter has repurchased $219 million worth of shares. Management said in the Q1 earnings presentation that it is on track to complete the full $1.6 billion by the end of the year.

Ally is the sole internet-only bank of the bunch. It grew one of the nation's largest auto lenders online and is putting that expertise to use in a post-COVID world to expand more into personal loans and home mortgages. Mortgage originations were up 145% year over year in Q1 and gross lending originations were up 179.

Like JPMorgan Chase and Wells Fargo, Ally looks undervalued at the moment. My Foolish colleague Anthony Di Pizio sees significant upside over the next few years. This makes its stock a great investment, and continued repurchases should help close the gap between the current stock price and the bank's intrinsic value.

Each of the three banks we've looked at are undervalued or fairly valued, and each is focusing on returning capital via buybacks. As long as the stocks stay undervalued, shareholders should cheer on the buyback plans.