Please ensure Javascript is enabled for purposes of website accessibility
Log In Help Join The Motley Fool
Free Article Join Over 1 Million Premium Members And Get More In-Depth Stock Guidance and Research
By John Rosevear - Jun 1, 2021 at 11:15AM

It was the best-selling car of any kind in the EV-loving Nordic nation.

Ford Motor Company's (F 2.02%) Mustang Mach-E was the best-selling vehicle of any kind in Norway in May, the first full month of sales for the electric Ford in the country that buys more electric vehicles (EVs) per capita than any other.

Norway is a small market for vehicles by global standards, but the country has become a bellwether for EV sales because of a policy that exempts fully electric vehicles from the stiff taxes imposed on those with internal-combustion engines.

Battery-electric vehicles made up just over 60% of all new cars sold in Norway in May, up from 43% a year ago, according to new figures from the Norwegian Road Federation. The Mustang Mach-E was the leader with 1,384 sold, for a roughly 10% share of the overall market. 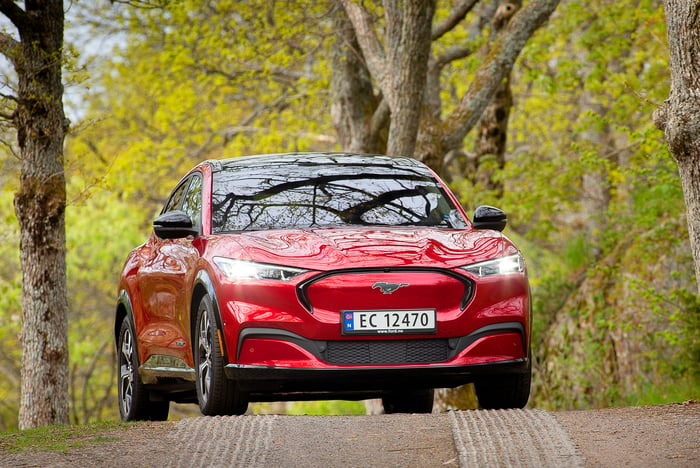 Ford's electric Mustang Mach-E was the best-selling vehicle in Norway in May. The Tesla Model 3 was sixth. Image source: Ford Motor Company.

"Although this is obviously big for us, our realistic goal is that it should also be clearly visible on the statistics for several months to come," said Ford Norway CEO Per Gunnar Berg in a statement.

"We have received several ships with cars to Norway in the last month and expect [steady supplies] to continue in the coming months," Berg said, emphasizing that while there is "great interest" in the Mach-E in other European countries, Ford is prioritizing deliveries to Norway for now.