Please ensure Javascript is enabled for purposes of website accessibility
Log In Help Join The Motley Fool
Free Article Join Over 1 Million Premium Members And Get More In-Depth Stock Guidance and Research
By John Rosevear - Jun 3, 2021 at 11:03AM

Tight supplies of F-Series trucks hurt, but the Mustang Mach-E continued to shine.

Ford Motor Company (F 0.86%) said today that its U.S. sales rose 4.1% in May from a year ago, despite exceptionally tight inventories caused by a global shortage of crucial computer chips.

The global chip shortage, a result of a surge in demand for computers and consumer electronics during the pandemic, has limited Ford's ability to fill surging orders for key products including its huge-selling F-Series pickups.

But with supplies of new vehicles tight across the industry, Ford has been able to sell its most-profitable products at strong prices, without significant incentives.

New technology has helped draw buyers to showrooms. Ford said that "electrified vehicles," meaning hybrids as well as the battery-electric Mustang Mach-E, have been a bright spot. The company sold over 2,800 examples of its new hybrid F-150 PowerBoost pickup in May, while sales of hybrid versions of the Escape and Explorer SUVs were more than double year-ago levels. 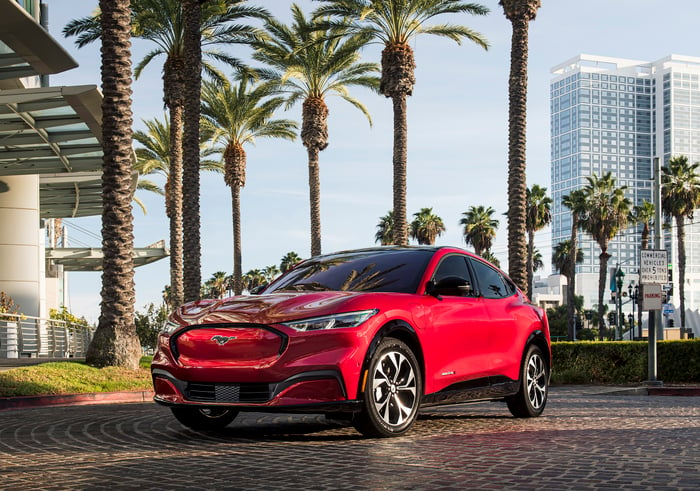 Ford delivered 1,945 Mustang Mach-Es in the U.S. in May as it ramped up exports to other markets including Norway, where the sporty electric crossover was the country's best-selling vehicle last month. Year to date through May, Ford has manufactured 27,816 units of the Mustang Mach-E, with 10,510 of those going to U.S. customers.