Please ensure Javascript is enabled for purposes of website accessibility
Log In Help Join The Motley Fool
Free Article Join Over 1 Million Premium Members And Get More In-Depth Stock Guidance and Research
By Ryan Downie - Jun 3, 2021 at 7:05AM

Take these three stock market lessons from May as you build an investment portfolio.

Corporate earnings and macroeconomic speculation made May another very interesting month in the stock market. The reopening trade and growth vs. value were major themes as the economy continues to recover from the pandemic. Make sure you retain a long-term view as you build an investment portfolio. Looking at some of the under-the-radar stories from last month will keep you from being blindsided by major forces moving markets over the rest of the year.

The first quarter was one of the greatest all-time quarters for corporate earnings. Earnings per share grew 52%, the fastest rate since 2010. Sales increased 10.7%, which itself is the fastest since 2011.

These results were obviously impacted by the start of the pandemic in much of the world in Q1 last year, but it was still well ahead of expectations. According to data by FactSet, 86% of S&P 500 companies beat earnings estimates and 76% topped sales estimates. This data has been tracked since 2008, and the quarter marked the highest percentage of surprises to the upside. This wasn't a case of narrow outperformance, either. The vast majority of S&P 500 stocks were smashing estimates, with an average discrepancy above 20%.

It's hard to overstate just how bullish earnings season was for corporate fundamentals. In that sector, it seems that the recovery is well under way. This will further fuel concerns over inflation, and strengthen the arguments of people calling for the Fed to raise rates ahead of schedule. 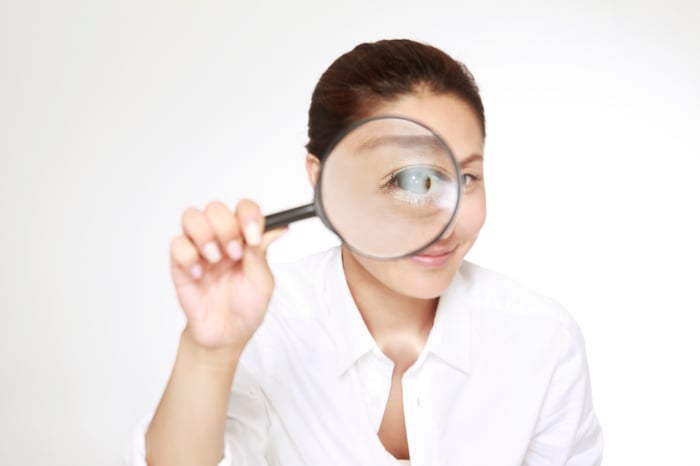 2. The VIX spiked, but it's still trending downward

The market is digesting a lot right now, and it's leading to some volatility. Interest rates are low, but the Fed might be forced to raise rates earlier than expected with signs that high inflation is hitting consumer prices. Many businesses are booming and recovering, yet many people remain unemployed. Last year, tech stocks led major indexes higher, soaring to historically high valuations. With more normalized times ahead, investors are becoming more interested in value stocks.

All of these factors were in play, and we saw the S&P Volatility Index, or VIX, spike above 27 in May. The volatility index was around 19 to start the month, while the long-term average usually falls in the low 20s. That volatility spike might have some people on their toes, but we are still seeing a downward trend from the extremely high levels during the market crash in the first quarter of 2020. 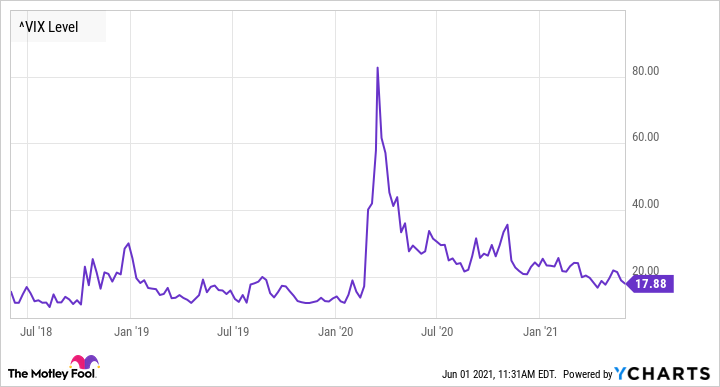 It's also important to understand the consequences of volatility, in case this pattern continues over the next few months. There is rotation occurring in the market, as investors move capital away from the growth stocks that performed so well in 2020. Value stocks and small-cap stocks fared somewhat better in May than large-cap growth stocks. The catalysts behind these moves aren't going away, so be prepared for a continuation of the dynamics we saw in May. 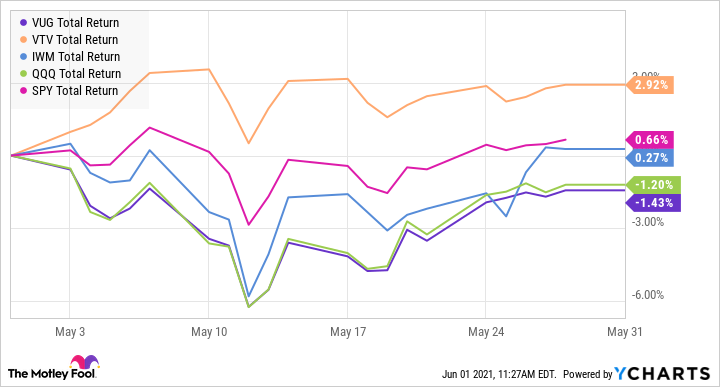 There's a lot of talk about the reopening trade, but that's really the first step of what should be a long-term normalization. Valuations are still above historical averages, while interest rates are still near historical lows. The stock market will need to experience periodic volatility as allocations shift away from the relatively extreme positions of the past year. Different market sectors and asset classes will have periods of outperformance while this is sorted out, and some might even take turns. Make sure that your portfolio is set up to deliver long-term returns, and don't react emotionally to market news as the bumpy ride continues.

May's employment report wasn't as rosy as corporate earnings. The economy added 266,000 jobs in April, but analysts were hoping for 1 million. That's a massive shortfall, but stock indexes still leaped upward immediately. The NASDAQ did particularly well in the immediate aftermath, indicating that large-cap tech stocks were apparent beneficiaries of weak employment.

The "bad news is good news" situation has been simmering beneath the surface for months, but we are seeing blatant signs now. This was a common theme in the years following the Great Financial Crisis. Investors were worried that stock valuations could only be supported by accommodative monetary policy, but not by corporate fundamentals. If economic news is too good, then the Fed will raise rates, triggering what economists call a "taper tantrum" where the stock market drops.

Conditions aren't quite as extreme today as they were in the aftermath of the Global Financial Crisis, but we're entering similar territory. The market will struggle when interest rates eventually rise, and the high-valuation growth stocks are likely to perform even worse. The longer the Fed stays the current course, the longer these stocks have room to run. Don't get caught holding the bag, but don't sell out of growth completely just because it might be tough in the short term.