Please ensure Javascript is enabled for purposes of website accessibility
Log In Help Join The Motley Fool
Free Article Join Over 1 Million Premium Members And Get More In-Depth Stock Guidance and Research
By Travis Hoium - Jun 4, 2021 at 7:15AM

This is the leader in AR today and could be taking a big step forward with a new pair of glasses.

Virtual reality and augmented reality (VR/AR) have been emerging and growing technologies for years, but they've never really hit their breakout moment. That could be changing as a combination of computing power, tracking technology, and visual hardware make devices more accessible.

Names like HTC, Apple, and Facebook are often mentioned as the leaders in VR and AR, but they don't dominate the market. In AR specifically, Snap (SNAP 3.24%) is emerging as a leader to watch, and you may already be using its industry-leading technology. 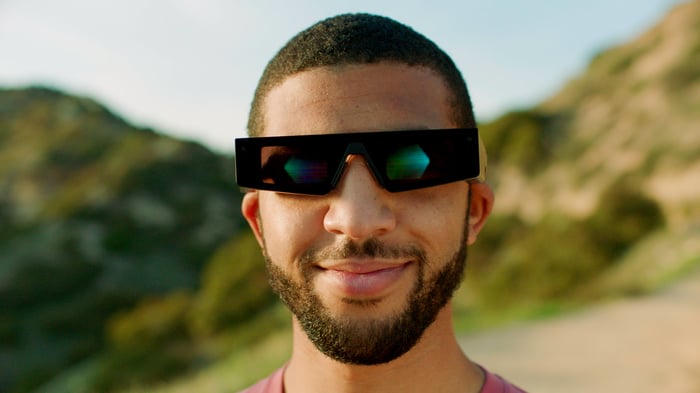 Snap is building the future of AR

The start of augmented reality for Snap was face filters. This technology was fun for sending Snapchats to friends, but the underlying technology was critically important for the next generation of AR content.

Today, AR isn't just about faces -- it's about the studio platform Snap has built for developers and leveraging the hardware improvements on devices like the iPhone. Now with lidar, iPhones have incredibly accurate spatial tracking, making it much easier to place digital objects in AR.

The next step will be bringing this AR technology into Snap's Spectacles. The Spectacles glasses Snap makes have been used primarily for capturing video, but now that video can feed an augmented reality experience into the lenses. Spectacles 4 are only in the hands of developers today, but we're seeing the vision Snap has in AR come to life. Here was founder Evan Spiegel's introductory video.

Tapping the vast potential of @Snap's AR platform, the next generation of Spectacles allow you to overlay Lenses directly onto the world in front of you, for an immersive AR experience. #SnapPartnerSummithttps://t.co/r4XnSC886z pic.twitter.com/UTDDoxwBOO

As Spectacles improve, it'll open up a world of possibilities for Snap. The company could become a hardware company with AR glasses, but the real value will be in building the software platform developers use to build AR experiences and send them to users. The combination of AR content and Snap's social network could be a highly valuable combination for advertisers looking to engage consumers in new ways.

Snap goes on a buying spree

To build out its AR capabilities, Snap is quickly acquiring start-ups that could help build technology as well as use cases for AR.

Snap seems to be buying up the technology it needs to build a full AR ecosystem from development tools to hardware. And that's why Snap could end up being the leader in augmented reality technology long term.

Snap's revenue has grown nearly 600% over the last five years as the company has learned to monetize users more effectively and has steadily grown its audience. Advances in AR could boost the company's revenue if Spectacles are adopted more widely and advertisers learn how to utilize the technology.

You can see below that Snap's stock isn't cheap at 32.6 times sales, but given the growth rate and lead in AR, it's a technology stock I'm still betting on. 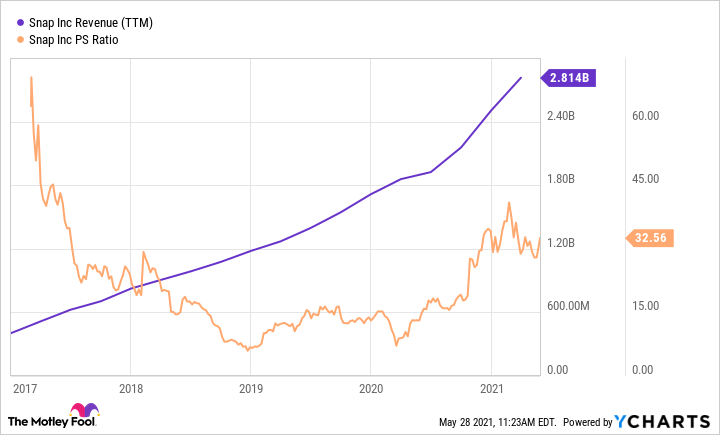