Please ensure Javascript is enabled for purposes of website accessibility
Log In Help Join The Motley Fool
Free Article Join Over 1 Million Premium Members And Get More In-Depth Stock Guidance and Research
By Zhiyuan Sun - Jun 4, 2021 at 7:49AM

Shares of this troubled marijuana grower are finally on the move, but does it mean you should buy them?

Cronos Group (CRON 4.49%) was once a prominent cannabis grower that has seen its fortune slide downhill since early 2019. Its strategy of focusing on research & development and selling cannabidiol (CBD) did not work out well in an industry dominated by high-concentration THC brands. (For those not aware, CBD is the second most prevalent active ingredient in cannabis after THC.)

However, its shares were up over 20% at one point over the past week, though it gave up some of those gains and is still up 11%, as investors realized the potential for Cronos to acquire a better-shaped cannabis company to help polish up its financials. Is this a stock you can count on? 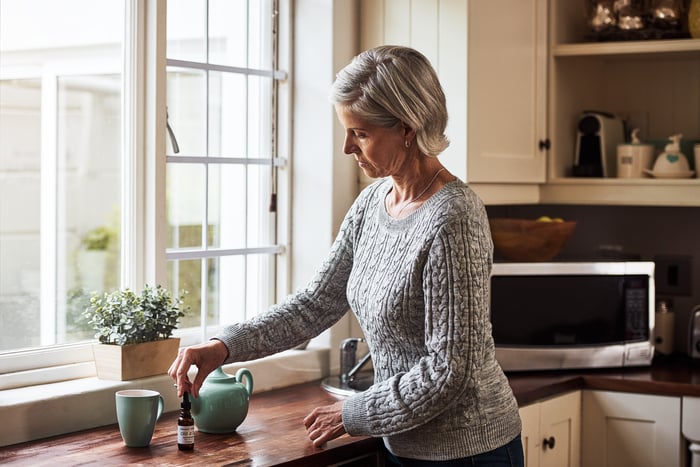 The catyalyst for the recent price action

On May 28, Quebec-based cannabis grower HEXO (HEXO 10.32%) announced it would be acquiring Redecan, the third-largest pot seller in Canada, for a total cash and stock consideration of 925 million Canadian dollars. The deal would create the largest cannabis company in Canada, with a combined market share of 17% for HEXO-Redecan. The HEXO acquisition sent the shares of cannabis companies having sizable cash balances soaring, including Cronos. The market is viewing well-capitalized cannabis companies with huge piles of cash to flex their muscles in the future through acquisitions. They do not need to issue new stock at the expense of existing investors or take on debt to buy out a competitor.

How is this related to Cronos?

During Q1 2021, Cronos's revenue increased 50% year over year to $12.6 million. Unfortunately, Cronos still could not break even in terms of gross profit, just like in the same period last year. Moreover, its operating loss stayed roughly the same at $43.5 million.

That means the company is losing about $3.45 for every $1 it generates in sales -- not the hallmarks of an efficient cannabis player. Despite its remarkable growth, Cronos isn't even among the top seven when it comes to market share. But that could all change with mergers and acquisitions

The Toronto-based Cronos has no long term debt, compared to over $1.2 billion in cash and investments. Most of its money came from Altria's (MO 0.43%) CA$2.4 billion investment in 2018 for 45% equity in the company, with an option to exercise warrants to purchase an additional 10% stake.

Cronos has not performed all that well since the investment closed. Hence, investors are starting to place hopes on the company acquiring a profitable competitor or two to polish up its financials.

Is there an alternative?

Unfortunately, Cronos really needs to flex its muscles in the mergers and acquisitions. Much of its potential lies in research and development, such as its partnership to produce low-cost, high-yield cannabinoids with Ginkgo Bioworks. Aside from that, it is also running preclinical studies with the Israel Institute of Technology to explore the use of CBD in skincare. These programs will take years to fully mature while consuming millions in cash in the process.

Currently, Cronos has a market cap of $3.32 billion, or an enterprise value (EV) of $1.67 billion after adjusting for its cash balance. Even then, its stock is trading for an expensive 32.7 times revenue. Keep in mind that its competitor Tilray (TLRY 4.71%), the second-largest cannabis company in Canada, is selling for 11 times EV-to-Sales. Meanwhile, HEXO stock's valuation stands at just 9.3 times EV/Sales.

Overall, due to its lack of brand strength and operational woes, it's best to avoid the stock and look for other alternatives in the booming marijuana sector. If you want to make a bet on its future, wait until the company announces a decent acquisition first. Even then, it would need to go on a wild shopping spree to justify its sky-high valuation.