Please ensure Javascript is enabled for purposes of website accessibility
Log In Help Join The Motley Fool
Free Article Join Over 1 Million Premium Members And Get More In-Depth Stock Guidance and Research
By Harsh Chauhan - Jun 5, 2021 at 7:24AM

Multiyear catalysts in this tech company's two biggest businesses make it worth buying.

NVIDIA (NVDA 4.28%) has been a top growth stock for many years. A $5,000 investment in this graphics card specialist five years ago is worth nearly $70,000 now, which isn't surprising given the pace at which the company has been growing. 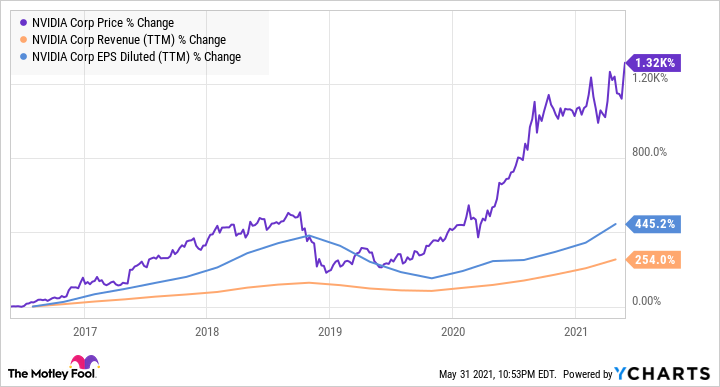 Such terrific growth has made NVIDIA stock expensive. It trades at nearly 77 times trailing earnings, which is higher than the five-year average multiple of 52. The price-to-sales ratio of 21.2 is also much higher than the five-year average multiple of 14. But NVIDIA remains one of the best bets for growth investors despite trading at such rich multiples because the chipmaker can sustain its high levels of growth for a long time to come and likely replicate its outstanding stock market performance.

Let's look at two reasons why.

The gaming business is set for multiyear growth

NVIDIA recently released results for the first quarter of fiscal 2022. It recorded astronomical growth in revenue and earnings once again, driven mainly by the stellar performance of the gaming business. Gaming revenue was up 106% year over year to $2.76 billion, and accounted for nearly 49% of NVIDIA's total revenue.

Record sales of NVIDIA's desktop and laptop graphics cards fueled the gaming business's solid growth. Management said cryptocurrency-related demand also contributed, though it wasn't able to quantify the impact. It is worth noting that the gaming business delivered outstanding growth despite a short supply of cards during the quarter.

NVIDIA is witnessing terrific demand for its Ampere-based RTX 30 series cards that have triggered a massive upgrade cycle. Graphics processing unit (GPU) supply is expected to remain thin in the second half of the year, but CFO Colette Kress said on the latest earnings conference call that the company expects "the RTX upgrade cycle to kick into high gear, as the vast majority of our GPU installed base needs to upgrade."

More specifically, only 15% of NVIDIA's massive installed base of 140 million GeForce graphics cards are currently running RTX series cards. This indicates that the company is at the beginning of a GPU upgrade cycle that could last for a few years. One of the reasons that will be the case is because a substantial chunk of NVIDIA's customer base is engaged in esports. According to management, "about 75% of GeForce gamers play esport games and 99% of esports pros compete on GeForce."

A powerful GPU is crucial in competitive gaming, as it can deliver higher average frame rates and reduce latency, increasing the chances of winning. As such, the growing craze for esports is going to be a tailwind for NVIDIA's gaming business. The good part is that the company is going all out to tap this market with a wide selection of laptops powered by the RTX 30 series cards covering several price points.

Mordor Intelligence estimates that sales of gaming GPUs could clock a compound annual growth rate of 14% through 2026. NVIDIA is one of the best ways to tap this opportunity, as it controls more than 80% of this market.

NVIDIA's data center business turned in a solid performance once again last quarter, with revenue rising 79% year over year to a record $2 billion. It accounted for 36% of total revenue. The segment's robust growth was driven by the increased adoption of the company's data center platforms by hyperscale customers for training artificial intelligence (AI) workloads.

NVIDIA management says that its A100 and DGX data center platforms are being deployed by customers "to train deep neural networks with rising computational intensity led by two of the fastest-growing areas of AI: natural language understanding and deep recommendators." Mordor Intelligence estimates that the deep learning market could post an annual growth rate of over 42% through 2025.

Meanwhile, NVIDIA is witnessing strong GPU demand for AI inferencing. Shipments of GPUs used for inferencing hit a record last quarter and the trend seems set to continue. According to NVIDIA, "GPUs can better keep up with the exponential growth in the size and the complexity of deep neural networks and respond with the required low latency." The chipmaker has already landed some notable customers in this space, including Microsoft, the United States Postal Service, T-Mobile, and others.

All of this indicates that NVIDIA is positioned to take advantage of the fast-growing market for AI chipsets. Additionally, the company is on track to expand its data center opportunity with the launch of the Grace server processor in 2023, a move that will help it attack a market worth $19 billion.

So, just like gaming, the data center business should also keep firing on all cylinders in the coming years and help NVIDIA sustain its high revenue and earnings growth rates. Analysts are currently expecting NVIDIA to clock annual earnings growth of nearly 27% for the next five years. But don't be surprised to see NVIDIA exceed that forecast and remain a top growth stock given the catalysts its two main businesses are enjoying.