Please ensure Javascript is enabled for purposes of website accessibility
Log In Help Join The Motley Fool
Free Article Join Over 1 Million Premium Members And Get More In-Depth Stock Guidance and Research
By Jeff Little - Jun 5, 2021 at 6:10AM

In a well-timed opening in line with vaccine rollouts and the lifting of many social restrictions, a new cannabis dispensary and superstore is about to debut near the beaches of Orange County, California. This -- second of its kind -- superstore from Planet 13 Holdings (PLNH.F 2.12%) will be a smaller version -- with a beachy vibe -- of its Vegas location, which takes you on an experience set in the tone of what you would expect from the Las Vegas Strip: a sensory activated LED floor, 3D projection visuals, and interactive laser art.

Planet 13 is a vertically integrated cannabis company based in Nevada, with award-winning cultivation, production, and dispensary operations in Las Vegas, where its current superstore is also about to be expanded to 112,000 square feet. (For comparison, the average Costco is 145,000 square feet.)

Imagine walking into a store almost the size of a Costco warehouse, but designed to grab your attention and entertain you while offering its products and providing educational information focused on the cannabis industry. It's through this strategy that the Las Vegas Planet 13 store has seen sales double since the start of the COVID-19 pandemic. 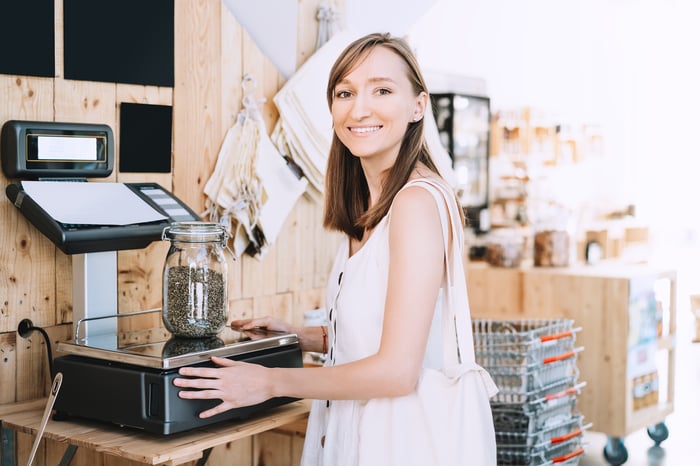 Planet 13 is now looking to expand toward the beaches of Orange County, California. The new superstore has a planned opening set for July. Though the location won't be quite as large as the Las Vegas store, the planned 55,000 square foot space in Orange County will resemble something of a cannabis mini-mall.

Inside the store, customers will be greeted with an entertainment and visualization mecca, complete with California beach vibes, waterfalls, digital screen displays, games, and activities, and eventually a smoking lounge. In addition to space for accompanying stores, the superstore will also house a 16,500 square foot dispensary, which will contain a Mexican-inspired restaurant. Construction on the new Orange County store is happening simultaneously with the Vegas expansion, as the company ramps up for the country's upcoming post-pandemic reopenings and minimized restrictions.

But the mere existence of the physical stores is not all that Planet 13 has going for it. The company offers curbside pickup, delivery, and is open 24 hours a day, seven days a week. Customers can also place orders online, as you would with any other typical retailer, through user-friendly website navigation. And the website is complete with a very helpful chat service for immediate customer assistance.

The growth and expansion for Planet 13 comes at a time when the company has strong winds at its back -- in the form of solid sales momentum. Its 2020 year-end results showed a fantastic uptick as well as a tremendous first-quarter jump in 2021. The company ended the year with revenue of $70.5 million, a year-over-year increase of 10%. Unfortunately, most of that was offset by higher cost of goods and total expenses, leading to a 50% drop in income from operations and a per share loss of $0.05 for 2020, or basically flat on a year-over-year basis.

For the first quarter of this year, the company is starting to gain better traction, with revenue increasing 42% year over year to $23.8 million for the quarter. This puts the company on pace to beat out 2020 full-year revenue. Gross profit was also up, and net income per share came in at a breakeven, compared to a loss of $0.01 last year for the first quarter. Revenue continues to move in the right direction for the second quarter, after a record-breaking day on April 20 -- the unofficial marijuana holiday -- resulting in over half a million dollars in sales in one day. The company also finished out the month of April with a single-month record of $10.7 million.

Behind growing revenue and enthusiasm for the cannabis industry in the U.S., Planet 13's stock price has been inching upward, but is currently hovering around 20% off of its 52-week high, with a 12-month price target of $7.18. With the current price quickly approaching that target, if we see second-quarter numbers come in with additional growth in revenue, and the company can keep expenses at bay, I wouldn't be surprised to see price targets raised in the near future.

An exciting second half is coming

The new Orange County superstore is set to open in July, and with COVID-19 restrictions easing significantly, it could potentially lead to a monstrous second half for Planet 13.
Retail stores require foot traffic, and with Las Vegas welcoming an average of 42 million people annually over the past 5 years, not including COVID-stricken 2020, cannabis enthusiasts would have a tough time avoiding a 112,000 square foot superstore. Not to be outdone, the Orange County visitors association proudly boasts that a record 50 million visitors came to its county in 2018, where they spent over $13 billion. With many travelers having a summer beach vacation, or possibly a Vegas trip on their minds, the strategy to hone in on massive crowds in a few strategic locations could make the second half of 2021 very exciting for Planet 13. Now might be a good time for investors to beat those crowds and add Planet 13 to their portfolio.

Jeff Little has no position in any of the stocks mentioned. The Motley Fool owns shares of and recommends Costco Wholesale and Planet 13 Holdings Inc. The Motley Fool has a disclosure policy.