This undervalued dividend stock finally found its footing in May.

Shares of the generic-drug giant Viatris (VTRS 3.70%) -- the offshoot of Pfizer's legacy-medicines unit UpJohn and generic-specialist Mylan -- roared higher by a healthy 14.6% during the month of May, according to data provided by S&P Global Market Intelligence . The drugmaker's stock rallied last month in response to a stronger-than-expected 2021 first-quarter earnings report. 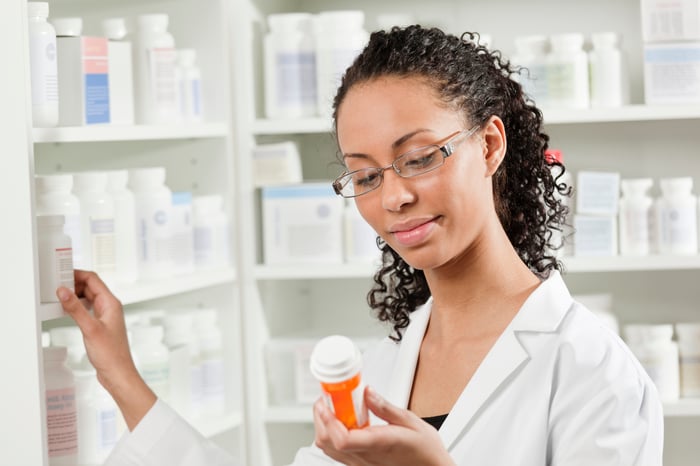 Viatris' shares were down by a whopping 29% year to date heading into May. Investors and analysts alike clearly weren't convinced that the company's stable of off-patent former blockbuster medicines could create value over the long term. Echoing this point, Bernstein analyst Ronny Gal has argued since the company's formation last November that it would have to partake in at least one major bolt-on acquisition to become a viable growth company.

Generic drugs, after all, have been facing a bevy of hurricane-force headwinds over the last several years, resulting in the steady erosion of profit margins across the space. Viatris, however, quieted at least some of its critics last month by rolling out a fairly healthy 2021 revenue forecast ($17.5 billion at the midpoint) and initiating a dividend program that amounts to a 2.86% annual yield at current levels.

Is this big pharma stock still a buy following last month's uptick? If you're the patient type with an appetite for deep value in your stock selections, Viatris arguably needs to be on your radar right now.

The key reason is that Viatris is one of the cheapest stocks within the realm of major drug manufacturers, with its shares trading at a forward-looking price-to-earnings ratio (P/E) of 4.15 as of the time of this writing. To put this valuation metric into the proper context, the average forward-looking P/E within the company's immediate peer group of large-cap biopharmas presently stands at around 34.

Viatris' shares are extremely undervalued from this perspective -- especially for a company that pays a dividend that hovers around the industry average. This generic-drug titan should thus appeal to both bargain hunters and dividend investors alike.