Please ensure Javascript is enabled for purposes of website accessibility
Log In Help Join The Motley Fool
Free Article Join Over 1 Million Premium Members And Get More In-Depth Stock Guidance and Research
By Billy Duberstein - Jun 10, 2021 at 8:30AM

As investors have flocked to SPACs, cryptocurrencies, and meme stocks, high-quality tech stocks like Tencent have become bargains.

With investors chasing the latest meme stock, cryptocurrency, or new IPO or SPAC, large-cap tech stocks like Tencent (TCEHY -0.21%) may seem like yesterday's news. In fact, you may not have noticed, but Tencent's stock has corrected more than 20% of its 2021 highs.

The sell-off doesn't appear to be due to anything wrong with Tencent's business, but rather outside factors such as inflation fears, growing U.S.-China tensions, and the ongoing anti-monopoly crackdown in China.  Yet with a strong, diverse, and growing business, along with a lower stock price, Tencent looks like a solid value at today's prices, as the above concerns appear baked into its stock price. 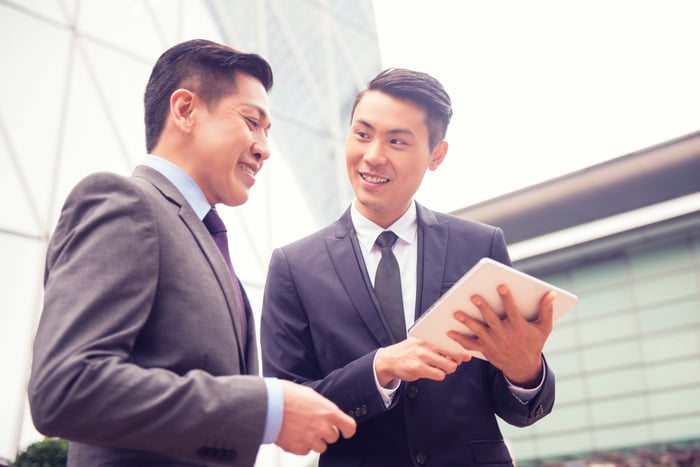 In the first quarter of 2021, Tencent reported good revenue and profit growth. While some may quibble with a deceleration in its core online games business and slight margin compression, the company turned in an otherwise solid quarter:

While the core video game segment, which is part of VAS, decelerated to 17%, it also had a tough comparison to the year-ago quarter, during which China was almost entirely in lockdown. Fortunately, the company's fintech and business services segment, which contains Tencent's electronic payments and cloud computing services, picked up the slack. Cloud deployments in China had actually been hampered by the pandemic, and Tencent is gunning to be a winner in this high-growth market, so that growth was great to see.

Why Tencent sold off on these results

There are a number of reasons Tencent might have sold off on otherwise solid results. First, some investors anticipate fines from China's market regulator. The State Administration for Market Regulation (SAMR) passed stricter anti-monopoly laws in February. Although those laws mainly target online e-commerce platforms, Tencent has significant stakes in various large e-commerce players that may be subject to regulations and/or fines. And while Tencent itself has managed to sidestep a lot of the pitfalls rival Alibaba has stepped into, it could still be the subject of fines, specifically for its data and algorithm usage to tip things in its favor.

Second, Tencent also said it would be stepping up its investments in a big way this year, which will lower its margin in 2021. Although operating profit will likely still grow, that growth will be somewhere between flat growth and the 22% growth logged last quarter, according to management. While management maintains these new investments in cloud, high-end video games, and short-form video are due to large growth opportunities, some may see it as a sign of intensifying competition. Tencent also said it would contribute RMB50 billion (roughly $7.8 billion) to a social equity fund, with the payoff being uncertain for shareholders. That social equity fund may be a pre-emptive move to please government regulators, so it's an open question as to whether there will be a return on this investment in the future.

More than any other large-cap technology company, Tencent has utilized its ample cash flows to invest in other high-growth technology businesses. By taking significant minority stakes in winning companies, from Pinduoduo in China to Sea Limited in Southeast Asia to Tesla in the U.S., Tencent's growing equity investee portfolio exceeded RMB1,362 billion, or just over $213 billion, as of March 31.

Assuming that figure has remained flat, then Tencent's $741 billion market cap is really about $528 billion for its core business. Tencent's net income attributable to equity holders was about $5 billion last quarter, about a $20 billion run rate, and that run rate, though muted by investments, should still grow throughout the year.

So Tencent's value outside of its investment portfolio is about 26 times its current earnings run rate. That seems fairly cheap for a company that sees large growth opportunities ahead, and which can also funnel its cash flows into a high-growth venture-capital-like portfolio.

While the regulatory concerns are valid, remember that Tencent bounced back strongly from China's late 2018 halt on video game approvals, which caused Tencent's price to fall during that period as well. Yet over time, game approvals eventually restarted, and Tencent's stock went on to new all-time highs.

Basically, Tencent remains a world class company, and long-term oriented investors shouldn't hesitate to take advantage of the current weakness in its shares.