Please ensure Javascript is enabled for purposes of website accessibility
Log In Help Join The Motley Fool
Free Article Join Over 1 Million Premium Members And Get More In-Depth Stock Guidance and Research
By Timothy Green - Jun 11, 2021 at 7:20AM

It's not too late to bet on the tech-giant's turnaround.

Century-old tech-giant International Business Machines (IBM 0.93%) has been trying and failing to tell a compelling turnaround story for years. The stock has been trending lower since 2013 despite significant progress shifting the business to high-growth areas like cloud computing and artificial intelligence.

IBM made a big move in 2019 with the $34 billion acquisition of software company Red Hat. The acquisition strengthened IBM's hybrid cloud-computing business, which is the foundation of the company's growth strategy. IBM views hybrid cloud as a $1 trillion opportunity, and Red Hat's OpenShift hybrid cloud platform is a market leader. 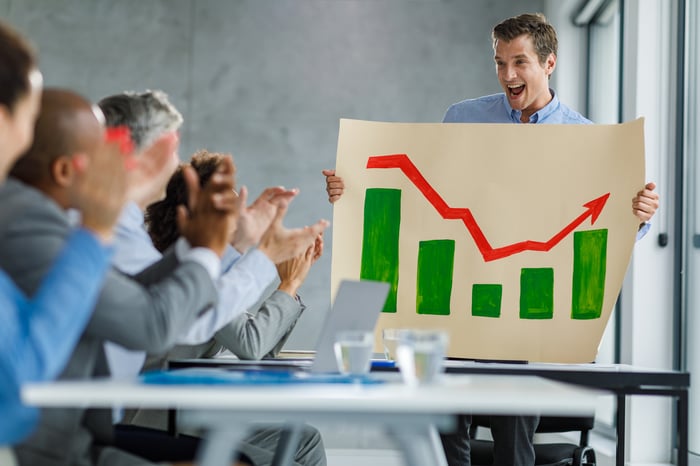 Adding Red Hat to the fold didn't really change the narrative. Due to accounting rules, it took a while for Red Hat's results to be fully reflected in IBM's numbers. Then the COVID-19 pandemic hit, leading IBM's customers to temporarily pull back on spending. The stock bottomed out at a 52-week low of around $105 late last year. 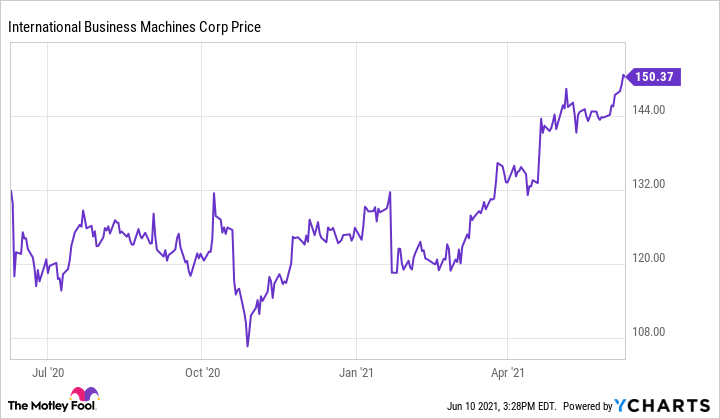 Ever since a somewhat disappointing earnings report in January, shares of IBM have been moving higher. Currently trading around $150 per share, the stock has gained more than 40% from that 52-week low.

It's impossible to know exactly why investors are changing their tune on the tech stock. The biggest development for IBM recently has been the planned spin-off of the managed infrastructure-services business. The new company will be called Kyndryl when the separation is completed later this year, removing about $19 billion of annual revenue from IBM.

The new IBM will be smaller, nimbler, and better able to shepherd its resources to the best growth opportunities. It should also be easier to produce revenue growth since a large chunk of slow-growing revenue will be gone.

The spin-off was announced soon after current CEO Arvind Krishna took the helm. Krishna was a key figure in the Red Hat acquisition and previously led IBM's cloud and cognitive software segment. While IBM was moving toward hybrid cloud computing under former CEO Virginia Rometty, that effort has now been turbocharged with Krishna leading the company.

Putting a cloud guy in charge of a company banking on cloud computing to drive growth makes a lot of sense. While IBM today still relies on services for the majority of its revenue, the company will derive more than half of its revenue from high-value cloud software and solutions once the spin-off is complete.

A value stock with a solid dividend

IBM stock isn't as cheap as it was last October, but it's still not very expensive. Analysts are expecting IBM to produce adjusted earnings per share of $10.90 this year, putting the price-to-earnings ratio just shy of 14. Earnings are likely still depressed due to the pandemic, so the bottom line could rise substantially as IBM recovers.

For comparison, the S&P 500 trades for around 45 times reported earnings. That's not exactly an apples-to-apples comparison, but it's clear that IBM is not a particularly loved stock right now.

IBM recently raised its quarterly dividend to $1.64 per share, marking the 26th consecutive annual increase. The stock sports a dividend yield of about 4.4%, far higher than the S&P 500's paltry 1.4% dividend yield. IBM's dividend will likely grow slowly for a while as the company continues its transformation, but dividend growth could pick up once the company returns to consistent earnings growth.

IBM stock has soared since bottoming out last year, but it's not too late to bet on a turnaround for the iconic tech company. Shares of IBM are still a solid value, and the stock could charge much higher if the spin-off delivers on its promises.