Please ensure Javascript is enabled for purposes of website accessibility
Log In Help Join The Motley Fool
Free Article Join Over 1 Million Premium Members And Get More In-Depth Stock Guidance and Research
By Zhiyuan Sun – Jun 11, 2021 at 6:33AM

This marijuana company was once worth more than Snapchat despite generating negligible revenue. It now seeks to make a comeback.

Tilray (TLRY 4.36%) has been a top-performing meme stock with a gain of 27% in the past month. That growth was almost entirely driven by unusual buying activity in its option chains by members of the r/WallStreetBets subreddit, which led to a small gamma squeeze.

On June 8, Tilray CEO Irwin Simon appeared on CNBC, applauding recent retail-investor interest in its stock. "We love having them as part of our shareholder base," said Simon. The CEO also promoted Tilray's new product launches, including a medical marijuana strain for treating pain and arthritis, as well as a new craft beer to be served on Delta Air Lines flights. Can renewed interest in its stock send its shares soaring back to all-time highs of $300? 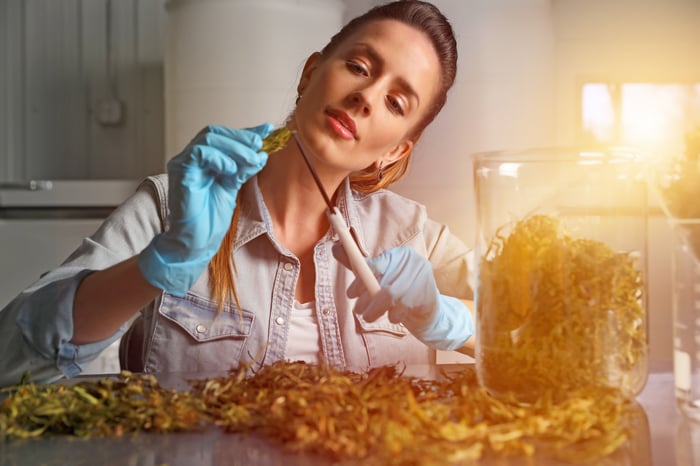 What's the "meme value" behind Tilray?

Tilray has had a tight-knit symbiotic relationship with retail investors from the start. Shortly after its IPO in July 2018, Tilary became the target of a bearish raid led by former short-seller Andrew Left of Citron Research due to the company's lack of sales and track record. Left no longer publishes short research after suffering losses from a meteoric rise in the price of GameStop (GME 1.00%) in January.

Back then, retail investors quickly noticed that Left and his colleagues had over-positioned themselves by shorting more than 44% of the shares Tilray offered in a tiny float. The company only sold a small portion of shares to raise money in this instance, with the vast majority of supply under an IPO lockup. Driven by a craze in the Canadian marijuana market, Tilray stock rocketed from its $17 IPO price to a high of $300 in a little over two months before monstrous profit-taking sent shares crashing down.

These setbacks were largely the result of provincial lockdowns in Canada to contain the coronavirus, which disrupted supply chains. Although that's mostly over now, it did bring to light the company's severe underlying problems.

During the first quarter of 2021, Tilray's revenue (standalone, excluding Aphria) fell by 7.8% year over year to $48 million. At the same time, cost-cutting measures were not effective, as the pot grower's operating loss remained roughly equivalent at $73.3 million. In the three months ended Feb. 28, Aphria's revenue increased by just 6.4% year over year. Its operating loss improved to CA$68 million from CA$90.8 million in the prior-year quarter but is still significant.

Tilray could use a similar boost in share price more than ever now. Not only are the two companies bleeding cash, but they also have a combined net debt of CA$462 million. So it would be really beneficial (albeit awful for short-sellers) if Tilray could take advantage of a rise in share price to issue stock and then pay back its debt in full for a fresh beginning. Canadian cannabis company Sundial Growers (SNDL 1.38%) used the same tactic in the first quarter and succeeded. As a result, both its management and investors (excluding short-sellers) now have much to be happy about.

However, note that a short squeeze on Tilray pushing it upward of $300 per share would send the company's market cap to over $130 billion -- a near impossibility.  Moreover, the stock is trading at 6 times price-to-sales (P/S), which is ridiculously expensive for a company that has minimal growth and is bleeding cash. For context, you can buy MSO stocks like Curaleaf and Green Thumb Industries (GTBIF 10.99%) for about the same valuation going forward, with much higher revenue growth and profitability.

Overall, there will probably a continued share run-up due to pure hype for Tilray's new products in the coming weeks, but don't expect the marijuana stock to return to all-time highs in the next five years.

Why Tilray Stock Fell 31% in December