Please ensure Javascript is enabled for purposes of website accessibility
Log In Help Join The Motley Fool
Free Article Join Over 1 Million Premium Members And Get More In-Depth Stock Guidance and Research
By John Ballard - Jun 16, 2021 at 8:30AM

Take-Two is investing aggressively in this one important area.

Activision Blizzard (ATVI -0.24%) has delivered wealth-building returns for investors, turning a $10,000 investment into $319,000 over the last 20 years. But Take-Two Interactive (TTWO -1.02%) has been a far superior investment over the most recent five-year stretch. Since June 2016, Take-Two stock has returned 386%, compared to Activision's 162% return.

For that outperformance, investors can point to the huge success of Take-Two's Grand Theft Auto V (2013), which has now sold 145 million copies. That level of sales is game-changing for a business that only generated $1 billion in revenue at the time of the game's release over seven years ago. Other titles, such as the NBA 2K series and Red Dead Redemption 2, have performed exceptionally well too.

However, strong game sales only partly tell the story. Previous game sales don't tell us anything about the future. How can Take-Two maintain its growth and outperform its peers over the next five years?

There is one clue from Take-Two's annual report, and that is the faster pace that Take-Two is hiring talent compared to Activision Blizzard. 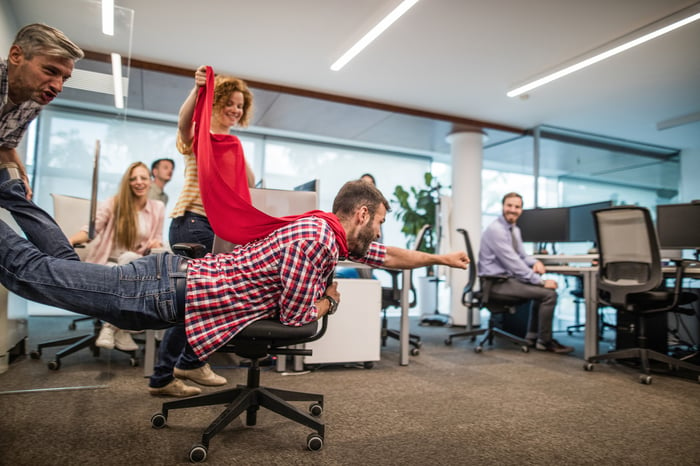 In its annual report, Take-Two says, "Creativity and innovation remain the core tenets of our organization and are the lifeblood of our ongoing success." In truth, this statement applies to all video game companies, but Take-Two's rate of hiring new employees not only explains why the business has grown faster than Activision, but also points to more growth ahead. 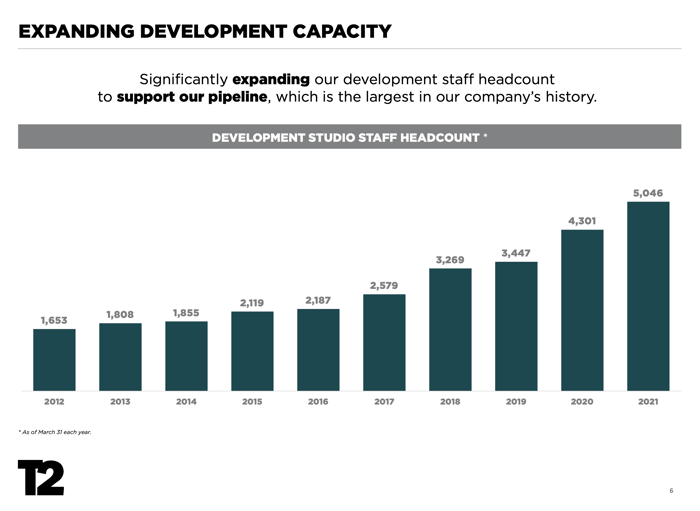 Specifically, Activision says that 61% of personnel, or about 5,795 employees, are working on game and technology development, representing a 3% increase over its development staff in 2019.

Clearly, Take-Two is hiring at a much more aggressive pace than its larger peer -- but it's important to match that spending on new employees with the company's growth in revenue and free cash flow to see what impact it is having on increasing the value of the business.

Take-Two gets more back the more it puts in

The difference is that Take-Two is generating more growth as a result of its research and development (R&D) spending, which includes personnel costs. Over the last five years, Take-Two has increased R&D expense by 165% cumulatively. Likewise, revenue grew at a similar amount of 132%, and free cash flow per share surged 676%.

These numbers are significantly higher than Activision Blizzard's, but there is a similar pattern. Activision increased R&D spending, or what it calls product development cost, by 63%, and got roughly an equivalent amount back in revenue growth. This shows that the more these companies invest in new talent, the more they get back in revenue and free cash flow, reflecting the higher rate of content that eventually gets released. 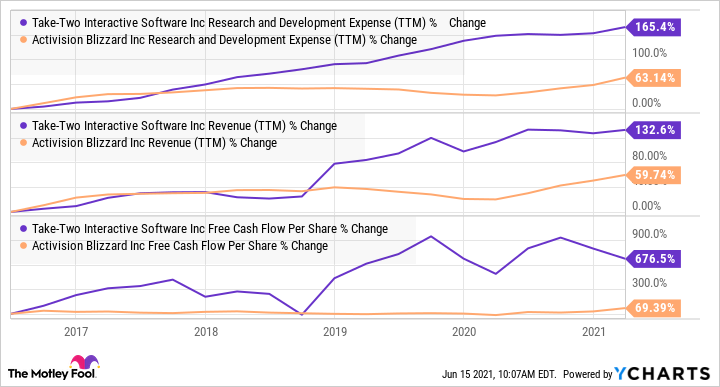 Take-Two has delivered better shareholder value mainly because it is investing at a higher rate in its business. But these numbers also show that Activision Blizzard is severely underperforming its potential. Activision is currently sitting on $9.3 billion in cash that it could reinvest to expand its development staff, potentially accelerating revenue growth and returns to investors.

Activision may follow that course. CEO Bobby Kotick announced on the company's first-quarter earnings call that it would hire 2,000 new developers from the start of 2020 through the end of 2022. The Blizzard side is currently working on several growth initiatives, including mobile versions of existing franchises, a remastered version of Diablo 2, Diablo 4, and Overwatch 2.

Given the growth Take-Two has delivered so far, it's clear management sees major opportunities to continue allocating capital to expand the business. It also recently announced the acquisition of mobile game maker Nordeus for $378 million.

The pace of investment ties in with Take-Two CEO Strauss Zelnick's bold prediction on the company's fiscal fourth-quarter earnings call, when he said, "[O]ver the next few years, we believe that we will establish new records of operating results even above the spectacular performance we delivered this past year."

Take-Two sees the video game industry continuing to grow larger over time, and it's backing that up with real investment in its most important asset.