Please ensure Javascript is enabled for purposes of website accessibility
Log In Help Join The Motley Fool
Free Article Join Over 1 Million Premium Members And Get More In-Depth Stock Guidance and Research
By Will Healy - Jun 16, 2021 at 6:38AM

A look at Snap behind the filters.

Two years ago, Snap (SNAP 5.34%) appeared destined to watch its business be eroded by the 800-pound gorilla of social media, Facebook (META 0.22%), as the growth in its user base stagnated. However, improved monetization, proprietary content, and augmented reality (AR) have changed the game for Snap stock and sent it to record highs. That leaves this question for investors: Is Snap a buy after reaching new heights? 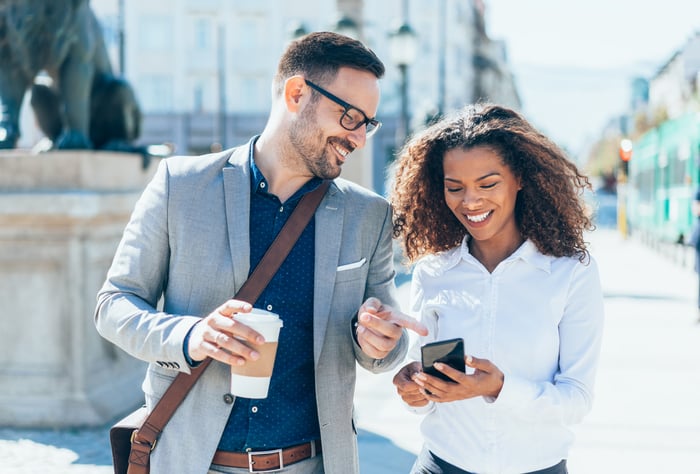 Snap has thrived in a competitive environment

Snap has billed itself as a "camera company." It set a goal of improving the way its users live and communicate as well as helping people express themselves, learn, and have fun.

This originated with its filters. Now, with the release of Spectacles 3, Snap has expanded its offerings to those interested in augmented reality. While the previous version of the eyewear snapped regular photos, Spectacles 3 includes a second camera that perceives depth. This allows its software to add filters to videos shot by Spectacles. The recently announced purchase of WaveOptics, a manufacturer of parts for AR glasses, should deepen its commitment to this space.

Nonetheless, investors should understand that the investment case for Snap may only be a question of the strides it has made in spite of (and against) Facebook. Initially, Snap fought back as Facebook made a direct play for Snapchat's customer base through its Stories feature and photo-oriented app, Instagram. Snapchat gained traction by modifying its platform to help it monetize ads and added proprietary content of its own. It also continued its rivalry with Facebook through Spectacles, competing against Facebook's Oculus virtual reality (VR) headsets.

Snap's strategy seemed to work as the company resumed growth in its daily active user (DAU) count and experienced larger revenue increases. As of the end of the first quarter, Snap reported 280 million DAUs, up 22% over the previous 12 months.

However, much of the increased DAUs came about due to the pandemic forcing more activity indoors. Also, even by its own admission, a large portion of its DAUs come from younger users. Unfortunately, this demographic commands low earnings power compared to older peers. Moreover, it explicitly stated that user growth could stop if users do not perceive its products as "fun, engaging, and useful." The difficulty of defining that concept could deter investors who seek a more solid investment case. Additionally, management mentioned the high bandwidth needs of Snap's products, a limitation that could affect growth outside of the developed world.

Nonetheless, those challenges do not appear to have slowed growth in the near term. In Q1 2021, revenue increased 66% to $770 million from year-ago levels, outpacing the 46% revenue increase in fiscal 2020 compared with the previous year. Snap's revenue also exceeded the 43% increase in operating expenses for Q1. During that quarter, Snap experienced lower interest costs and an increase in income from non-core sources such as gains in non-marketable securities and foreign currency transactions. Still, the net loss of $287 million came in only 7% below its loss in the year-ago quarter. Likewise, the 2020 loss of $945 million merely reduced its loss by 9% compared with 2019 levels.

Snap forecasts revenue between $820 million and $840 million in the second quarter. That means revenue should come in at least 81% higher compared to Q2 2020. Still, Snap did not make a forecast beyond Q2. Social media companies are all facing some level of uncertainty, as the retreating threat of COVID-19 could result in less social media engagement, leaving them reluctant to offer full-year forecasts.

Despite the loss, Snap reported its first positive free cash flow figure, generating $126 million in free cash flow during the quarter. With an interest expense for the quarter of only $5 million and liquidity of just under $1.6 billion, its losses do not threaten the company's financial stability in the near term.

Happy with Snap's growing DAUs and rising revenue, investors have taken the stock over 200% higher over the last 12 months. 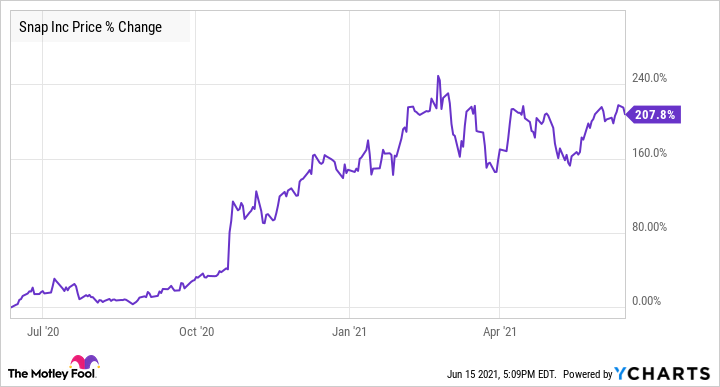 Unfortunately, this has taken its price-to-sales (P/S) ratio to 32. That comes in well above the P/S ratios of Facebook, Twitter, and Pinterest. Facebook and Twitter also turned a profit in the previous quarter, a fact that may reinforce the investment case for those stocks over Snap.

Should I buy Snap?

Although Snap has staged an impressive comeback with its added functionality and move into AR, investors may want to avoid this company for now. Snap has expressed uncertainty about the upcoming quarters. Moreover, the bulk of its user base remains lower-income younger users. In time, the company may attract a larger proportion of older users and may continue to compete effectively against Facebook. However, without these improvements, the media stock could struggle to justify its higher sales multiple.