Please ensure Javascript is enabled for purposes of website accessibility
Log In Help Join The Motley Fool
Free Article Join Over 1 Million Premium Members And Get More In-Depth Stock Guidance and Research
By Jeff Little – Jun 17, 2021 at 9:19AM

The Helix plaza could bring a Beyond / Hello dispensary to the Virginia community.

You've probably heard the mantra, "location, location, location," especially if you've ever been in the market for a new real estate purchase. That phrase carries plenty of weight in the cannabis market, too -- and Jushi Holdings (JUSHF -6.72%) could be a prime example. The company is set to profit from its recently completed purchase of Dalitso LLC, which owns a pharmaceutical permit in Virginia. And northern Virginia in particular is gearing up for the coming of Amazon's (AMZN -2.72%) new HQ2, expected to begin construction in 2022 and be completed by 2025.

Jushi is a vertically integrated multi-state cannabis operator with cultivation, processing, and dispensary facilities spread across seven states ranging from Massachusetts to California, plus CBD hemp assets in New York. The primary focus for its cannabis operations is its "Beyond/Hello" dispensary brand, which has a heavy concentration in the Mid-Atlantic region and Pennsylvania, and is now moving into Virginia. 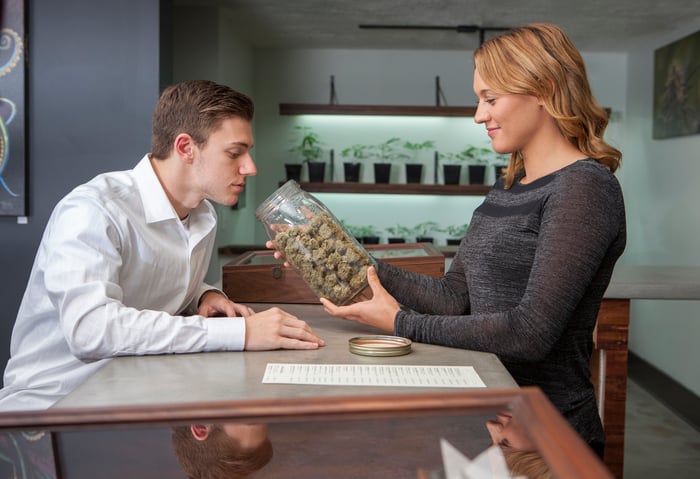 Jushi has 13 dispensaries in Pennsylvania, its largest concentration of any state, with plans to expand to 18. With the acquisition of Dalitso, the company is looking to expand what is currently one location in Virginia, selling cannabis for medical use, into six additional retail stores and a grow facility complete with processing operations.

This strategic acquisition will not only provide Jushi with a larger footprint in Virginia, but will place it in a central location serving some of the most densely populated counties in the state, home to nearly 30% of the state's total population. A larger footprint and more attention to brand should set up nicely for Jushi once recreational-use marijuana is legal on July 1 of this year, though no recreational sales can begin until 2024.

Amazon's coming Virginia headquarters is expected to add nearly 1,900 new jobs to that region, bringing the total worker count to 3,500 once those new positions are filled. Some of those positions will likely be filled by residents from neighboring counties, including Fairfax, Prince William (home to Jushi's current single Virginiadispensary), and Loudoun, which is currently identified as the richest county in the entire country.

In addition to bringing new job opportunities to the area, Amazon is planning to promote increased social gatherings and special events in and around the retail shop locations in the plaza area of its new headquarters space. While there's no word yet on whether those retail shops may include a Jushi Beyond/Hello dispensary, the timeline for state legalization certainly lines up nicely. .

As one of only five vertically licensed operators in the state, Jushi should have a stronghold on the region and the potential for growth in market share due to its exclusivity rights. The company will also benefit from Amazon's recent public statement that it is no longer including cannabis in its drug screening process, except where regulated by the Department of Transportation (such as in the case of delivery drivers).

This policy could have a huge impact on neighboring businesses across the region. Other companies could follow Amazon's lead, paving the way for increased marijuana sales as employees take advantage of loosened restrictions.

According to Jim Cacioppo, CEO, chairman, and founder of Jushi, the company's new vertically integrated license will provide it with access to a young, high-income population that is expected to be part of a rapidly growing medical cannabis market. Although the medical cannabis market in Virginia is only expected to reach $10 million in 2021, the estimated growth is for $50 million by 2024. This bodes well for cannabis operators as bringing attention to brand is built up leading up to the anticipated sales of recreational-use marijuana slated to begin in 2024, with an estimated value of $580 million over the first five years.

As Jushi continues to expand through acquisitions and new store openings, it's experiencing growth in revenue. For the first quarter, revenue rose from $8 million to over $41 million on a year-over-year basis. However, net loss also inched up in the quarter, from $0.17 per share to $0.18 per share. The good news is that the company is showing growth, and while net loss may not be what some investors would like to see, this is not uncommon for companies in the early stages of entering the cannabis market.

It may take a few years before we know the impact Amazon will have on Jushi's potential success. The medical cannabis market value is expected to hit $50 million in Virginia by 2024. That same year, recreational marijuana sales in Virginia is expected to begin, followed by Amazon's HQ2 completion in 2025 -- both of which should hold strong future value. But for the time being it's worth keeping an eye on this company as it continues to increase its footprint through acquisitions and the opening of new dispensaries in the Mid-Atlantic region.

Market share will be up for grabs, and fierce competition is likely to come from Curaleaf, Columbia Care, and Green Thumb Industries. In particular, Green Thumb and Columbia Care have both made recent acquisitions to bolster positions in Virginia, but Jushi's key location near the richest county in the country and at the doorstep of Amazon HQ2 should bode well for its future. As my fellow Fool writer, Keith Speights, points out, Jushi could be Virginia's biggest winner with marijuana legalization.