Please ensure Javascript is enabled for purposes of website accessibility
Log In Help Join The Motley Fool
Free Article Join Over 1 Million Premium Members And Get More In-Depth Stock Guidance and Research
By Taylor Weldon - Jun 22, 2021 at 10:31AM

Here's why AI is likely to be an increasingly valuable competitive edge for Salesforce over the next four years.

salesforce.com's (CRM -0.86%) latest earnings report was the best in company history, according to CEO Marc Benioff. Investors didn't seem to disagree, as the cloud services company's stock price jumped 10% the day following the release and has sustained an upward trend since.

Still, one of the biggest pieces in Salesforce's growth story is talked about the least, both in earnings reports and otherwise. Salesforce built Einstein, the company's sales and productivity artificial intelligence (AI) bot, by studying ethical AI after Microsoft's (MSFT -0.26%) AI bot Tay infamously adopted offensive behavior in 2016.

Now, the company has market leadership in customer relationship management (CRM) and can utilize this foothold for data to improve its AI even further in the sales productivity space. With AI spending poised to skyrocket, Salesforce is already ahead of the game in market share and ethical technology. 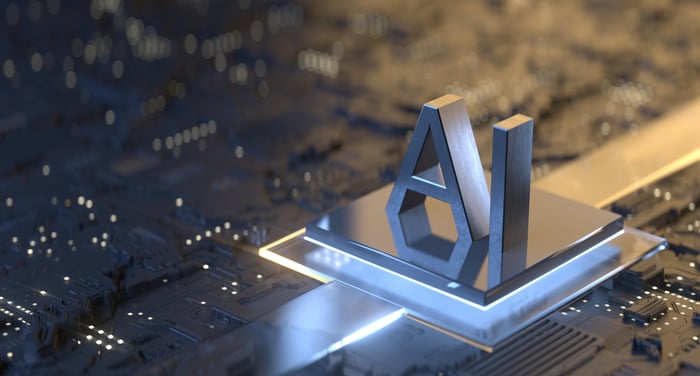 AI's place in the growth story

Salesforce still has room to grow, and the company continues to add complementary offerings to its Customer 360 platform (i.e., its core business). Although Salesforce holds the No. 1 spot in the CRM industry by far, that leadership position translates to only 20% of the market -- indicating much more room for growth in Salesforce's core business.

Looking long term, global AI spending is slated to double in the next four years. Salesforce could use its market leadership in CRM to lead the market in providing sales and productivity AI solutions in the U.S. as this transformational market-doubling AI revolution occurs.

Salesforce recognizes that ethics are critically important in scaling AI solutions -- a lesson learned from Microsoft's chatbot (called "Tay") in 2016. When Microsoft gave the chatbot a platform on Twitter, the AI quickly "learned" from its surroundings and began posting tweets that were almost entirely hateful and offensive.

Granted, Microsoft intended to deploy Tay as an experiment. Still, her brief time exposed to real human conversations -- both good and bad -- was a shocking example of AI "conversational understanding" gone very wrong. Companies should understand that developing AI is not just a technical endeavor, but a profoundly social one as well.

Why Einstein has the edge

Put simply, Salesforce currently has the edge in sales intelligence AI because it beat Microsoft and other major players to the punch by several years in providing low-code sales AI solutions. Further, Salesforce's massive market share and impressive customer retention (typically above 90%) make it harder for competitors to catch up now that they're behind.

This time-to-market argument is especially true for software-as-a-service (SaaS) companies like Salesforce, because switching costs tend to be high compared to other industries. When an entire team is trained on using one platform, the cost to switch to another can be steep as it involves lost productive time, time spent migrating information, and time spent training employees on the new software.

As far as the technology goes, Salesforce's client base is a major benefit in training Einstein to be smarter, build more use cases, and increase customer value. The more data that AI has to learn from, the faster it will improve and make more predictions -- such as forecasting which sales leads are most likely to convert, how a chatbot should respond to a customer inquiry, and which email send times are optimal based on customer data.

How ethics can help Einstein keep the edge

As Einstein scales, it is likely to be more equipped than the competition in adhering to ethical AI principles. Salesforce has employed a dedicated AI ethics team since 2018, shortly thereafter opening its Office of Ethical and Humane Use and hiring its Chief Ethical and Humane Officer.

These positions and offices are not just for show -- Salesforce has done the research on ethical AI and has the technology to prove it. One example of this is Einstein's "sensitive features" fields, which allow an admin to indicate which fields are "sensitive," meaning they may add bias to a model, like age, race, or gender. Einstein then looks for fields that are highly correlated with the sensitive fields and flags them for review.

This process effectively avoids unintended bias, such as a bank using ZIP codes as a factor in determining eligibility for a loan -- the ZIP codes in question could be unknowingly correlated with race or age.

Microsoft is in no way ignoring the gravity of ethical AI, but again, Microsoft lags behind Salesforce in time to market. Microsoft's Office of Responsible AI was opened just last year as part of its existing Corporate, External, & Legal Affairs (CELA) branch. So, Microsoft is not just late to the space compared to Salesforce -- it is late to developing ethical AI applications that are critical to building customer trust and retention.

Trading at a price-to-sales ratio of 9.93, Salesforce stock is a cheaper buy than competitors like Microsoft, HubSpot (HUBS -3.62%), and Adobe Systems (ADBE -2.18%). The stock is priced to buy and hold while its CRM and AI applications develop.

Keep in mind that Microsoft and Adobe have a developing partnership with C3.ai (AI -2.19%) focused on AI in CRM. The trio lags far behind in market share, and the product they offer is industry-focused, narrowing its potential customer base. However, this powerful partnership will be one to watch.

As long as Salesforce continues gaining market share and Einstein gains more ethical use cases, the company should maintain its position as the dominant force in CRM solutions. As AI applications become a more prominent factor in this space over the next four years, Salesforce is ready at the wheel to get the job done right.