Please ensure Javascript is enabled for purposes of website accessibility
Log In Help Join The Motley Fool
Free Article Join Over 1 Million Premium Members And Get More In-Depth Stock Guidance and Research
By Jeremy Bowman - Jun 23, 2021 at 7:00AM

The upstart scrubs maker has a lot in common with the athleisure champ.

It's not often that the apparel industry gets disrupted.

How we dress is decided more by lifestyle and current fashions than technology, and while brands might dominate for a few years, it's difficult to establish a lasting empire in the sector.

lululemon athletica (LULU -0.57%) was probably the last successful disruptor in apparel. The yoga-inspired maker of technical athletic apparel essentially created a new category, athleisure, with its high-end leggings and yoga pants, making leggings acceptable for casual outings or even for work. Lululemon is now worth around $50 billion and is the clear leader in the category it pioneered, and it has since expanded into segments like loungewear.

Recent IPO Figs (FIGS -4.76%) wants to carve a similar path in the healthcare apparel industry. Figs hopes its strength in technical apparel like scrubs can lead to growth in nonmedical categories as well. The Wall Street Journal likened it to another disruptive brand, calling it the Warby Parker of scrubs. Let's take a closer look at Figs, the fast-growing apparel maker now valued at $8 billion. 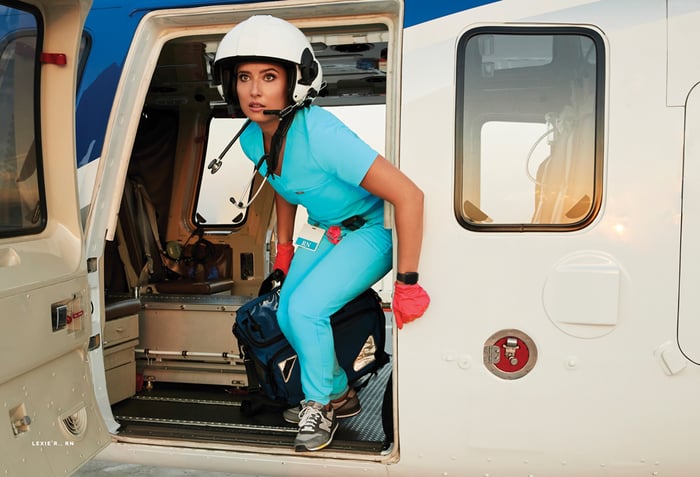 Figs was founded in 2013, and its stock has taken off like a rocket since its IPO a month ago. Shares have more than doubled from its $22 IPO price. Wall Street also roundly cheered the stock in its initial wave of coverage.

Its recent growth has been phenomenal. The direct-to-consumer company got a boost during the pandemic with revenue jumping 138% to $263.1 million last year, following 102% revenue growth in 2019.

Revenue gains even accelerated in the first quarter, jumping 172% to $87.1 million as it lapped the beginning of the pandemic in 2020. Unlike most fast-growing companies, Figs is also profitable. It had an adjusted EBITDA of $69.1 million and a margin of 26.3% last year. On a generally accepted accounting principles (GAAP) basis, it finished with $49.8 million, or a profit margin of 18.9%.

Figs has emerged as a disruptor in the healthcare apparel industry with savvy marketing targeted at millennials on social media and more-traditional channels, and its direct-to-consumer model eliminates the need to visit dingy medical supply stores. The company spent two years developing its proprietary technical fabrics, and according to reviews, many customers say they are much more comfortable than traditional cotton scrubs.

Will the growth story continue?

Figs is penetrating a healthcare apparel market valued at $12 billion domestically and $79 billion globally, giving it plenty of room to grow. But the company is likely to encounter intensifying competition as it has proved that an online seller of technical fabrics can both grow by triple digits and be highly profitable. That growth could attract competition from a wide range of start-ups, incumbents, and others -- much in the way that Lululemon has, with chains like Gap launching Athleta, and other companies coming out with their own house brands for athleisure and yoga pants.

Figs charges a premium for its apparel, with prices starting at $38, compared to traditional cotton scrub tops that can be as low as $10. This leaves the door open for another company to undercut it on price.

In fact, Figs already faces substantial competition. There are other start-ups like Jaanuu using the same direct-to-consumer model, which seems likely to become the norm in the industry since scrubs are well suited to e-commerce.

Is Figs a buy?

After its recent rally, the stock has gotten especially pricey. The company is valued at close to $8 billion, a range Lululemon traded in as recently as 2017, when it was a much larger company than Figs is today. On a price-to-sales basis, Figs is currently valued at 23, and it trades at a price-to-earnings ratio of 125.

Growth is likely to slow down as the company matures, faces increasing competition, and laps the blowout growth during the pandemic last year, even though it will continue to capture market share. At this point, the stock is one I'd add to my watch list, but the current valuation seems a little too rich for a company that I'm not yet convinced has a sustainable competitive advantage.

3 Reasons Figs Is a Buy

1 Bargain Buy That Just Got Crushed

Why Figs Stock Is Crashing Today