Please ensure Javascript is enabled for purposes of website accessibility
Log In Help Join The Motley Fool
Free Article Join Over 1 Million Premium Members And Get More In-Depth Stock Guidance and Research
By Rich Duprey - Jun 23, 2021 at 9:23AM

Past performance may be disappointing, but future growth should be hot.

With all that Corsair Gaming (CRSR -4.69%) has going for it, investors are undoubtedly frustrated its stock is down 12% so far this year and 37% below the highs hit shortly after going public last fall.

But patience is a virtue, and there's every reason to believe this gaming equipment and accessories maker is just getting started. Even though gaming is a mature business, two relatively new trends will take Corsair Gaming to the next level. Here's why you should be paying attention. 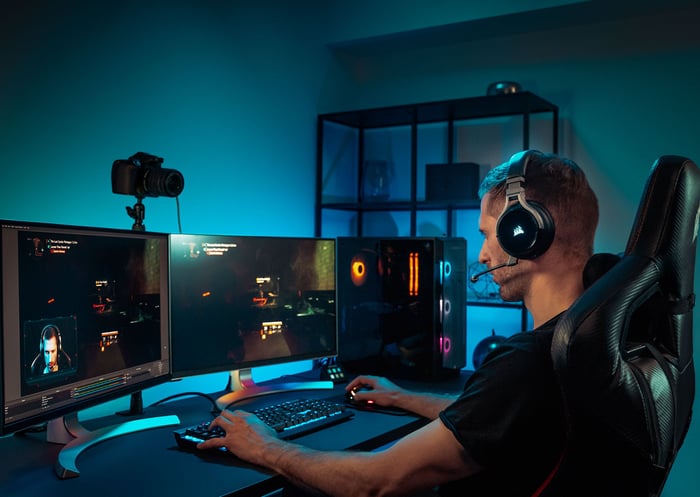 All the pieces in place

Corsair Gaming was a big beneficiary of the COVID-19 pandemic because people were forced to stay home and many turned to gaming for entertainment. Now, even as many public entertainment options are reopening, Corsair still continues to see massive growth.

First-quarter revenue jumped 71% from the year-ago period, pushed higher by the peripherals business surging 131% while the components and systems segment rose 59% year over year. Corsair enjoyed across-the-board growth in profits as gross profits doubled, adjusted operating profits tripled, and net income surged from $0.01 per share to $0.47 per share.

Gamers are investing in gaming systems that cost $2,000 or more, which indicates there will be heavy gameplay for years to come driving even more peripheral sales. Corsair won't see this kind of meteoric growth every quarter, but it ought to be able to build on its already market-leading position.

Esports may serve as the catalyst for that growth, as it could very well be the future of gaming. Global revenue is expected to hit $1.1 billion this year. The latent demand that was suppressed by the pandemic as in-person tournaments and events were canceled could have it reach $3.5 billion in revenue by 2025, according to research and analytics firm Juniper Research.

Before the COVID-19 pandemic, companies were exploring the potential of this new entertainment outlet. GameStop (GME -3.96%), for example, announced a series of esports partnerships, including with leading esports team Complexity Gaming where the retailer serves as the team's title sponsor at its Texas performance center.

But various other chains completely unrelated to the market joined in as well. Chipotle Mexican Grill started sponsoring esports tournaments, both AT&T and Mercedes-Benz partnered with league operator ESL as sponsors, and toymaker Hasbro began revising how its Magic: The Gathering card game relates to esports and tournaments.

Arguably more important has been Amazon's Twitch content-sharing platform, which has made esports and gaming available globally, and arguably offers Corsair an opportunity to partner with some of the platform's biggest players. There are opportunities with Alphabet's YouTube Gaming and Facebook Gaming as well since they are two equally essential markets for reaching players and fans.

Esports is also a global phenomenon to be sure, but as big as esports might become, there's an even bigger opportunity in the wider world of the fans of gaming video content. Livestreaming of events poses monstrous growth possibilities.

Where gaming is going

Of course, it's an intensely competitive market. Logitech undoubtedly has better name recognition than either Corsair or Turtle Beach, though the latter made a name for itself during the height of the Fortnite gaming frenzy a year or so ago.

While both of Corsair's competitors can give it a good run for its money on peripherals and computer gear and systems, I think where Corsair distinguishes itself is setting up gamers for the livestreaming future of the industry.

Its acquisition of Elgato in 2018 really set the stage for where gaming is heading. Its focus on capture cards, control panels, green screens, and other equipment designed specifically for streaming sets it apart from the pack.

At under 16 times estimated earnings, Corsair offers a cheaper valuation than either Logitech or Turtle Beach. Wall Street pegs it to grow earnings at a lower rate than either of its rivals, but I think analysts may be missing the streaming aspect for generating superior earnings growth (they do see Corsair handily outpacing the pack on revenue growth, however).

Corsair Gaming looks like the one to beat here, and I think investors will find that the esports equipment leader is ready to take off.