Please ensure Javascript is enabled for purposes of website accessibility
Log In Help Join The Motley Fool
Free Article Join Over 1 Million Premium Members And Get More In-Depth Stock Guidance and Research
By Sam Swenson, CFA, CPA - Jun 24, 2021 at 5:57AM

It's usually -- but not always -- a good idea to take your 401(k) funds with you when you leave an employer.

A recent study from 401(k) rollover specialist firm Capitalize revealed that Americans have, in total, a stunning $1.35 trillion of "forgotten" retirement assets. Many people who change employers don't roll over their 401(k) when they do so. As a result, the assets in those plans are often left to sit unmanaged by their owners, and allocated in suboptimal ways.

If you have an old, ignored retirement account that's invested in funds with high fees and low returns, over the decades, that could cost you a lot in lost returns -- hundreds of thousands of dollars in a worst-case scenario.

Enter the 401(k) rollover. For many reasons, it often makes sense to bring your retirement account assets along to your new employer's plan when you change jobs. However, there are situations where you could be better off leaving it alone. Simply taking the time to think through the decision puts you far ahead of those who have left 401(k) accounts behind and forgotten about them.

If you ultimately do decide to roll over your retirement account, be sure to know the mechanics (and the consequences) of the entire process. Here are four things you'll need to know.

Most traditional 401(k) plans operate on a tax-deferred basis: You get a tax deduction for your contributions to the plan in the year that you make them, and the money you have invested in the plan grows untaxed until you withdraw it.

If you have a tax-deferred plan, you'll need to be sure to roll over your 401(k) to another tax-deferred account. Failure to do this can have really unpleasant tax consequences.

Say you were to roll a 401(k) into a Traditional IRA. This, generally, is completely acceptable as both of those types of accounts share the same type of tax-advantaged status.  However, if you were to roll your pre-tax 401(k) into a Roth IRA, that'd be treated as a Roth conversion, and unpleasant consequences could ensue. Unless you made that move as the product of careful financial and tax planning, you'd be liable for a potentially significant tax bill. 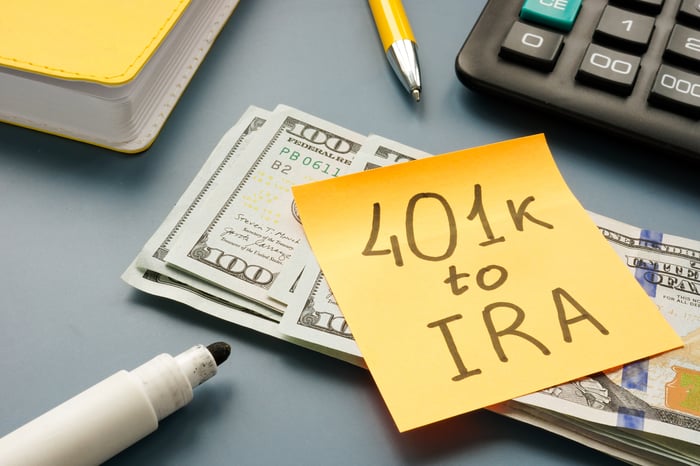 2. The details of your new plan

If your new employer has a 401(k) plan as well, you should look to see if the new plan allows "roll-ins" from other qualified retirement plans. If it does, you'll have the ability to seamlessly merge your previous 401(k) with your new one -- assuming, again, that the tax status of the two accounts is the same.

If your new plan doesn't allow for this, you still have the option of rolling your old account into a Traditional IRA. Alternatively, if you're switching to a situation where you will be self-employed, you may want to open a Solo 401(k) or SEP IRA, and roll your old 401(k) balance into that account if allowed.

Your new employer's plan may also feature lower fees and easier administration than your previous one. If this is the case, it's a great idea to get started on a rollover as soon as possible. If not, there's less of a need to rush.

With some 401(k) plans, the balance you see when you log in to your account may not actually be the balance you can take with you when you leave. Some employers have vesting schedules, which define when your employer's contributions to the account actually become yours for the taking. The longer you work for an employer, the more of those contributions become "vested" -- and thus, really yours. So you might see a total balance of $50,000 on your account, for example, but if only $40,000 is "vested," that's the amount you'd be able to take with you if you left the company.

4. The difference between a direct and indirect rollover

A direct rollover is the direct transfer of funds from one retirement plan provider to another. The money never actually hits your personal bank account, and generally causes no tax impact to you.

Indirect rollovers are a bit more complicated, and you should probably avoid them if you can. In an indirect rollover, your former plan provider will write a check directly to you. Then, you'll need to take it upon yourself to actively put the money into a new 401(k) or IRA. If you fail to do this within 60 days, you'll be liable for taxes and penalties on any money not deposited into a new account.

Less complicated than it seems

Rolling over a 401(k) account is actually a simple process though there are some caveats to be careful of. But the key in the end is to know where your money is invested, and to keep making smart choices about how your retirement assets are allocated. Once you've successfully rolled over the funds from your old plan into your new one, you can enjoy many years of consolidated compound growth -- hopefully from funds that charge lower fees and produce higher returns.