Please ensure Javascript is enabled for purposes of website accessibility
Log In Help Join The Motley Fool
Free Article Join Over 1 Million Premium Members And Get More In-Depth Stock Guidance and Research
By Sushree Mohanty - Jun 24, 2021 at 6:11AM

The merger with Aphria has put this Canadian pot company on the map.

The mega-merger deal between Canadian cannabis companies Aphria and Tilray (TLRY -5.17%) was the highlight of the marijuana industry this year. The deal closed on May 3 and the "new" Tilray was formed, and in the process, became the world's largest cannabis company by revenue.

The legacy Aphria has always been a strong contender in the cannabis space because of its smart growth strategies. Legacy Tilray, on the other hand, was a rather small company, which had a market cap of $1.1 billion before the merger was announced, but now holds a market cap of $7.7 billion.

Since this was a reverse merger, the legacy Aphria's management holds the decision-making powers. In fact, Aphria's shareholders now own 62% of the new company, with Irwin Simon (Aphria's CEO and chairman) leading the combined entity. Here are all the ways Tilray can benefit from this merger, and why this business is a smart buy for the long term. 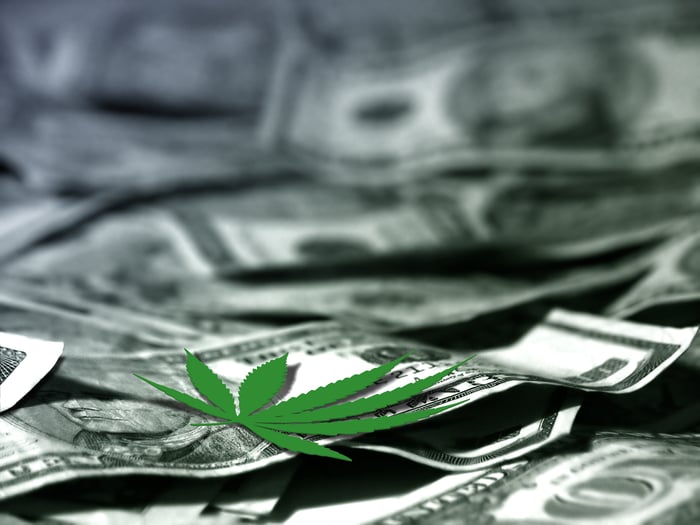 What's in this merger deal for Tilray?

Mergers and acquisitions are not uncommon in the marijuana industry. Before this merger, Aphria acquired American craft beer maker SweetWater Brewing in November 2020 to make an entry into the U.S. cannabis beverage market. Beverages are part of cannabis derivatives (vapes, edibles, concentrates, and more), additional recreational products that Canada legalized in October 2019. Tilray had already made an entry into this category in October with a new line of cannabis-infused edibles through its wholly owned subsidiary High Park Holdings. By pooling its resources and capital, the combined company can launch even more derivatives, competing with peers like Canopy that are rapidly expanding in this segment

In its recent fourth-quarter fiscal 2020 results, the legacy Tilray recorded a 20.5% year-over-year jump in revenue to $57 million. For the full year, the company reported a 26% increase in revenue to $210 million from 2019. Tilray also saw a positive adjusted EBITDA (earnings before income, tax, depreciation, and amortization) of $2.2 million, compared to a loss of $35.3 million in the year-ago period. This was Tilray's first quarter of positive EBITDA before merging with Aphria -- and it is a good start.

Aphria has been generating positive adjusted EBITDA over the past seven quarters. Now, Aphria's strong balance sheet and its management driving the bus can make the new Tilray a profitable cannabis company. (EBITDA measures a company's operational performance, whereas true profitability is the total earnings after all deductions are made.) By merging with Aphria, Tilray has equipped itself to both expand and grow.

A steady hand on the wheel

A bigger company has some benefits -- access to a lot of resources, manpower, and capital. But bigger is not always better. A bigger company can also be difficult to manage. It could face complications with cost synergies, hidden inefficiencies, merger costs, and personnel. That's why Irwin's leadership is so important -- we can expect the company to smoothly handle any challenges.

As CEO, Irwin successfully founded and led consumer goods company Hain Celestial Group to success before doing the same for Aphria. Aphria survived and thrived amid a global crisis because of Simon and his leadership team's smart growth strategies of focusing on their core operations and strengthening their brands and balance sheet, rather than spending cash haphazardly on acquisitions. It appears Simon plans to follow the same strategy for new Tilray -- building its existing brands and focusing on its roots in Canada.

A smart buy for the long term

The European cannabis market could grow at a compound annual growth rate of 29.6% to be worth $37 billion by 2027. This could be a lucrative opportunity for Tilray. Simon expects to use Tilray's Portugal facility to help in expanding into the European market. The company holds a cultivation license from the government of Portugal to produce medical marijuana products and export them throughout the continent.

Aphria already has a strong market presence in the medical cannabis business not only in Canada and Europe, but also in Africa, South America, and Oceania. It generates close to 97% of its distribution revenue from its Germany-based subsidiary, CC Pharma.

With prospects of federal legalization in the U.S. also strengthening, the new Tilray could be a strong contender in the U.S. cannabis market five years down the line. In the meantime, the European, international, and Canadian markets can be its revenue growth driver for now. We will know more about the new Tilray's performance and its long-term growth strategies when it reports its next quarterly results. Management expects the merger's operational efficiencies to generate $81 million in annual pre-tax cost-saving synergies within 18 months.

If you have faith in the growth of the marijuana industry, Tilray is a smart buy for the long term. Two strong companies with an expanded international presence, strong balance sheet, growing revenues moving closer to profitability, and a good leadership team are all set to become a cannabis powerhouse. That said, do not expect any short-term gains, as a merger integration takes time. So if you can bear the short-term risks to enjoy fruitful gains in the future, this cannabis stock is for you.