Please ensure Javascript is enabled for purposes of website accessibility
Log In Help Join The Motley Fool
Free Article Join Over 1 Million Premium Members And Get More In-Depth Stock Guidance and Research
By Alex Carchidi - Updated Jun 25, 2021 at 10:24AM

One is a big name in the CBD segment; the other wants to be a big name in cannabis sector financing. But does either belong in your portfolio?

Cannabis stocks have the potential to bring some long-term growth to your portfolio -- but only if you can separate the industry's buds from its all-too-prevalent stems.

Charlotte's Web (CWBHF 16.15%) and Sundial Growers (SNDL -2.94%) are small-cap cannabis companies with unusual business models in the space -- and a shared history of underperformance. Could either of them turn out to be one of those less-common winners in the marijuana sector? 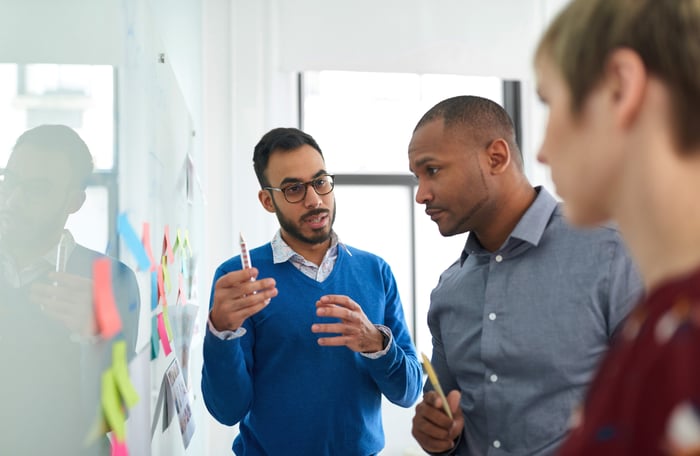 Charlotte's Web focuses solely on cannabidiol (CBD) products such as topical creams, nutritional supplements, and bath, pet, and beauty products, all of which are intended for wellness rather than recreational purposes. Within the CBD segment of the cannabis sector, the company claims to be the leader, boasting the largest market share in the food, drug, mass retail, e-commerce, and specialty retail channels.

In the first quarter, 69.9% of its revenue came from its direct-to-consumer operations, which are growing slightly faster than its business-to-business traffic. Sales were up 9.1% year over year, contributing to its trailing 12-month revenue of $97.17 million. For a market leader, that's not very impressive growth, but a metric like that shouldn't be a deal-breaker for investors either.

Unfortunately, with just over $35 million in cash, $22.4 million in debt, and $104.72 million in operating expenses in 2020, Charlotte's Web doesn't have much room to maneuver, especially considering that it isn't profitable. To address this, the company may have to issue new stock; in fact, it's already taking steps to do so. Investors who buy shares right now are likely to see their equity diluted, and it's entirely possible that it could get diluted again down the road. But management hasn't outlined a clear plan for how the funds from a new stock offering would be used to accelerate the company toward profitability or more rapid growth, so it's hard to have confidence in its future. 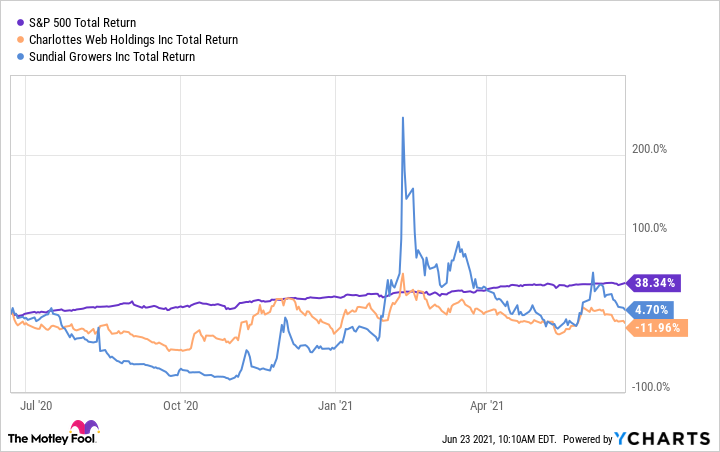 The case for Sundial

Sundial Growers is a (somewhat) more traditional cannabis company that sells marijuana products for medicinal and recreational use in several Canadian markets. Its financial situation is quite different from Charlotte's Web's, though it too is unprofitable. It has more than 1 billion Canadian dollars in cash on the books, and negligible debt. Given that its 2020 operating expenses were only CA$47.4 million, it can keep operating at a loss for a long time before it will need to raise more cash.

Still, the company could have a big problem: In the first quarter, Sundial's gross cannabis revenue shrunk by 30% to CA$11.7 million. The drop is consistent with the downward trend in its quarterly revenue since 2019, which has been occurring in the context of rapidly rising sales of cannabis in Canada. In fact, in March, the country's total cannabis sales grew by 65.1% year over year, continuing the trend from before the pandemic.

Happily for investors, the company's new initiative in investment banking for cannabis companies is already bearing more fruit than its cannabis-selling operations. In Q1, its investments and loans yielded income of CA$15.7 million. If marijuana legalization advances in the U.S. but access to banking is slow to follow, Sundial will be perfectly positioned to grow its investment revenue significantly.

So, if Sundial can make the transition from being primarily a cannabis seller to being more of a cannabis banker, its existing problems with the unprofitability of its cultivation facilities could be smoothed over. On the other hand, the company is diversifying into an area where it has no clear competitive advantage, which could be a risk. Nonetheless, it's hard to find fault with its cash hoard or its lack of debt.

In my view, Sundial Growers is a better cannabis stock because its financial situation is significantly better than that of Charlotte's Web, as is its plan to grow its business. While Charlotte's Web has the benefit of being a capstone player in the CBD space, that position hasn't been clearly useful in terms of allowing it to expand its revenue or reward its shareholders.

Of course, Sundial hasn't consistently delivered for its shareholders either. But its new banking initiative could allow it to make a departure from its past struggles, and it has the potential to be a home run.