Please ensure Javascript is enabled for purposes of website accessibility
Log In Help Join The Motley Fool
Free Article Join Over 1 Million Premium Members And Get More In-Depth Stock Guidance and Research
By Adam Levy - Jun 26, 2021 at 7:15AM

It's been trying for years. Here's what it's doing next.

It's been almost seven years since then-Google CEO Eric Schmidt explained how he sees Amazon (AMZN 0.14%), not another search engine, as Google's biggest competitor. And in those last seven years, the Alphabet (GOOG 0.45%) (GOOGL 0.52%) subsidiary has made quite a few attempts to establish itself in e-commerce, but success has been hard to find.

Google's latest effort to get a bigger foothold in e-commerce is with livestreaming on YouTube, showcased at its "Small Biz Day." But Google faces a lot of competition from platforms like Pinterest and Facebook's (META -0.11%) Instagram as well as up-and-coming shopping services on ByteDance's TikTok. Not to mention, Amazon isn't going anywhere soon. 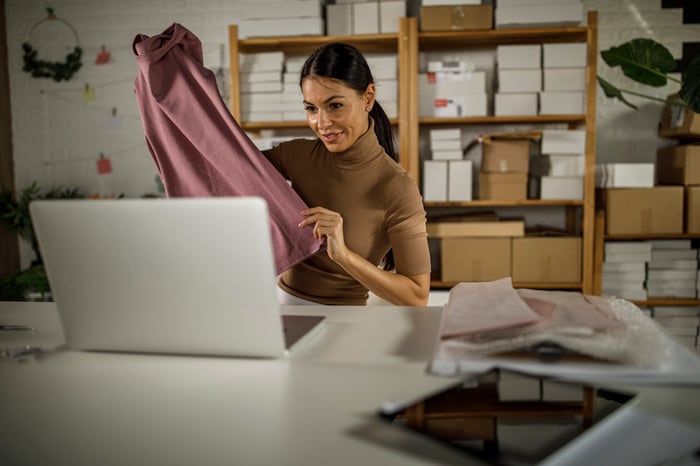 YouTube is building new ways for creators to monetize their content. In February, Chief Product Officer Neal Mohan said YouTube is testing a way for viewers to make purchases directly on YouTube. At the time, his focus was on helping creators monetize their content. YouTube's Small Biz Day aims to turn merchants into content creators and livestreamers to build on YouTube's shopping tools.

This is just the latest effort to facilitate shopping on YouTube. Google partnered with Shopify earlier this year to integrate the e-commerce company's 1.7 million merchants' product catalogs into its websites, including YouTube. Last fall, it started asking creators to tag products in their videos. And it integrated Google Shopping Ads into search results in 2019.

But Google is more confident than ever that it can finally establish a real foothold as a shopping destination. It's seen a substantial increase in viewers coming to YouTube to learn more about a brand or product over the last year, according to Kate Stanford, Google's vice president of ads marketing.

That said, the competition is growing just as fast, if not faster.

Social shopping has been a tough nut to crack, and not just for YouTube.

Pinterest has done well introducing product pins and shopping advertisements and rolling out additional shopping features for its users. CEO Ben Silbermann said about 20% of its ad revenue came from retailers with sales objectives during the first quarter.

But Pinterest is diminutive compared to Facebook and Google. That 20% of ad revenue is less than $100 million for the quarter. That's just a rounding error for its bigger competitors. Facebook and Google are going after a much bigger opportunity.

But advertisers will be looking to diversify away from Amazon, especially as they've started to see average ad prices climb this year. Google wants to seize the next $20 billion in advertising spend currently slated for e-commerce channels, and give merchants an opportunity to make sales on YouTube instead of Amazon. That's easier said than done, and YouTube has no shortage of competition.

But as more shopping moves online, new companies start selling directly to consumers on the internet, and merchants shift their ad spending to keep up with e-commerce sales, the opportunity is growing. Don't expect YouTube (and its competitors) to give up on social shopping anytime soon, as small investments now could turn into billions of ad revenue in just a few years.