The waning pandemic has brought in a new generation of the self-employed: Enter the solo 401(k).

The problem of saving for retirement is often solved by first enrolling in your employer's plan -- typically a standard, pre-tax 401(k). But what if you're now your own employer?

The past year has brought about a great reckoning in how we work, where we work, and perhaps most importantly, why we work. After months of reflection, the workforce has undergone seismic changes. Some workers have rebuked employers offering only minimal wages, and others have opted to work for themselves. Ultimately, people want to have more control over their time and location, so they're able to focus on what really matters to them.

If you're newly self-employed, you might fret about losing access to your former employer's 401(k) plan. Luckily, you're able to open up your own 401(k) if you work for yourself and earn income. Let's take a brief look at the ways in which a solo 401(k) can save -- and even turbocharge -- your retirement goals as a self-employed worker.

As an employee working for a traditional employer, you're allowed to contribute $19,500 to your 401(k) plan in 2021, but you'll have even more room to contribute if you work for yourself.

Remember: When you're self-employed, you function as both the employee and employer. This means, using a solo 401(k) plan, you're eligible to make contributions as both an employer and employee. In 2021, you're able to contribute $19,500 as an employee, and then a maximum of 25% of compensation as the employer -- for a maximum total contribution of $58,000 ($64,500 if you're over 50).

While it may take a bit of time to earn enough on your own to take advantage of the lofty limits, you can truly supercharge your tax-deferred growth if you contribute as much as you can to your solo 401(k). 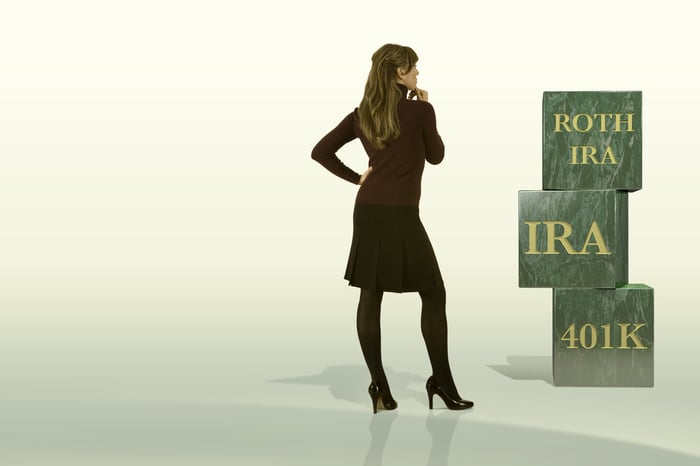 This is primarily meant for higher earners, but there is an interesting subtlety here. Let's say you leave your previous job and still have an old 401(k) with that employer. Most people look to the logical next step, which is rolling their old 401(k) into a pre-tax IRA to take advantage of a wider investment menu and lower fees.

If you roll an old 401(k) into a pre-tax IRA, you'll run into issues if you ever try to move forward with a backdoor Roth IRA contribution. This is because of the lesser-known "pro-rata" rule, which considers all of your pre-tax IRA assets when you convert money from traditional to Roth IRAs. As a result of the rule, you'll pay some amount of tax when you convert any pre-tax IRA money to Roth.

Simply put, utilizing a solo 401(k) allows you to house your old pre-tax IRAs and act as a repository for new retirement savings, all while preserving the backdoor Roth IRA process. From another angle, a solo 401(k) can help keep your pre-tax IRA balances at zero, paving the way for maximum flexibility in savings going forward.

More control in your hands

One of the great benefits of setting up your own 401(k) plan is the amount you'll learn simply by filling out the paperwork. You'll become much more aware of how the plan actually operates and what you can and cannot do. Unlike your traditional employer's plan, you won't have to guess as to the reasoning behind any particular policy, like when the money vests or if you're able to take a loan from the plan.

Some solo 401(k) plans will also allow you to make Roth 401(k) contributions (after-tax), and others will allow you to hold life insurance in the plan. Really, the world is your oyster when you set up the plan yourself. Taking the time to set up a solo 401(k) is also a great signal of independence and demonstrates an ability to exercise control over your own savings.

A little work for a lot of benefit

Opening a solo 401(k) can be a little tedious and does require some paperwork. But in the end, it's absolutely worth the investment of time if you're self-employed and don't have any formal retirement plan set up. Beyond saving in a Roth IRA, self-employed workers need more tax-deferred retirement space. Look no further than the solo 401(k) to make achieving your retirement goals that much easier.