Please ensure Javascript is enabled for purposes of website accessibility
Log In Help Join The Motley Fool
Free Article Join Over 1 Million Premium Members And Get More In-Depth Stock Guidance and Research
By David Jagielski - Jun 29, 2021 at 6:27AM

Tilray is significantly bigger, but is it a better investment?

A good way to maximize your odds of success when investing in the cannabis industry is by buying shares of low-cost producers. Profitability is hard to come by in the sector, especially in the Canadian pot market, where the industry is smaller than in U.S. and there is no shortage of competitors, either. Today, I'll look at two companies that have posted profits recently and are among the safer investments out there: Tilray (TLRY 4.67%) and Village Farms International (VFF 4.22%).

With a market cap of almost $5 billion, Tilray is almost six times the size of Village Farms. And with its recent acquisition of Aphria, it is now the largest cannabis company in Canada. But are you better off going with the big name, or could the much smaller Village Farms lead to better returns for your portfolio? 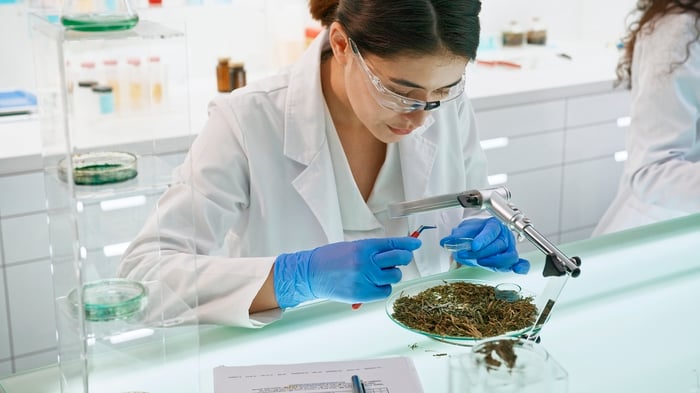 Tilray and Aphria completed their blockbuster merger in May, so there hasn't been an earnings report yet that includes two as one entity just yet. There will probably be challenges as the companies initially integrate their operations, but the combined entity will likely be profitable (on an adjusted EBITDA basis). That's a good thing for investors, because it means there isn't a big risk for dilution if the company can generate cash organically to help fund its future growth.

The main reason I would consider investing in Tilray is for that financial stability, which by default makes it a lot safer than some other pot stocks. Another factor to consider is that Tilray has partnered with Budweiser-maker Anheuser-Busch to launch a joint venture, Fluent, where the companies have worked on developing beverages for the Canadian pot market. While that hasn't amounted to much revenue of late (Tilray's investments in both Fluent and edible company Cannfections have generated just $1.1 million in sales for the first three months of 2021), the potential is there for the long term as the cannabis beverage segment evolves over time -- globally, it could be worth $2.8 billion by 2025. The partnership with Anheuser-Busch also complements Aphria's acquisition of SweetWater Brewing last year.

Over the long haul, there's the potential for Tilray to deliver solid growth. However, it's going to require some patience from investors. In its latest results, for the period ending March 31, the company's sales of $48 million were down 8% year over year. Meanwhile, Aphria's top line in its most recent quarter (ended February 28) came in at 154 million Canadian dollars and was up a modest 6% from the same period last year. Neither company is doing terribly well lately in terms of sales growth, but there is hope that together they can achieve stronger results.

What makes Village Farms an intriguing buy is that while it is smaller in size, it is showing significant potential. In November, the company obtained 100% ownership of the Pure Sunfarms greenhouse, which is a low-cost operation that can make Village Farms competitive with other producers. Previously, Emerald Health also had a stake in the greenhouse.

Pure Sunfarms has a terrific record for profitability -- achieving a positive adjusted EBITDA in every period for 10 straight quarters. And its retail branded sales have been growing at a rate of 20% or better in three straight periods. Its brand of dried flower products has also been a top seller with the Ontario Cannabis Store through the first three months of 2021.

But Village Farm is about more than just cannabis -- the majority of its sales relate to produce, representing double the amount of cannabis-related revenue. Lately that diversification has been doing more harm than good; even though produce sales of $35 million for the period ending March 31 were up 9% year over year, the company blames low prices for a decline in profitability for that segment of its business. Overall, Village Farms' adjusted EBITDA profit of $0.4 million this past quarter was down 63% from the prior-year period. But historically, the company's business has been profitable, posting a positive net income in three of the past four years.

Why I would go with Village Farms

Today, Village Farms stock trades at a price-to-sales (P/S) multiple of under four, while Tilray is over 11. Part of the reason for that discrepancy is that Tilray has been a more popular stock with speculators and retail investors. But for a business that is facing some growth challenges, there isn't a compelling reason to pay such a premium for it.

Neither of these companies have a big outside investor that they can rely on to bankroll their operations and make them an ultra-safe buy over the long term. And both have proven they can generate strong bottom lines in the sector. While Tilray isn't a bad cannabis stock to own, I don't see a reason for it to be worth three times the premium that investors are currently paying for Village Farms, and that's why it is the stock I would buy today.