Please ensure Javascript is enabled for purposes of website accessibility
Log In Help Join The Motley Fool
Free Article Join Over 1 Million Premium Members And Get More In-Depth Stock Guidance and Research
By Alex Carchidi - Jun 30, 2021 at 7:49AM

If it can deliver on its promises of cost savings for its stakeholders, yes.

It might sound strange to hear that traders on Reddit absolutely love the stock of an insurance provider that's focused on administering a formerly obscure type of Medicare plan. And it is, but that hasn't stopped Clover Health Investments (CLOV -1.51%) from becoming a plucky meme stock.

The company's approach to Medicare Advantage plans is to be cheaper for consumers and more profitable for doctors. Medicare Advantage plans, in case you're not familiar, are expanded Medicare plans that offer a wider network and greater coverage of healthcare needs for patients. So far, Clover Health itself hasn't been profitable with this arrangement, but it's growing quarterly revenue at a steady pace of 18% year over year nonetheless.

Will the company be able to grow its way to dominance, or is it on track to remain unprofitable forever? 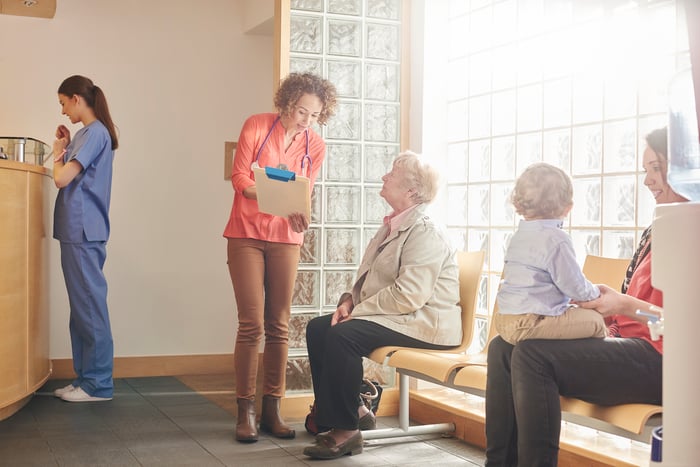 Why it's worth buying

Clover Health might be worth buying because it has a credible claim to disrupting the ossified Medicare Advantage landscape.

Rather than charging customers exorbitant fees in exchange for limited in-network coverage, the company aims to provide dirt-cheap service for access to a large pool of healthcare resources. The company claims that its low-cost pricing for consumers can be as much as 17% cheaper than competing offerings -- and that's with more coverage, too.

Unlike a traditional insurer, it can do this by wooing practitioners into its system with faster payouts, higher-than-average reimbursement rates, and access to Clover's efficiency-increasing software platform for care and billing management, the Clover Assistant.

So, it's important to recognize that its business model relies on being able to give better-than-average deals to both doctors and patients alike. If it can continue to do so without breaking the bank and eventually turn a consistent profit, it'll have a good chance of making investors rich.

By 2025, the company estimates that the total addressable market for Medicare Advantage plans will be valued at around $590 billion per year. Importantly, Clover may have an edge against its competitors when it comes to actually realizing revenue from the addressable market. In the areas where Clover has had more than 500 members since 2014, it has tended to steal market share from the established competition quite steadily over time.

Plans are already in motion to expand into new markets and juice revenue even further. On June 24, the company announced that it would expand its coverage to include 101 additional counties, bringing its total Medicare Advantage geographical footprint to 209 counties spread over nine states. The expansion will pave the way for ongoing growth of its membership base, which should in turn ensure that revenue continues to grow at a steady clip.

Why it's not a slam dunk

Despite its uncanny ability to siphon market share, there are a few issues with Clover Health that should give investors pause.

First and foremost, the company's medical care ratio (MCR) was 107.6% as of its 2021 first-quarter earnings report. In case you're not familiar, MCR is an insurance industry metric that describes the ratio of payouts to providers of medical services to the sum of the fees charged to members. So, Clover Health's MCR of over 100% means that it's losing money because it's consistently paying more for its members' medical procedures than it collects in exchange for coverage.

What's more, Clover's MCR got significantly worse year over year. In Q1 of 2020, it was only 89.4%. That undermines the company's thesis that its technology is an effective way to keep costs low. Management claims that the rise in MCR was caused by the higher costs of caring for people with COVID-19, so investors should pay attention to the next few earnings reports to see if the effect is transitory. In the long run, the company expects to have an MCR of around 83%.

But its business model may need to fundamentally change for that to happen. Remember, Clover can only offer its unique combination of wide and cheap Medicare Advantage coverage by offering a great deal to providers that they can't find elsewhere. And while the Clover Assistant software may be helpful for physicians to cut their costs, the prospect of getting reimbursed more for procedures is probably a much bigger allure. After all, many insurance companies offer software packages to providers to entice them into their network, so it's not much of a bonus.

What this means is that eventually, something will have to give. Either the company will need to raise prices for its customers, or it will need to curb its generous payouts to providers. At that point, either its wide network or its easy access to market share may buckle.

Nonetheless, that's a problem for the future. For the next few years, it's probable that the company will continue to grow its revenue and its membership base. People who invest now will probably come out ahead -- as long as they keep an eye on the looming conflict at the heart of the business.