Please ensure Javascript is enabled for purposes of website accessibility
Log In Help Join The Motley Fool
Free Article Join Over 1 Million Premium Members And Get More In-Depth Stock Guidance and Research
By Jason Hawthorne – Jun 30, 2021 at 9:45AM

To clear the hurdle, the healthcare giant will need to stay richly valued.

Trying to figure out if a company will have a market capitalization of $1 trillion in the next decade is often reserved for fast-growing technology companies looking to become the next Apple, Microsoft, or Facebook. But slow, steady growth from a megacap stock can also achieve that mark.

Johnson & Johnson (JNJ 0.13%) is already an enormous company. And its growth might not be exciting, but its consistency over time can deliver impressive results. The stock is currently worth $432 billion, meaning it only has to do a little more than double its size to reach the magic number. Breaking down each business unit and projecting the profits a decade from now might highlight the path to crossing the $1 trillion threshold. 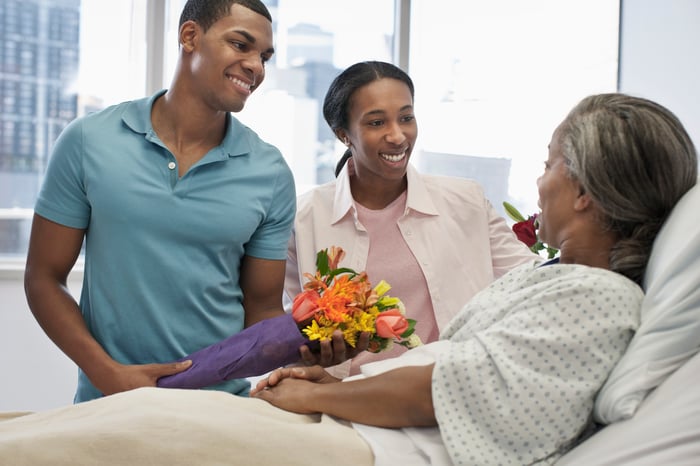 The pharmaceutical segment is the largest and fastest growing of the business units. It brought in $45.6 billion last year and has grown nearly 8% per year since 2015. The company lists 24 drugs that generated more than $400 million in 2020, and 14 that produced more than $1 billion.

Its most successful was Stelara, a treatment for psoriatic arthritis and plaque psoriasis. It made up 9% of the company's 2020 revenue and grew 21% over 2019. Another standout is Darzalex, a drug for multiple myeloma. The $4.2 billion it brought in was up 40% year over year.

That bodes well for continued growth in the segment. If it can keep up the pace, investors might expect $91 billion in revenue in 2030 generating $29.5 billion in pre-tax profit. That means a decade from now the company might make more from drugs than it made in total last year.

Medical devices could add a spark

Johnson & Johnson found tough sledding in 2020 in the medical device business. Sales dropped more than 11%. It's nothing to be ashamed of. Other device makers like Intuitive Surgical, Smith & Nephew, and Stryker all saw sales decline last year as well. Growth had been lackluster even before the pandemic. Over the five prior years, segment sales were flat. Johnson & Johnson has made a few acquisitions to jump-start growth.

In 2019, the company purchased Auris Health. That company has a robotic surgical system focused on the lungs. Management is hoping it can expand to more procedures and compete with the leading surgical robotics companies. Johnson & Johnson also purchased Verb Surgical, its collaboration with Alphabet's life sciences unit Verily. That company's robotics and data science capabilities should add new revenue sources in the years ahead. Giving it credit for modest growth, the unit might generate $33 billion in 2030 sales with nearly $8 billion in pre-tax profit.

Consumer health is an anchor

The company's consumer health business is made up of names familiar to shoppers. Beauty supplies like Aveeno, pain relievers such as Tylenol, and oral care products like Listerine are just a few of the brands that make up its $14.1 billion in annual sales. The segment grew 1.1% year over year in 2020, combining over 7% growth in wound and oral care with roughly 9% drops in baby and women's care. Management blamed the declines on behavior changes during the pandemic.

Overall, the business has grown less than 1% per year over the past half-decade and averaged a pre-tax income margin of 16%. That excludes 2020, when a significant litigation fee skewed results. Doing the math, investors might see $15.3 billion in sales and $2.4 billion in pre-tax income in 2030.

Johnson & Johnson has 28 products that generated more than $1 billion in sales in 2020. That illustrates just how complex the company is. At the risk of oversimplifying, projecting the growth rate a decade into the future and applying historical profit margins can provide a reasonable estimate for what the company might be worth.

Adding it up and applying a conservative corporate tax rate of 15% (it's been 11% per year for a decade) shows an after-tax profit of a little less than $34 billion in 2030. Going one step further, Johnson & Johnson has traded in a price-to-earnings (P/E) range of 15 to 29 during that time. Anyone who guessed that it currently trades for 29 times earnings -- its richest valuation ever, using normalized earnings -- gets extra credit.

Doing that math, the company could reasonably trade between a market cap of $500 billion to $980 billion. It's an absurdly wide range, but it illustrates a key input to any valuation. Depending on how much the market is willing to pay for $1 of earnings, current shareholders might expect a return between 1% and 9% per year over that time. One thing seems certain: To reach $1 trillion, the stock will probably need to have its currently elevated valuation. Whether it remains at these levels for the next decade or experiences a dip in between is anyone's guess.