Please ensure Javascript is enabled for purposes of website accessibility
Log In Help Join The Motley Fool
Free Article Join Over 1 Million Premium Members And Get More In-Depth Stock Guidance and Research
By Scott Levine - Jul 14, 2021 at 11:32AM

This company's performance surprised the market despite the falling price of gold.

Beginning the new year on an inauspicious note, shares of Franco-Nevada (FNV 2.00%) sank nearly 15% through the first two months of 2021. In March, however, investors no longer gave the stock the cold shoulder, and it bounded more than 17% higher.

With the stock receiving favorable coverage from Wall Street and the company reporting strong quarterly results, the gold-focused royalty and streaming business continued to shine brightly in investors' eyes. Shares climbed nearly 16% through the first half of 2021, according to data from S&P Global Market Intelligence. 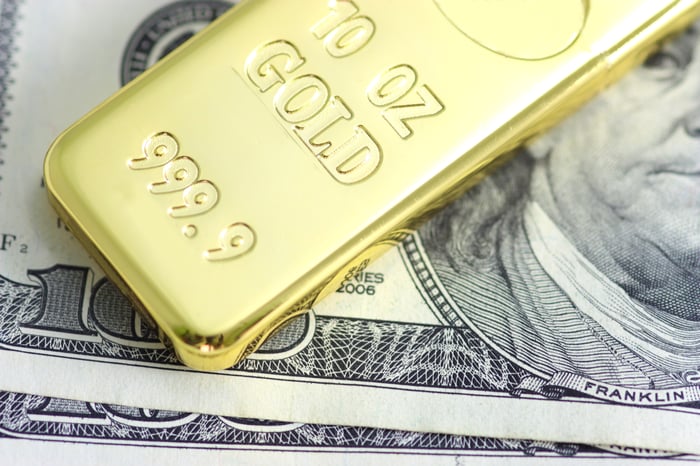 While gold peaked last year at about $2,067 per ounce in August, the price subsequently tumbled steadily. Since gold accounted for 70% of the company's revenue in 2020, it's little surprise that investors sold off shares in the first two months of the year as the price of the precious metal dipped further.

The fourth-quarter 2020 earnings report in March, however, allayed investors' fears about the falling price of gold adversely affecting the company's financials. Breaking several financial records, the company reported revenue of $305 million and net income of $177 million. Besides the strong quarterly results, investors also cheered management's decision to raise the quarterly dividend 15% to $0.30 per share.

Perhaps the most encouraging tidbit, though, was management's outlook for 2021. On the conference call, CEO Paul Brink said, "We expect strong growth in 2021 leading to another record year." 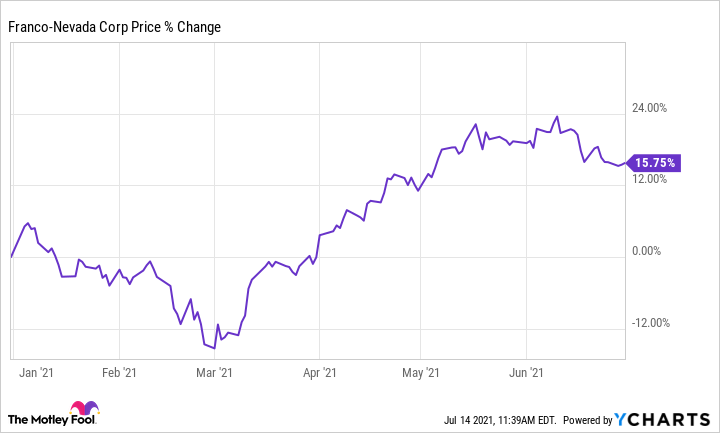 Contributing to investors' glee, Wall Street shared a bullish outlook on the stock in March. BMO Capital upgraded it to outperform from market perform on March 7, and Barclays upgraded it to equal weight from underweight on March 12, according to Thefly.com.

To the delight of investors, the quarterly revenue record that the company set in the fourth quarter of 2020 was short-lived. In May, Franco-Nevada reported first-quarter 2021 revenue of $309 million, a 28% year-over-year increase. And while the $172 million in net income that the company reported wasn't a record, investors were thrilled considering the net loss of $99 million in the year-ago period.

After a strong performance in the first half of the year, Franco-Nevada's stock price continues trending upward, rising more than 3.5% so far in July. As a royalty and streaming company, Franco-Nevada provides a more compelling option for investors to gain gold exposure. And although the stock's rise since the start of the year makes it pricier than where it was last winter, it is well worth the attention of those seeking to invest in the precious metal.