It has been less than a year since NVIDIA (NASDAQ:NVDA) entered the market for data processing units (DPUs), which are chips deployed in data centers for accelerating workloads. The chipmaker has announced an impressive line-up of partners and customers who were either integrating its BlueField-2 DPUs into their infrastructure or have pledged support for them.

In the span of just one year, the adoption of Nvidia's DPUs seems to have taken off remarkably, setting the company on its way to make the most of a market that could be worth billions of dollars. Let's see how the BlueField DPUs could supercharge Nvidia's data center business in the long run. 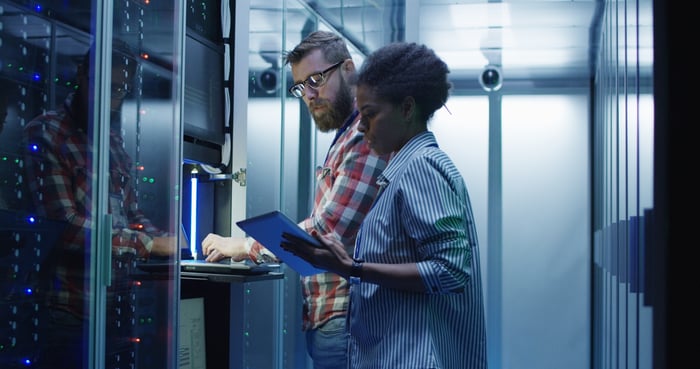 How big is the DPU opportunity?

According to third-party estimates, the global data center accelerator market could be worth $53 billion by 2027 compared to just $4.2 billion last year, clocking a compound annual growth rate (CAGR) of nearly 44%. Graphics processing units (GPUs) and field-programmable gate arrays (FPGAs) are expected to corner almost $39 billion of the overall data center accelerator market, which means that DPUs and central processing units (CPUs) are likely to compete for the remaining opportunity.

Nvidia is already ruling the roost in the data center GPU market, and has designs to enter the CPU space to boost its addressable opportunity. The company's progress in DPUs indicates that it is on track to tap into another fast-growing niche.

Cybersecurity specialist Palo Alto Networks is the latest company to choose Nvidia's DPU to accelerate its offerings. Palo Alto will be using the BlueField-2 chip to achieve a 5x acceleration of its virtual next-generation firewall compared to a legacy system running on a CPU, allowing customers to save 150% in capital expenses. This win could open another attractive opportunity for Nvidia, as the virtual next-generation firewall market is expected to clock a CAGR of 11.9% as per third-party estimates.

Nvidia investors also shouldn't forget that the BlueField-2 DPU has already been deployed in the company's AI-on-5G platform to take advantage of a multibillion-dollar opportunity. Nvidia CFO Colette Kress explained on the May earnings call how DPUs can help it tap the intersection of AI (artificial intelligence) and 5G across several verticals:

The AI on 5G platform leverages the Nvidia Aerial software and the Nvidia Bluefield-2 A100 converged card which combines our GPUs and DPUs. We are teaming with Fujitsu, Google Cloud, Mavenir, Radisys and Wind River in developing solutions based on our AI on 5G platform to speed the creation of smart cities and factories, advanced hospitals and intelligent stores.

It is also worth noting that more server original equipment manufacturers (OEMs) are adding BlueField-2 DPUs to their systems. In May, Nvidia announced that ASUS, Dell Technologies and Supermicro, among others, will release BlueField-2-based systems this year. It wouldn't be surprising to see more server OEMs jump onto the DPU bandwagon, as the chip can reportedly boost a server's performance by 30%.

NVIDIA is pushing the envelope

Nvidia is pushing the envelope in DPU development because of their potential applications in diverse and lucrative niches, as well as their ability to make data centers faster. The company will start sampling the BlueField-3 DPU in the first quarter of 2022.

The chip could quickly gain traction among customers thanks to the impressive performance gains it promises. NVIDIA points out that the BlueField-3 has already garnered support from a bunch of hybrid cloud platform partners such as VMWare, Red Hat, and Canonical.

All of this indicates that NVIDIA is progressing in the right direction in its DPU venture. This bodes well for the company's data center business, which has been on fire in recent quarters. The data center business recorded 79% year-over-year revenue growth in Q1, reaching $2.04 billion. It accounted for 36% of Nvidia's total quarterly revenue of $5.66 billion, which was up 84% year over year thanks to the impressive performance of the data center and video-gaming segments.