Please ensure Javascript is enabled for purposes of website accessibility
Log In Help Join The Motley Fool
Free Article Join Over 1 Million Premium Members And Get More In-Depth Stock Guidance and Research
By Leo Sun - Jul 18, 2021 at 6:35AM

Texas Instruments and two other tech stocks offer an attractive balance of growth, value, and income.

Tech stocks that pay dividends are often overlooked by the market. After all, tech companies usually start paying dividends when they run out of room to expand, and tech investors often favor growth over stability. Income-seeking investors might also flock toward higher yields in other sectors, such as energy, pharmaceutical, and real estate.

Yet there are still plenty of dividend-paying tech stocks which provide a good balance of growth, value, and income. Here are three stocks which check all three boxes: Texas Instruments (TXN -0.33%), Cisco Systems (CSCO -0.81%), and Skyworks Solutions (SWKS -0.76%). 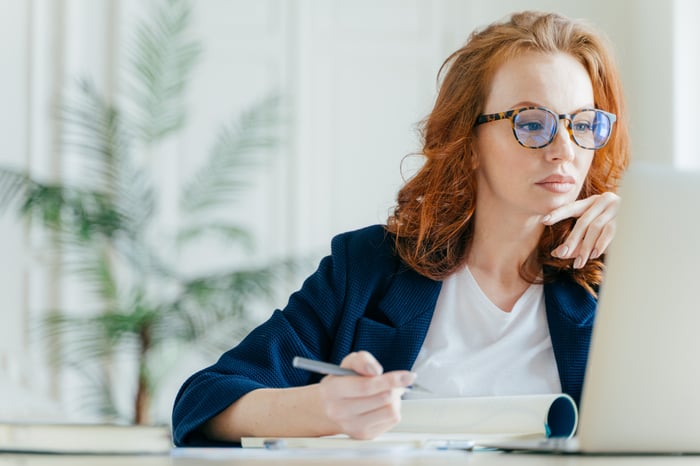 Texas Instruments (TI) manufactures analog and embedded chips for a wide range of industries. These chips already cost less to manufacture than higher-end chips, and TI's transition from 200mm to 300mm wafers over the past few years further reduced its production costs by up to 40%.

Its business model enabled TI to grow its free cash flow at an average rate of 12% annually between 2004 and 2020. Instead of hoarding that cash, TI returned most of it to shareholders via dividends and buybacks. It raised its dividend annually for 17 straight years at a compound annual growth rate (CAGR) of 26% and reduced its share count by 46% during the same period. It currently pays a forward dividend yield of 2.1%.

We shouldn't evaluate TI based on its past performance alone, but its future still seems bright. Its revenue rose less than 1% last year as the pandemic disrupted its auto and industrial markets, but its net income still improved 12% as it expanded its gross margins and reduced its operating costs.

Cisco, the world's largest manufacturer of network routers and switches, suffered a major slowdown over the past two years. The escalating trade war choked off its business in China; it sold less hardware to enterprise and data-center customers; and the pandemic exacerbated that pain.

In fiscal 2020, which ended last July, Cisco's revenue fell 5% as its adjusted earnings per share (EPS), boosted by buybacks, rose 4%. In the first nine months of fiscal 2021, its revenue and adjusted EPS both dipped 1% year over year. Analysts expect its revenue to grow less than 1% this year and its earnings to stay nearly flat.

Those growth rates seem anemic, but Cisco is a cyclical stock, and it's primed to grow again in fiscal 2022 as the pandemic recedes and its customers resume their network upgrades. Its higher-growth security business should also continue to expand amid escalating cyber attacks worldwide. That's why analysts expect its revenue and adjusted earnings to improved 5% and 6%, respectively, next year.

As that turnaround happens, Cisco will continue to reward its investors with consistent dividends and buybacks. It raised its dividend annually for nearly a decade; it currently pays a forward yield of 2.7%; and it spent just 44% of its free cash flow on its dividends over the past 12 months. It also reduced its outstanding shares by 22% over the past ten years.

Cisco generated a total return of more than 370% during that decade, but it still looks cheap at 16 times forward earnings.

Skyworks is often recognized as an Apple (AAPL -0.14%) supplier since it generated over half of its revenues from the iPhone maker last year. But Skyworks also manufactures wireless and radio-frequency chips for a wide range of other industries, and every generational leap in cellular technology -- like the jump from 4G to 5G -- requires more of its chips.

Skyworks' ability to sell more chips in new phones, connected vehicles, smart home devices, and other Internet of Things (IoT) gadgets make it a compelling long-term investment in an increasingly connected world. That's why it generated a whopping total return of nearly 850% over the past decade.

Looking ahead, Skyworks is diversifying away from Apple by developing new chips and making big acquisitions, including its planned purchase of Silicon Laboratories' (SLAB -1.28%) infrastructure and automotive unit.

Skyworks' revenue and earnings both dipped 1% in 2020 as the pandemic disrupted the smartphone and auto markets. It was also forced to abandon Huawei, one of its top customers, amid tighter trade restrictions. But this year, analysts expect its revenue and earnings to jump 49% and 68%, respectively, as the pandemic passes, sales of 5G phones surge, the auto market recovers, and Silicon Laboratories' former unit is integrated into the company.

That growth should cool off next year, but the stock still trades at just 18 times forward earnings, and it pays a forward yield of 1.1%. It raised that payout for seven straight years, and it spent just 28% of its free cash flow on those payments over the past 12 months, which gives it plenty of room for future hikes.