Increasing competition in the hydrogen economy continues to weigh heavily on investors' minds.

Though it might seem that the stock's decline is a reflection of the overall market weakness today, it's far from the only reason for the sell-off in Plug's stock. With Plug Power sharing no news of its own this morning, the stock's decline is likely a reflection of investors' concerns that competition in the hydrogen industry is ramping up as industry stalwarts and an upstart are gaining momentum. 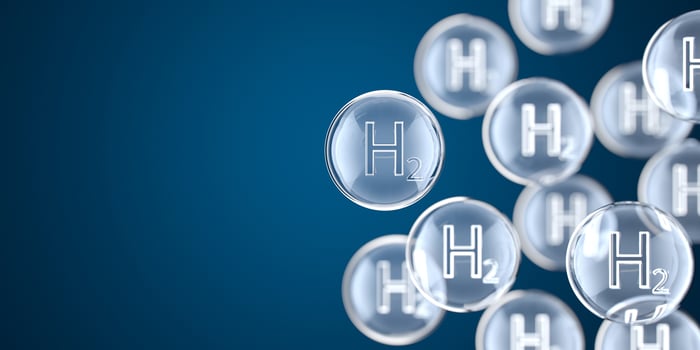 Recognizing the global interest in the hydrogen economy, both energy and industrial titans are endeavoring to grab market share. That's a troubling sign for Plug Power's investors as the stock's meteoric rise over the past year is a reflection of their belief that the company will be at the forefront of the industry's growth.

Last week, for example, GE (GE 0.94%) signed a memorandum of understanding (MoU) with Cricket Valley Energy Center to "develop a green hydrogen technology road map" as well as partner on a project to convert a combined cycle power plant to one that could solely use hydrogen. Should GE become more committed to generating green hydrogen, it could jeopardize Plug Power's ability to achieve its target of generating 1,000 tons daily by 2028.

Besides GE, Linde (LIN -0.09%) also reported news last week that might be shaking the resolve of Plug Power's investors. The company announced the start of operations at a liquid-hydrogen plant in Texas capable of producing 30 tons of hydrogen per day.

The most significant news pressuring Plug Power's stock today, though, might be the debut of Hyzon Motors (NASDAQ:HYZN) stock. After merging with the special purpose acquisition company  Decarbonization Plus Acquisition, Hyzon has become another option for hydrogen and fuel cell investors. And the company is continuing to ink deals. Yesterday, Hyzon announced that it signed an MoU with an Australian manufacturer to develop and supply 20 trash collection vehicles powered by hydrogen fuel cells. Although Plug Power has more extensive experience in providing fuel cells for use in forklifts and similar equipment, the company recognizes the medium- and heavy-duty truck segment as a viable opportunity in the coming years.

Are Plug Power's investors right to run for the exits this morning? Not necessarily. It will be years before GE proves itself to be a formidable player in the green hydrogen industry, and it's unclear how well Hyzon will fare in executing its growth strategy.

Nonetheless, investors should certainly keep close tabs on these -- and similar -- developments, as they could certainly impede Plug Power's long-term growth and further threaten its ability to achieve profitability.

Why Plug Power and Other Alternative Energy Stocks Exploded Today