If warm sand under your toes is your idea of the good life, this could be your ticket.

Most of us have been told "you'd better put money away for retirement." But that doesn't only have to mean saving for the basic necessities -- perhaps you've set up your 401(k) plan to take care of that. There are other reasons to look forward to post-work life, including, say, having your own beach house. And if you're 35 years old or younger (and willing to be patient), you could be closer to that reality than you think.

A $10,000 investment could be worth $500,000 in 30 years with this one exchange-traded fund (ETF), which operates in a growing medical market that offers game-changing innovations in artificial intelligence, robotics, and analysis. BlackRock's iShares U.S. Medical Devices ETF (IHI 3.17%) lists leading medical device companies such as Abbott Laboratories, Medtronic, and Intuitive Surgical among its top 10 holdings. 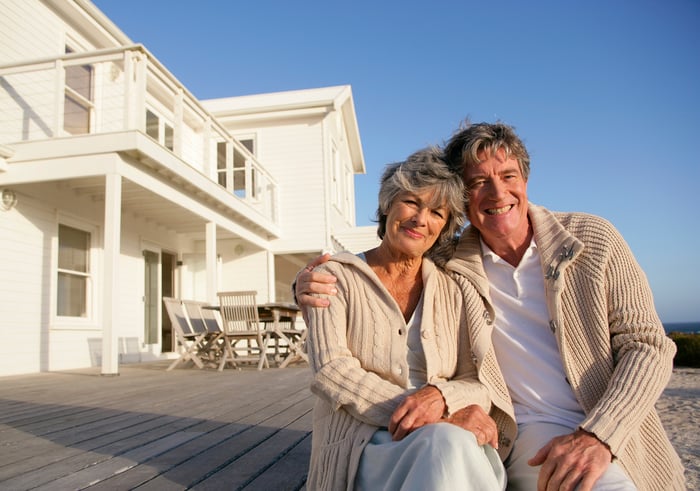 On June 29, the ETF announced a 6-for-1 share split, meaning that for every one share previously held by investors, they will now hold six shares at a per-share price equal to one-sixth the previous share price. The effective date for the split distribution was July 19.

For those who may not be familiar with share splits, the value of your portfolio holdings doesn't change and neither does the total value of the ETF's shares -- but the price of each individual share does change. See the example below, showing the share price before and after the effective distribution date:

The reasons for share splits can vary, but oftentimes are related to "price discovery." This occurs when the per-share price starts to escalate to a number that management thinks is a bit pricey for smaller investors. This rising price can also send a signal to the market that the shares are valuable and performing well, with a bright future. When a split is announced, smaller investors are provided with more of an opportunity to jump in.

Some companies see a share-price jump just before the split as shares are bought up by those who anticipate another price increase afterward. Such an increase can often occur thanks to purchases made by smaller investors now able to get in.

The performance of the iShares U.S. Medical Devices ETF has been nothing short of spectacular over the life of the fund. Dating back to its inception in 2006, the average annual return is over 14%, and if you look at the average over the past 10 years, that rate jumps to 19%. By comparison, the S&P Composite 1500 Health Care benchmark is up 12% since 2006, while the market benchmark is 7.2% -- half that of the iShares U.S. Medical Devices ETF.

The worldwide healthcare market is expected to grow by 8% per year through 2027, helped along by an aging population; the number of people over 65 years of age is expected to increase from 800,000 now to 1.5 billion by 2050. Leading the way in all this growth is the medtech sector, which is the primary focus of many of the ETF's holdings, including the aforementioned Medtronic and Intuitive Surgical.

With a performance history going back more than 15 years and a focus on a current market with an anticipated growth rate near 10%, there's little to doubt about this fund. Thirty years from now, if you're sitting in a beach house enjoying full retirement, you might be able to thank your investment in the one healthcare ETF proven to strengthen your portfolio.

When the Market Recovers, You'll Want to Own These 2 Healthcare ETFs

Why Novocure, Insulet, and Dexcom Are Rising Today

How to Invest in Medical Device Stocks
349%