Apple (NASDAQ:AAPL) reported blockbuster earnings results for its fiscal third quarter earlier this week, including a whopping 50% jump in iPhone revenue to $39.6 billion. The services segment continues its march into record territory, generating $17.5 billion in sales. Investors largely shrugged off the results, instead focusing on cautious commentary from management regarding next quarter. 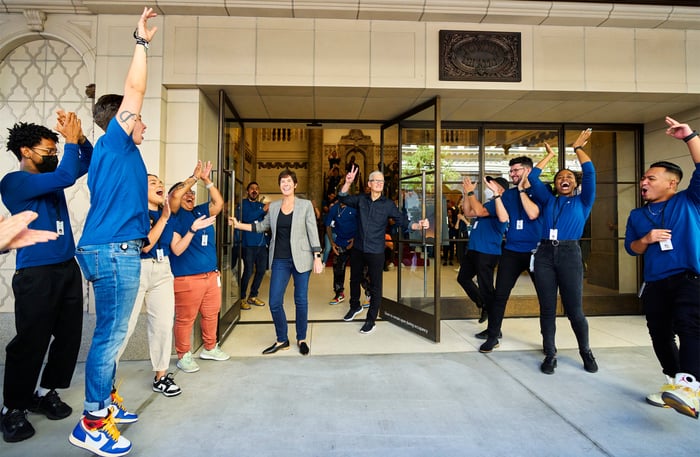 The chip shortage will get worse

The semiconductor industry has struggled to keep up with demand, leading to widespread shortages that have been impacting countless other sectors throughout 2021. CFO Luca Maestri warned that component shortages would get worse in the fiscal fourth quarter.

"The constraints will primarily impact iPhone and iPad," according to Maestri. CEO Tim Cook declined to predict how the shortage situation may unfold later in the year. Apple's M1 chip is suffering from bottlenecks, hindering the company's ability to sell Macs and iPads powered by the processor.

The total is "nearly four times the number of paid subscriptions we had only four years ago," said Maestri.

Apple One is a hit

Launched late last year, the Apple One bundle of services is resonating with consumers, allowing users to experience services that they might not otherwise choose. The chief executive teased that Apple One could serve as a gateway for more services in the pipeline.

And so we really put the customer at the center of that and have recently began to remind people about Apple One in a way that we probably waited a few months before doing that. And so I'm very pleased with what we're seeing on Apple One right now and think it's a great ramp for the future of services. And more importantly, it's a great customer benefit because many of our customers like to try out more than one of these services, and it allows them to do that with one easy bundle and subscription service.

Following some weakness in China in 2019 and COVID-19 impacts in 2020, Apple's business in Greater China is roaring back. Revenue in the Middle Kingdom skyrocketed by 58% last quarter to $14.8 billion. Cook noted that China's economy has "bounced back" quickly from the pandemic, as China implemented drastic lockdown measures in its fight against the virus.

Each major product category is seeing record levels of demand and revenue in China, including wearables and Macs. Apple is also expanding its user base, with two-thirds of Mac and iPad customers being completely new to the platform. An impressive 85% of Apple Watch buyers were also first-time buyers of the smartwatch, Cook said.