Shares of Doximity (NYSE:DOCS) went public last month and quickly became one of the healthcare sector's hot new stocks this year. The company aims to make the lives of physicians easier and improve efficiency, allowing them to collaborate and stay up to date with news and research. The company is also in the telehealth business, giving doctors access to video dialers that allow them to easily contact their patients.

Healthcare innovation has been a popular investing trend recently, especially during the coronavirus pandemic when there was a need for more creative solutions for people stuck at home. Doximity has benefited from this trend, rising 15% in value since its IPO against the S&P 500's 4%. Calling it "LinkedIn for Doctors," many investors are bullish on the company's future given its impressive results and growth rate. But is the stock, which is close to an $11 billion valuation, already overpriced? Or is Doximity the real deal, and the next big growth stock to add to your portfolio? 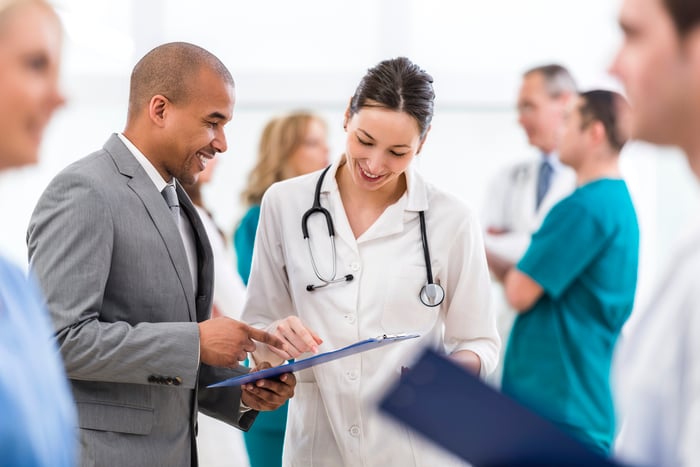 There are similarities, but this is no LinkedIn

Comparing Doximity with LinkedIn makes the healthcare stock sound great, but it's not an accurate comparison. While Doximity is in the networking business, it serves more of a niche market than LinkedIn and still has lots to prove. LinkedIn, meanwhile, was acquired by tech giant Microsoft in 2016 for more than $26 billion. Today, the site has over 750 million members spread across 200-plus countries.

With just 1.8 million members, Doximity isn't even in the same ballpark as LinkedIn -- though that isn't surprising given that it targets doctors rather than the entire working population. But although its member count is less than 1% of LinkedIn's, its $11 billion valuation is more than 40% of what Microsoft paid for the networking company five years ago. Valuations have gone up since then and LinkedIn would likely fetch a higher price tag today, but there's no denying that investors are paying a lofty premium here.

The stock is trading at more than 50 times its revenue

In its most recent fiscal year for the period ending March 31, Doximity's revenue of $207 million was up an impressive 78% year over year. The year before that, its revenue grew by 36%. But at its current market cap, the stock is trading at a price-to-sales (P/S) multiple of 52. The average stock in the Health Care Select Sector SPDR Fund trades at just less than twice its trailing revenue. Even if you compare it with health technology company Veeva Systems and its P/S ratio of 34, Doximity's valuation still looks steep.

Investors are often willing to pay a premium for growth. Ultimately, that's the question they need to ask themselves here -- whether the growth opportunities ahead of Doximity are enough to justify its valuation. The company's growth rate last year was impressive, and a net revenue retention rate of 153% shows that customers (mainly pharmaceutical manufacturers and healthcare systems, as doctors themselves don't pay for membership) are spending more money with Doximity and adding on to their subscriptions. That's a great sign that they are happy with the service. If the company can continue to build on these numbers, that will make it a better buy.

Doximity also launched its telehealth business for enterprises last year, and the company's virtual visits last fiscal year topped 63 million. It's a startlingly high number given that Teladoc Health, one of the top telehealth companies, reported fewer than 11 million telehealth visits in 2020. And during that time, Teladoc's sales came in at just under $1.1 billion. With that kind of discrepancy, it certainly looks like Doximity should be a bargain given all those visits and its dominance in that area.

However, investors should be careful not to assume this is an apples-to-apples comparison. Doximity offers physicians a video dialer that allows them to quickly connect with patients, and this could easily inflate the total number of visits. These could be quick calls that may not necessarily constitute what Teladoc considers to be a visit. If Doximity is delivering nearly six times more telehealth visits than Teladoc and posting a fraction of the sales revenue, I'd have concerns that the company was giving away the business. But Doximity's profit of $50 million last fiscal year (24% of its top line) has me thinking this isn't the case, and that in fact the comparisons may not be all that reliable. Investors should be careful not to make too much of this initially startling number of video visits.

Should you invest in Doximity?

Doximity's numbers look promising, but I still wouldn't buy the stock today. Its valuation is incredibly high, and its growth last fiscal year was likely better than typical given the pandemic and a greater reliance on remote care. Growth was less impressive in the previous year, and I'd be hesitant to assume Doximity will increase its revenue by anywhere near 70% this year -- and you would probably need to expect that to think that the stock is a good buy at its current price.