Add them up and you get a revolutionary company that's priced for perfection.

It's a classic story of innovation and success. The stock is up 1,670% since the first coronavirus cases were reported in the U.S. But investing is about the future, and those in the know point to three things that could drive returns moving forward. 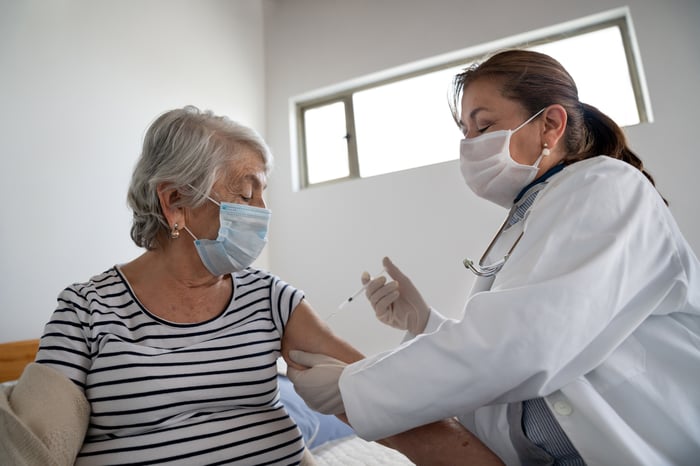 1. Uncertainty over the company's platform is gone

Moderna debuted in 2018 with the most lucrative initial public offering in biotech history. It raised more than $600 million and was valued at about $7.5 billion. To that point, the company had existed for eight years and burned through $1.4 billion with no products to show for it. Unlike other biotech companies, Moderna was touting a drug development platform -- using messenger RNA (mRNA) to deliver protein-making instructions to cells -- rather than any individual therapy. For those who believed, the opportunity wasn't just treating a particular disease -- it was treating disease in general. Still, burning through all of that cash with nothing to show for it raised a lot of questions. The pandemic gave it a chance to answer them.

Scientists in China published the genome of the SARS-CoV-2 virus on Jan. 11, 2020. Two days later, the National Institutes of Health and Moderna had developed several vaccine candidates. By Feb. 24, one was being tested. Less than a month later it was being administered to volunteers. In November, the vaccine was granted emergency use authorization by the U.S. Food and Drug Administration. Against that initial strain of the virus, the company's mRNA-1273 demonstrated 94.5% efficacy. The questions have been answered.

2. Its revenue opportunity is getting squeezed

As you would expect, developing a vaccine to curb a global pandemic brought a financial windfall. Management expects to deliver between 800 million and 1 billion doses this year. It has purchase agreements that account for $19.2 billion in sales. It's the type of blockbuster investors dream about. But the opportunity is shrinking.

While many Americans remain hesitant to get vaccinated, almost 70% have received at least one shot. Daily inoculations have fallen dramatically since an April peak of 3.4 million per day. Although fear of the delta variant has motivated a few holdouts, the numbers are still low. The current seven-day average of vaccinations is about 615,000.

Although CEO Stéphane Bancel has said the market for booster shots keeps getting bigger, the Centers for Disease Control and Prevention (CDC) seems to disagree. It has said vaccinated individuals do not need a booster shot -- yet. The agency has acknowledged immunity drops over time. Still, it's unclear how large the booster shot market will be. Add in potential competition from the likes of Novavax (NVAX -1.96%), Ocugen (OCGN 5.92%), and others, and the picture gets even hazier.

3. The stock is priced for perfection

Even the most optimistic analysts think the company will generate only about $21 billion in revenue this year. Although there is plenty of opportunity left around the globe, countries like China, India, and Brazil have been administering other vaccines. That said, China has praised the mRNA technology and India authorized the import of Moderna's vaccine in June. Those aren't likely to move the needle.

Its current $138 billion market cap puts Moderna at a price-to-sales (P/S) ratio near 7. That's in line with Regeneron and Vertex Pharmaceuticals, two companies with proven drug portfolios and consistent revenue. Its next commercial product will be a vaccine for cytomegalovirus (CMV). It's in phase 2 trials, meaning a drug likely won't hit the market until late 2022 if everything goes well.

Even then, the CEO's optimistic assessment is for $2 billion to $5 billion annually. Analysts peg the number closer to $1.1 billion. Neither estimate is anywhere near enough to replace the sales of mRNA-1273. Longer term, analysts think the opportunity for COVID vaccine boosters could be in the low single-digit billions. That means that in a relatively optimistic scenario -- where CMV gets approved and boosters are persistent for some -- the company could be looking at revenue dropping by up to 75% post-pandemic.

Moderna has proven its mRNA platform can be rapidly deployed to develop a drug. The efficacy and safety of its COVID vaccine are remarkable, and the company is reaping the rewards of its innovation and execution. However, it's hard to come up with a scenario where its current valuation is justified without a serious setback related to the pandemic. Over the long term, the company's gene-based drugs could transform what we think of as medicine. But over the next few years, the stock looks vulnerable unless management can deliver another blockbuster drug to fill the void as vaccinations wane.