A neuroscience team at Facebook (NASDAQ:FB) recently restored a stroke victim's ability to speak using a brain-computer interface headset. The person simply attempted to speak, and the interface translated the brain's intentions into words -- for the first time in history. Shortly after the research concluded, Facebook announced in a press release that the team is refocusing its efforts away from the technology, but it will open-source the software and hardware for outside development.

Now, Facebook's neuroscientists are shifting their attention to wrist-based neural interfaces (in other words, a bracelet that can read your nerve signals) for use in VR and AR. Even if there is a shorter path to market for a wrist-wearable neural interface than a headset, convincing consumers to actually buy the product from Facebook in particular will be a challenge. But the company can't fulfill its metaverse vision without bringing wearable interfaces to mass market. 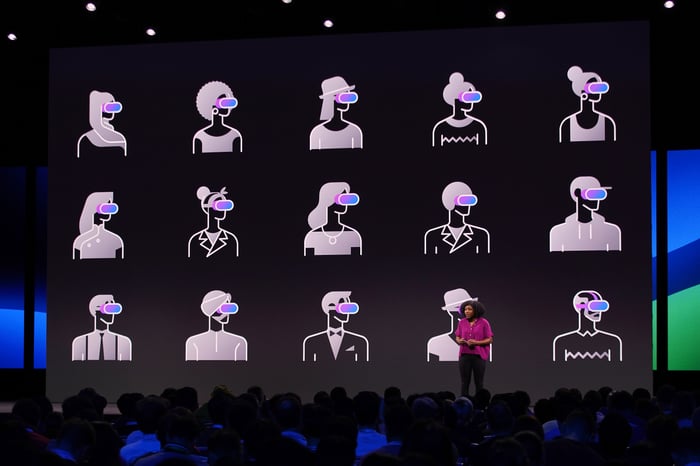 Wearables are a piece of Facebook's metaverse puzzle

Facebook's vision for the metaverse consists of interactive, shared digital worlds and can be thought of as an "embodied internet." Facebook is such a big believer that it aims to be known as a metaverse company in the long run, not a social network, according to a Verge interview of Mark Zuckerberg.

Andrew Bosworth, Facebook's vice president of AR and VR, announced in a Facebook post that the company will form a new executive team dedicated to building the metaverse. According to Bosworth, before it can fulfill its metaverse vision, Facebook needs to "build the connective tissue" between the digital and physical worlds in order to remove the limitations of physics and move through the digital worlds with ease.

Facebook clearly plans for this connective tissue to be wearable interfaces, whether on the head, wrist, or otherwise -- in the company's press release regarding its refocused priorities in neural interface development, it specified that its wrist-based interfaces are intended to be used for intuitive AR/VR input. Therefore, while the company's brain-computer interface was developed with a long-term mindset, its wrist-based interface is being built directly for the consumer.

Facebook's single barrier to success in the metaverse: Trust

Facebook is ahead of the game in AR/VR tech, and its development of wearable neural interfaces is nothing short of cutting edge. That doesn't necessarily mean consumers are ready to open their wallets and put a Facebook machine on their heads.

In Business Insider's most recent Digital Trust Survey, Facebook ranked last place among the nine largest U.S. social media platforms in perceived digital data privacy. Even more discouraging for Facebook's metaverse aspirations was a more specific recent survey of over 2,000 U.S. adults by Morning Brew and Harris Poll, which found that consumers would rather buy AR/VR devices from Apple, Google, Samsung, Amazon, or Microsoft than Facebook.

Considering this consumer sentiment, taking a brain-machine interface to market is an extremely risky concept for the company -- at least for now. The company's wrist-based interface is a better fit to be used alongside its Oculus VR headsets and possibly even AR glasses (which are currently in development under the name Project Aria) as an introduction to the metaverse.

Facebook is a powerful growth stock with unmatched network effects and cutting-edge technology, making it a solid long-term investment for a number of reasons. That said, all companies have weaknesses. Facebook's weakness is public image, and this could slow or prevent the company from rolling out the technology it develops. The longer it takes for the public to adopt its metaverse-enabling technology, the easier it will be for big-tech competitors to beat Facebook to the punch.

One way Facebook could navigate negative consumer sentiment in the short term is by leaning into the Oculus brand instead of the Facebook brand for its metaverse-related hardware -- this would include, but not be limited to, not requiring a Facebook account login to access the metaverse through its Oculus devices. Brand is important when a product hits the mass market, and many consumers would have an easier time adopting Oculus hardware and interacting with Oculus digital worlds than with the same products from Facebook.

While most tech-savvy investors immediately associate the Oculus brand with Facebook, many consumers would not -- a 2019 study by Pew Research revealed that only 29% of Americans could identify that WhatsApp and Instagram are owned by Facebook, several years after the acquisitions were completed.

In the long term, Facebook must regain public trust the right way -- by improving users' ability to control their data collection settings, educating users about how and why their data is collected, and working to avoid data leaks and unethical data harvesting, like the infamous Cambridge Analytica political scandal, at all costs. Otherwise, its reputation will stand firmly between its metaverse technology and the public.