Just one day removed from falling sharply, the Dow Jones Industrial Average (^DJI) is back in positive territory, up 194.6 points at 1:44 p.m. EDT on August 5. This gain follows the release of two economic updates that are favorable for a continued economic recovery. The U.S. Labor Department released its weekly jobless claims report, with the number falling slightly from the prior week, while the U.S. Department of Commerce released the monthly international trade report, with the trade deficit widening in June, another data point supporting a strong economic recovery. 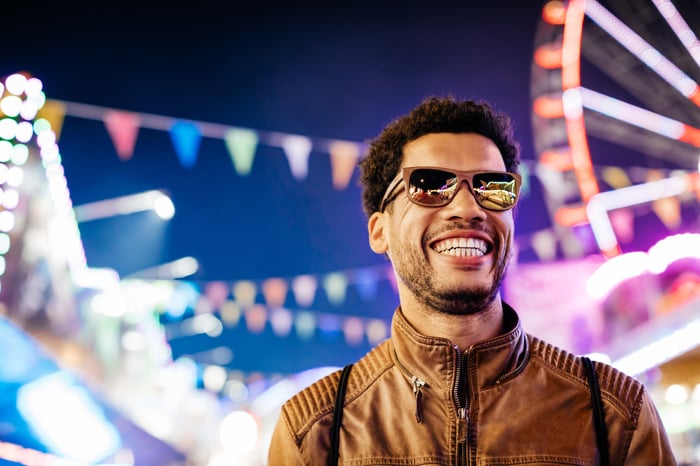 This week's initial jobless claims report from the Department of Labor came in at a seasonally adjusted 385,000, down 14,000 from the prior week's report and a continuation of the steady trend lower. This is another positive data point that supports the prospects for a continued economic recovery, even as the Delta variant of the coronavirus continues to spread, leading to increased hospitalizations and a return to practices intended to slow the spread, like masking (in some parts of the country) and social distancing. 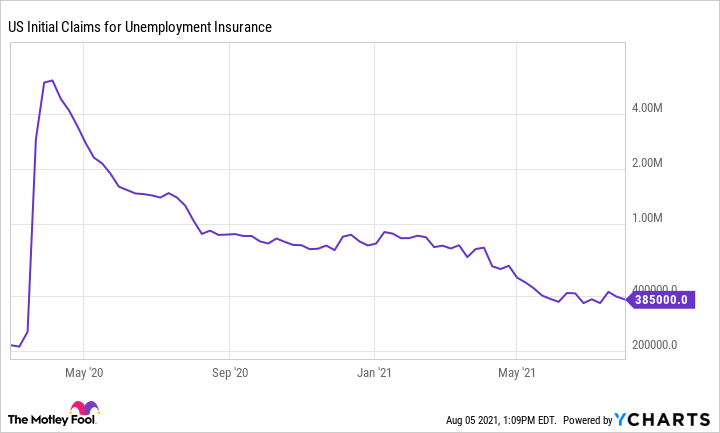 The Delta strain still represents a threat to the economy as it could reduce people's desire for social and in-person activities. But the data so far says it hasn't stopped the economic recovery, though it may be slowing it down as cases spread. At the same time, vaccination rates have begun to accelerate as more people who've put off the vaccine realize the serious risks COVID-19 represents.

Nonetheless, fewer people filing for unemployment means the workforce is stabilizing, a positive for Salesforce, which provides cloud-based software and other software-as-a-service (SaaS) tools to enterprises. Simply put, the more people return to the labor force, the more companies will rely on Salesforce's tools.

It's also a positive for Disney because more people in the workforce should also mean more people with disposable income to spend on entertainment. Management clearly thinks it's time to accelerate its focus on its in-person business even as it takes steps to help keep visitors and employees safer.

On August 4, Disney announced a new annual pass program  --Magic Keys -- for its Disneyland parks in Southern California. The program offers multiple price tiers from as much as $1,399 per person to $399 per person (for Southern California residents). The higher the tier, the more reservations you can make and the larger the discounts. The program also offers discounted parking, merchandise, and dining.

Widening trade deficit a positive for the economic recovery

The Department of Commerce released its June update on the state of international trade, with the trade deficit up almost $5 billion from the prior month to $75.7 billion. That's the highest on record and higher than expected. Simply put, Americans are spending money at a record clip after last year's lockdowns.

Despite the ongoing challenges with the global supply chain that's hindering sales of automobiles and other products that use semiconductors, global trade is alive and well, and American consumers are paying up for imports.

Walmart continues to win with consumers, too. Stronger employment data and the widening trade deficit both support the company's ability to continue growing sales. Over the past several years, the retail giant has invested billions of dollars to grow its e-commerce business, expand into more healthcare offerings, and otherwise "be the best first place people shop," as CEO Doug McMillon put it last quarter.

The big question investors want to see answered: Will the strong economic recovery continue as we move deeper into the second half of the year? There's still a lot of room to run, with jobless claims well above historical rates and many industries far from fully recovered. Yet even within that uncertainty, investors seem optimistic, with these three stocks all within 15% of their all-time highs and the Dow Jones only down about 0.5% from a new record.

Disney's Surprise Move Tries to Give the Dow a Lift

Disney's Down, but This Stock's Having Its Day in the Sun

3 Unstoppable Investments Everyone Needs in Their Portfolio
366%