The drugmaker had a double whammy of bad news.

Shares of Bluebird Bio (BLUE -2.90%) were crashing 23.3% lower as of 12:18 p.m. EDT on Monday. The big decline came after the company announced two negative developments in its second-quarter update.

Bluebird said that the U.S. Food and Drug Administration (FDA) has placed a phase 3 study featuring eli-cel (also known as Lenti-D) on clinical hold. The company also stated that it plans to focus only on the U.S. market with its severe genetic disease products and pull out of the European market.

With Bluebird's double whammy this morning, it's not surprising that the biotech stock tanked. But just how bad is the news for the company? 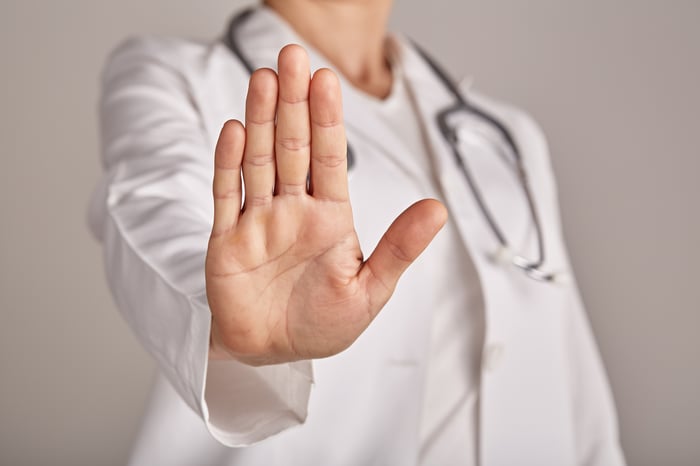 The FDA clinical hold for eli-cel affects only the phase 3 study targeting cerebral adrenoleukodystrophy (CALD). Bluebird doesn't expect this clinical hold to spill over to its studies of eli-cel that target other indications such as beta-thalassemia, sickle cell disease, or cancer.

One patient who was treated with eli-cel over a year ago in the late-stage ALD-104 clinical trial reported a serious adverse reaction. Bluebird didn't provide much detail on this reaction but did state that the evidence points to its Lenti-D lentiviral vector as a potential contributing factor.

The company's decision to focus only on the U.S. was a direct result of its uphill battle securing market access and the pricing it wanted for Zynteglo in Europe. Andrew Obenshain, president of Bluebird's severe genetic diseases business, said, "While European regulators have been innovative partners in supporting accelerated regulatory paths for these therapies, European payers have not yet evolved their approach to gene therapy in a way that can recognize the innovation and the expected life-long benefit of these products."

The U.S. certainly presents a larger market opportunity for Bluebird. However, the failure to gain traction in Europe is still a big blow that limits the company's growth prospects.

Bluebird intends to work with regulators with the goal to have the clinical hold for eli-cel lifted as soon as possible. The biotech company still thinks that it will be able to complete the U.S. regulatory submissions for the drug in treating beta-thalassemia and CALD this year.