The answer ultimately depends on whether the uncertainty plaguing JAK inhibitors resolves positively.

Earlier this month, Pfizer (PFE 1.29%) announced promising top-line phase 2b/3 results in a study testing its JAK inhibitor ritlecitinib for treatment of alopecia areata, which suggests the drug could eventually be approved for the treatment of this autoimmune disease that causes hair loss.

But as fellow Fool Jeff Little noted in June, "The FDA has recently placed increased focus on the potential side effects of JAK inhibitors ..., which belong to a family of treatments called DMARDs (disease-modifying antirheumatic drugs)." Let's take a look at the results of the study, what the FDA's concerns mean for this drug and others like it, and whether pharmaceutical giant Pfizer has a chance at making its mark in the growing global alopecia drug market. 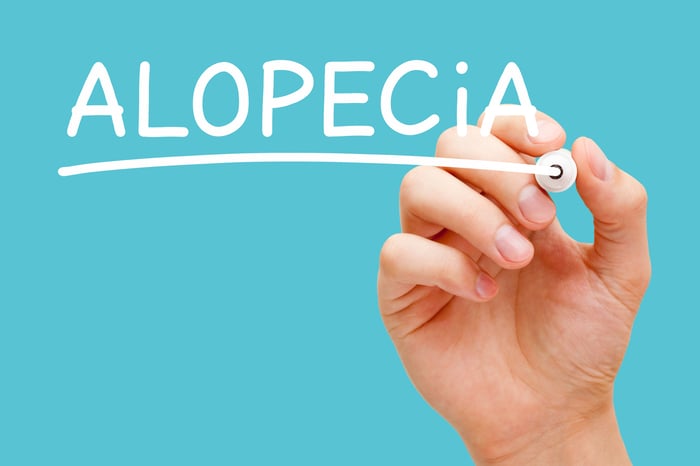 Pfizer's phase 2b/3 study of ritlecitinib investigated the impact of the drug in treating alopecia areata in a randomized clinical trial of 719 patients. These patients were aged 12 years and older, had 50% or more hair loss of the scalp (as measured by the Severity of Alopecia Tool, or SALT, score), and had experienced a current episode lasting between six months and 10 years.

Pfizer noted that a clinically significant portion of patients who received either 30 mg or 50 mg of ritlecitinib daily were found to have achieved a SALT score of less than 20% scalp hair loss after 24 weeks of treatment compared with a placebo, meeting the study's primary efficacy endpoint of improving scalp hair regrowth.

The science behind ritlecitinib is that the drug stops the body's immune system from attacking hair follicles, which is what is thought to contribute to hair loss in patients with alopecia areata, according to Pfizer.

Ritlecitinib will need to overcome scrutiny toward JAK inhibitors

Despite the encouraging results of the study, it's worth noting that ritlecitinib's path to U.S. Food and Drug Administration (FDA) approval for the alopecia areata indication (or its vitiligo, rheumatoid arthritis, Crohn's disease, and ulcerative colitis indications, for that matter) will be even more scrutinized than is usual, because of its particular drug class.

Ritlecitinib is a member of the Janus kinase inhibitor, or JAK inhibitor, class of drugs, which has recently come under the FDA's scrutiny. According to Fierce Pharma, the post-marketing study of Pfizer's JAK inhibitor Xeljanz uncovered serious heart side effects and cancer, when the study's results were announced in late-January. This prompted the FDA to delay potential JAK inhibitor approvals back in February as the agency investigates further.

Even though there were no major adverse cardiac events or deaths reported in Pfizer's study of ritlecitinib, the drug is a member of this class of medication. As a result, there is a great deal of uncertainty surrounding ritlecitinib's future.

Ritlecitinib could be a nice boost to future revenue

If the JAK inhibitor class is able to ultimately withstand the added regulatory attention and ritlecitinib's efficacy in safely treating alopecia areata holds up, the drug could provide a solid revenue stream for Pfizer.

In support of this thesis, let's take a look at the global alopecia market and the growth forecast.

Pointing to the "increasing prevalence of hair loss" as well as "technological advances in alopecia treatment," Grand View Research estimates that the global overall alopecia market will grow by 8.1% annually from $7.6 billion in revenue in 2020 to $14.2 billion by 2028.

Assuming that the alopecia areata market holds steady at 35.2% of the overall global alopecia market, as was the case in 2020, Pfizer's total addressable market in this space would be $5 billion by 2028.

Given that Pfizer is likely to face competition from Concert Pharmaceuticals' JAK inhibitor, CTP-543 (phase 3 topline results aren't expected until 2022), and from Eli Lilly and Incyte's JAK inhibitor, baricitinib (currently awaiting an FDA decision), upon entering the alopecia areata market, I believe that a fragmented 15% market share is realistic.

This would translate into $750 million in annual revenue related to an alopecia areata indication by 2028, which is approximately 1% of Pfizer's 2021 revenue guidance of $78 billion-$80 billion.

Pfizer has numerous paths to growth

With questions looming over whether JAK inhibitors such as ritlecitinib will be able to secure regulatory approvals in the future, it's worth mentioning that Pfizer doesn't necessarily need such an approval to increase revenue in the years ahead.

In addition to its BNT162b2 COVID-19 vaccine developed with Germany's BioNTech, Pfizer also anticipates that it could file for Emergency Use Authorization by the fourth quarter of this year for its oral COVID-19 antiviral, known as PF-07321332. Fellow Fool Keith Speights believes this could be a blockbuster in its own right given the huge addressable market, especially considering that Pfizer wouldn't have to split its profits on the oral therapy as it does with BioNTech for BNT162b2.

Outside of COVID-19, Pfizer's oncology biosimilars (Ruxience, Zirabev, and Retacrit) tripled their combined sales from $107 million in Q2 2020 to $352 million in Q2 2021, which is another nice growth catalyst for the company going forward.

Nearly half of Pfizer's forecasted sales this year will come from the $33.5 billion in revenue the company is expecting from its BNT162b2 COVID-19 vaccine (after splitting revenue with its partner, BioNTech). This is based on the 2.1 billion doses that the company estimates will be delivered this year.