Could this be the world's first trillion-dollar contract chipmaker?

Taiwan Semiconductor Manufacturing Company (TSMC) (TSM -0.14%) is the world's largest and most advanced contract chipmaker. Many leading "fabless" chipmakers -- including AMD, Qualcomm, and Apple -- rely on TSMC to manufacture their smallest and most powerful chips.

Thanks to the market's growing appetite for new chips, TSMC's revenue has surged over the past few years, and its stock hit an all-time high this February. The stock has advanced more than 300% over the past five years -- but it could climb even higher as the global chip shortage generates fresh tailwinds. 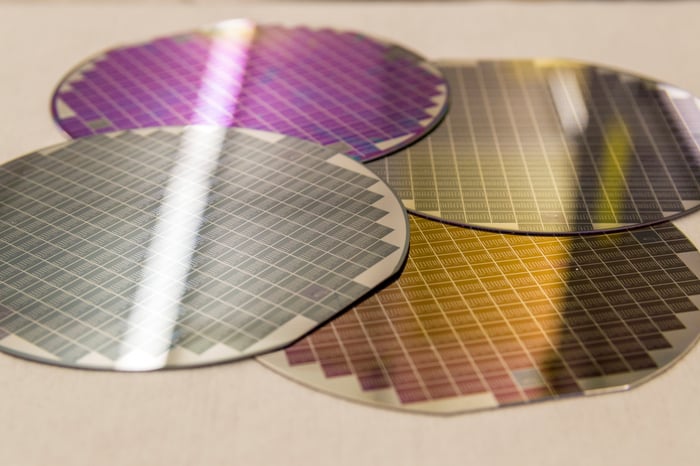 TSMC currently has a market cap of about $600 billion. Intel (INTC -0.70%), which believes it can reclaim the process lead from TSMC by 2025, has a market cap of just over $200 billion. Can TSMC stay ahead of Intel and become the world's first trillion-dollar contract chipmaker by 2025, or will its growth stall out before it hits that milestone?

Many analysts and chipmakers believe the global chip shortage, which was exacerbated by the pandemic, will last through 2023. The secular growth of the 5G, Internet of Things (IoT), home automation, data center, and consumer electronics markets should keep supplies low.

TSMC currently trades at about 13 times trailing sales. If it maintains that price-to-sales (P/S) ratio until 2025, it would be worth just over $960 billion. But as a market leader, TSMC could grow faster than the broader foundry market -- which also includes slower-growth companies like UMC and GlobalFoundries.

TSMC could be worth $1 trillion by 2025, but three challenges could prevent it from joining the 12-zero club. First, TSMC's price-to-sales and price-to-earnings (P/E) ratios are currently hovering near all-time highs. 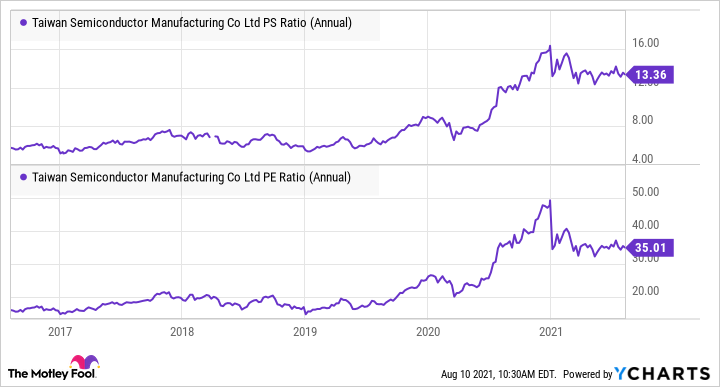 Many investors are paying a premium for TSMC because they assume the global chip shortage will drag on. As a linchpin of the global semiconductor market, TSMC is a natural play on this secular trend.

But investors might stop paying that premium if three things happen. First, Intel could gradually catch up to TSMC by aggressively expanding third-party foundry services. TSMC remains in the lead for now, but Intel's ambitious targets for 2024 and 2025 -- in which it plans to match TSMC and Samsung at the 2nm node and beyond -- will force TSMC to significantly boost its capex to stay ahead.

If TSMC fails to stay ahead of Intel, which is seeking the support of government subsidies in the U.S. and Europe to accelerate its plans, its growth could decelerate over the next five years.

Second, a growing number of chipmakers and analysts believe the current chip shortage will lead to a supply glut. TSMC, Samsung, Intel, and other chipmakers are all boosting their capex to address the global chip shortage by building new plants -- but doing so could swing the pendulum in the other direction and result in an oversupply of chips.

Lastly, geopolitical tensions could hurt TSMC. Its facilities in Taiwan, which manufacture its smallest chips, remain vulnerable to a potential attack by mainland China. It also faces pressure from the U.S. to cut ties with Chinese chipmakers and build more advanced plants in the U.S.

Focus on TSMC's core business instead of its market cap

TSMC has a shot at becoming a trillion-dollar chipmaker by 2025, but only if Intel fumbles its recovery, secular tailwinds (i.e. 5G, data center, IoT, vehicles) remain robust and prevent a supply glut, and geopolitical tensions between the U.S. and China wane. If any cracks start to appear, investors could stop paying a premium for TSMC's stock -- and the company could be worth a lot less than $1 trillion by 2025.

That being said, TSMC's core foundry business remains strong, and it will likely remain the world's most important chipmaker through 2025. TSMC's top clients probably won't switch chipmakers simply because Samsung and Intel are ramping up their spending -- so investors should focus more on its core strengths instead of wondering if its market cap will ever hit $1 trillion.